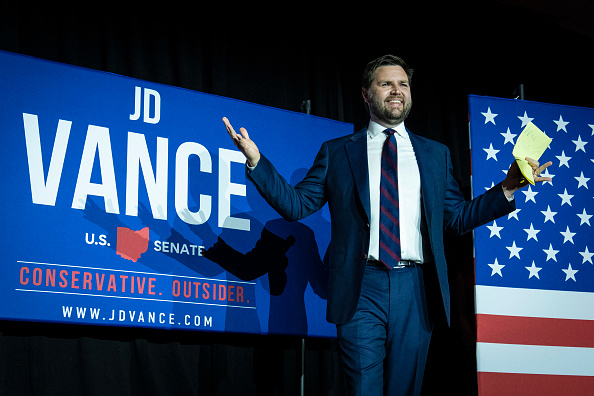 You’ve no idea the extent to which I loathe J.D. Vance. He’s not even a #!$#ing hillbilly! He grew up in Ohio! Visiting relatives in Appalachia does not make you a hillbilly, and writing a book called Hillbilly Elegy when you’re from Ohio makes you a carpetbagger! He profited by “eulogizing” a part of the country of which he had relatively little lived experience. He’s an opportunist!

That was made even more abundantly clear by the hard right turn he made in order to win the endorsement of Donald Trump, a man he called a “noxious” “reprehensible” “idiot” in 2016. He will say anything to earn a dollar or a vote, the kind of person that hillbillies used to be highly suspicious of.

But also, J.D. Vance — who is running neck-and-neck with Tim Ryan for a Senate seat in Ohio — believes that spouses should stay with their abusive husbands. For the kids.

“This is one of the great tricks that I think the sexual revolution pulled on the American populace, which is the idea that like, ‘Well, OK, these marriages were fundamentally, you know, they were maybe even violent, but certainly they were unhappy,” Vance said, via VICE. “And so getting rid of them and making it easier for people to shift spouses like they change their underwear, that’s going to make people happier in the long term.”

“Maybe it worked out for the moms and dads, though I’m skeptical, but it really didn’t work out for the kids of those marriages,” he said. “And that’s what I think all of us should be honest about, is we’ve run this experiment in real time. And what we have is a lot of very, very real family dysfunction that’s making our kids unhappy.”

You know what else makes kids unhappy, J.D.? Abusive households! If a man hits his spouse, you don’t think he’s also gonna hit his kid? And even if he didn’t hit his kid, the kid still has to live in a home where they are a witness to abuse, unhappiness, and fear. That is “very, very real family dysfunction,” sir.

Also, he’s skeptical that spouses who leaves their abusive partners are happier in the long term? What? Is his just right-wing word salad now?

Not for nothing, but kids have other reasons to be unhappy these days, too, like the fear of mass shooters, states that tell their teachers they’re not allowed to “say gay,” and an entire party that treats gays and lesbians like pariahs and trans and nonbinary people like they don’t exist. But sure, Vance: Getting away from a violent parent is the real problem.


← What a Crappy Thing To Do to Natalia Dyer | As Streaming Become the New Linear, Streaming Runs Into Linear Problems →