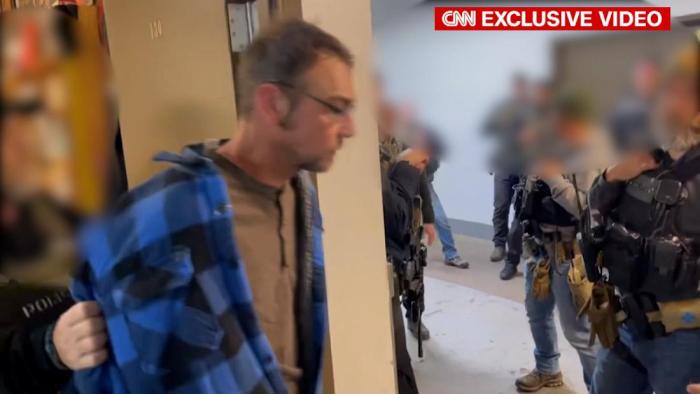 James and Jennifer Crumbley Found Hiding in an Industrial Building

“The Crumbleys left town on the night of the tragic shooting for their own safety. They are returning to the area to be arraigned. They are not fleeing from law enforcement despite recent comments in media reports.”
-Shannon Smith and Mariell Lehman, attorneys for the Crumbleys

The Crumbleys did not return to the area for arraignment. Instead, they were discovered “on the first floor of an industrial building” after a local business owner called 911 after seeing a woman standing near what appeared to be the fugitive’s vehicle. Police and K9 units discovered them in the building shortly after their car was found. It appears they were hiding from authorities with no intention to turn themselves in. They withdrew $4000 from the bank and turned off their cellphones so they couldn’t be tracked. It appears someone let them into the warehouse, which may come with its own charges. Detroit Police Chief James White stated the Crumbleys were “very distressed” when they were detained (good).

The Crumbleys face involuntary manslaughter charges for the students killed by their son, Ethan, on 11/30 at Oxford High School in Michigan. As previously discussed, James bought the gun with his son present; both Ethan and his mother posted it was his; the parents refused to remove Ethan from school despite multiple warning signs, and only once they heard about the active shooter did either of them attempt to contact their son or look for the gun. The egregious lack of parental responsibility led Oakland County District Attorney Karen McDonald to take the unusual step of charging the parents.

“They didn’t even disclose it at that moment or check to see if their son had that weapon, or go right home and look to see where the weapon was…. We know that because right after the public being notified about an active shooter, Dad drives to his house, and it was for one reason: to look for that weapon. And finds it missing, and then makes a 911 call and says this gun is missing, and I think my son is the shooter.

Of course, sometimes the enabling parents of school shooters are not charged because their child has already killed them. I suppose they should at least be relieved they didn’t end up like Adam Lanza’s mother, Nancy. It appears both James and Jennifer have their own issues, none of which come as a surprise. James abandoned two other families in his move to Michigan, and resisted paying even negligible child support.

Jennifer… Well, Jennifer is exactly what you’d expect. In 2016 she wrote an open letter to Donald Trump in the form of a blog post. In it, she justifies every bad act he ever made. She excuses, over and over, his misogyny, his tax fraud, and the rampant racism. She blames Common Core and “illegal immigrants” for her son’s educational failings.

And what makes me sick, is people that come over here from other countries and get free everything.
You see Mr. Trump, I need you to stop common core. My son struggles daily, and my teachers tell me they hate teaching it but the HAVE to. Their pay depends on these stupid fucking test scores. I have to pay for a Tutor, why? Because I can’t figure out 4th grade math. I used to be good at math. I can’t afford a Tutor, in fact I sacrifice car insurance to make sure my son gets a good education and hopefully succeeds in life. My parents teach at a school where their kids come from illegal immigrant parents. Most of their parents are locked up. They don’t care about learning and threaten to kill my mom for caring about their grades. Do you realize Mr. Trump that they get free tutors, free tablets from our Government so they can succeed. Why cant my son get those things, do we as hard working Americans not deserve that too?

She signed it “A hard working Middle Class Law Abiding Citizen who is sick of getting fucked in the ass and would rather be grabbed by the pussy.”

Class. Acts. All the way.