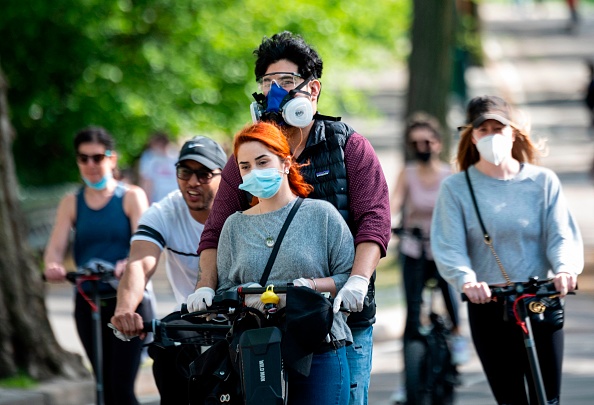 It's All Falling Apart Again

Well, here we go again. In the United States now, we’re averaging 45,000 new COVID infections a day, far from the 260,000 new cases we saw, on average, during the peak, but we’re up 180 percent in the last two weeks and the numbers continue to climb. During the first wave of COVID, we peaked at around 65,000 new cases, and it seems likely that we’ll reach that high again, at least. The little modeling that’s being done suggests that cases will continue to rise until around Labor Day before we head back down the curve.

Most of us can take solace in the fact that we’re vaccinated, and therefore unlikely to be infected. Or rather, unlikely at least to develop severe disease that might require hospitalization. That’s nice, and if it were a case where the unvaccinated lived on an island to themselves, I’m sure much of the vaccinated population might shrug and say, “Well, they get what they get.” But of course, it’s not that simple, not with those under 12 unable to get the vaccine. Not with immunocompromised people. Not with restrictions that will eventually need to be put back into place. This will mean the difference between hospital patients being able to accept visitors, or not. It will mean that we will run the risk of someone dying every time there is a wedding or a bachelorette party or a family reunion. It may mean remaining in our homes again this winter. It may again interrupt another school year.

If there’s some modestly good news, it is this: The rate of vaccination is actually rising in the places where COVID is hitting the hardest: Louisiana, Florida, Arkansas, Missouri, and Nevada, although I understand that Las Vegas as a city right now is a superspreader unto itself, which makes sense. It’s probably mecca for the unvaccinated, one giant, inside gathering place where COVID is recirculated in casinos. Moreover, some Republican leaders — Alabama Governor Kay Ivey, and Florida Governor, Ron DeSantis, for instance — are finally beseeching their citizens to get vaccinated, because they know now that they will probably carry some of the blame for the rising number of hospitalizations and deaths. But it may be too late. Why? Because this is what we’re dealing with right here:

Hospitalized guy refuses to get vaccinated—asked further if he would have wanted to prevent his #COVID19 hospitalization, he still doubles-down saying no. Should we charge higher insurance premiums for unvaccinated, like we do for cigarette smokers? pic.twitter.com/e2cO8qvwjl

How do you even argue with that? People would literally rather die than get vaccinated. The only way we’re going to get through this is if private entities get on board and force their employees to get vaccinated. Do what Sean Penn did: Hold up the production of an entire television series until everyone is vaccinated. Do what Fox News is doing (not what its talking heads are preaching), which is establish vaccine passports. Or do what the NFL is doing. From ESPN:

Unvaccinated players will be subject to severe protocols during training camp and the regular season, including daily testing, mask-wearing and travel restrictions. Thursday’s memo made it clear that unvaccinated players could, in theory, be responsible for the losses of games and paychecks as well … If the forfeit occurs, players from both teams will lose their game checks. The team that suffered the outbreak would be responsible for any shortfall in the league’s revenue-sharing pool and also would be credited with a loss for the purposes of playoff seeding, with the opposing team credited with a win.

Employers can do the same: Sick days are for the vaccinated, while the unvaccinated could be subject to daily testing and be compelled to wear masks. If corporate America wants to maintain its profits, they need to require their people to get the vaccine. As soon as the vaccine is officially FDA approved (hurry your asses, FDA), schools should require vaccines among their students.

If vaccines aren’t mandated, we’re never going to get out of this goddamn cycle, and these variants will only get worse. It’s either that, or we’re all going to have to join Tori in Vermont.

With 67% of their residents fully vaccinated, highest in the US, Vermont continues to show Delta can be contained and hospitalizations can actually decrease….the only state in the US that has done thathttps://t.co/3JXE7i0xOI
(What if the US had 67% instead of 49% fully vexed?) pic.twitter.com/eESERlJT3t