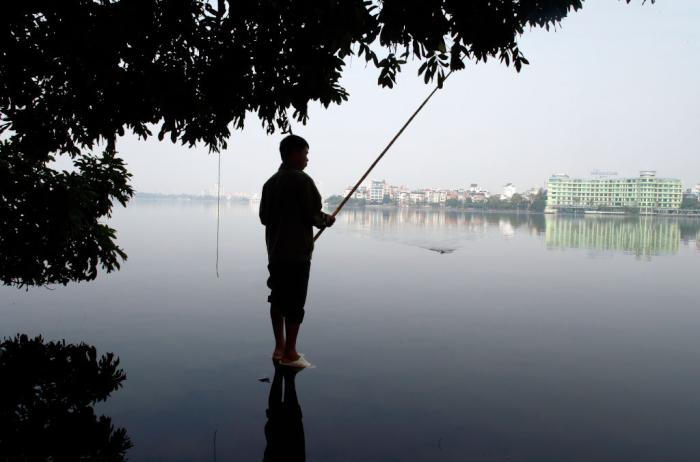 It Was a Nice Planet We Had Once

As many as a third of all global freshwater species are now at risk of extinction, according to a new report called ‘The World’s Forgotten Fisheries’ (PDF link), published by a group of 16 environmental organisations which includes Alliance for Freshwater Life, Alliance for Inland Fisheries, Conservation International, the WWF and Zoological Society of London. This is a huge disaster, not only from the perspective of biodiversity and ecological balance, but also for the communities of millions upon millions of often poor and/or Indigenous people who depend on freshwater fish for food and for livelihood.

A third of all global freshwater species, gone.

I don’t know about you, but every time I hear a new angle to the Anthropocene story it’s like being pummelled in the face with an iron made of overwhelming sadness.

How could it not, when you hear the statistics like the other ones behind this latest report into the effects of capitalist industry on the biosphere of the planet. According to ‘The World’s Forgotten Fisheries’, the number of migratory freshwater fish around the world has collapsed by 76% since 1970. That’s just half a century. 76%. It’s absolutely mind-boggling. If that wasn’t bad enough, in that same time the number of large fish—those weighing over 30kg—in the freshwaters of the globe have fallen by 94%. 80 species have vanished from the planet in that time span. 16 of those were in the last year alone.

Populations of freshwater fish are vanishing at this catastrophic rate due to a variety of factors—pretty much all of which can be laid at the feet of our species, specifically our industrial and economic models. Capitalism has always treated the natural world as an endless supply of raw material, its dogmatic, deadly logic seeing it all as there for the taking to fuel its ceaseless expansion and obsession with infinite growth that overwhelmingly benefits a tiny proportion of the population while exploiting or destroying the rest. Devastating practices like overfishing and other unsustainable fishing methods combine with pollution, damming, habitat degradation, ill-planned hydropower, sand mining, the introduction of invasive species, and climate change as a whole have led us to the situation we find ourselves in today.

There are more species of fish living in the fresh waters of our planet than there are in all the seas and oceans around the globe. The incredible, dazzling diversity of wildlife found in the lakes, rivers, ponds and other bodies of fresh water is one of the great wonders of this pale blue dot—so beautifully vibrating with an unimaginable variety of life that it is.

Or I guess we should start saying ‘was’, ‘were’, and ‘once found’, and other past tense terms, instead of the present. There were an incredible amount of species of freshwater fish. Once, the planet vibrated with life. That’s the place we’re heading; and in a number of ways have already arrived at.

According to the WWF’s ‘Living Planet Report’—just one, naturally very limited metric of biodiversity—found that the planet has lost, on average, 60 percent of its vertebrate populations in the last 40 years. That’s not to say that 60 percent of all vertebrates, as a total number, have been wiped out, rather that for the vertebrate populations that the report measures, there has been an average drop of 60 percent. Nevertheless, that is a truly apocalyptic number of animals disappearing from our planet—most often as a result of capitalist activity—at a rate that should send chills down every sensible person’s spine. The biomes in the most trouble are the tropical zones and freshwater regions—historically also the areas richest in biodiversity. The Anthropocene—or ‘Capitalocene’ as some would call it—has made short work of the eradication of Earth’s Edens.

‘The World’s Forgotten Fisheries’ report found that biodiversity destruction in freshwater ecosystems was proceeding at twice the rate of oceans and forests. Of the 18,000 or so freshwater species we are currently aware of, we have assessed the populations of about 10,000. Of those, roughly a third are currently at a risk of exctinction.

A few years ago, a study in the Proceedings of the National Academy of Sciences of the United States of America called ‘The Biomass Distribution on Earth’ painted a truly stark picture of what human economic systems have done to the planet’s animal populations. In terms of raw populations of species, it found that 70% of all bird species on Earth are now chickens and other poultry, and 60% of all mammal species are farmed by humans. This is not just a tragedy in terms of the number of wild animals lost and the awful treatment that farmed animals are subjected to, but a hugely contributing factor to the future of the planet’s climate, with farming practices and monocultures supporting those practices and deforestation and land confiscation all adding up to leading to a future that is nigh-on uninhabitable.

Truly, it was a nice planet we had once. Shame how it all ended up.