Is Elon Musk a Glomgold, a Beaks, or a Doofus?

A lot of digital ink has been spilled on Elon Musk over the past fortnight as he took an unprofitable but popular and influential publicly traded company, Twitter, and turned it into a digital nightclub with no bouncers. The few bartenders checking IDs are only turning away the guys pretending to be The Boss, everyone’s wallet’s been stolen, and the restrooms are a war crime. It’s going great!

I’m a simple man, with a simple man’s understanding of corporate finance and compliance officers and CISOs. And this is a pop culture site, not CNBC. So I spent some time thinking about and I finally came up with the perfect analogy for anyone who’s visited this site: 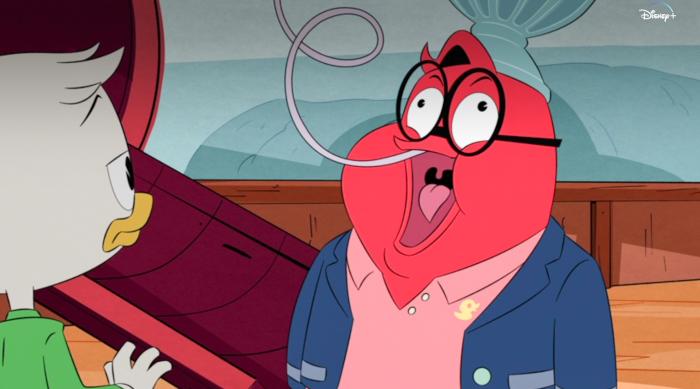 Drake, as everyone knows, is the insane and spoiled young duck on Disney’s 2017 reboot of their original hit cartoon, DuckTales. The animated comedy told the heartwarming tale of 3 young ducks, Hughie, Dewey, and Louie, their fearless friend Webbigail, and the lengths the 1% of Duckburg are willing to go in their quest to one-up each other. Whether it’s billion-dollar bets, plundering lost temples, or playing with the dark forces of magic, there’s nothing they won’t do to get a leg up on their competition. It was nothing like real life, obviously. 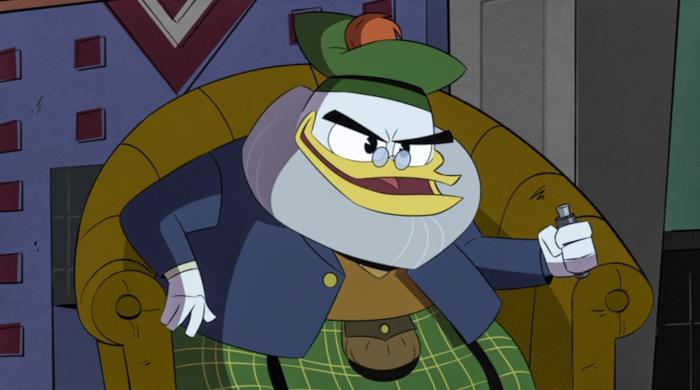 Of the show’s multiple billionaires Doofus is, at first glance, the least similar to Musk. There are two other ducks who serve as Musk stand-ins for the cartoon’s dissection of billionaire culture. The first is Flintheart Glomgold, aka the second richest duck in the world. This seemingly Scottish duck is actually a South African megalomaniac who took on the brogue and persona of Scrooge’s homeland in a bizarre scheme to become the world’s most beloved billionaire duck. He made his vast wealth through a series of schemes and white-collar crime, swallowing up other, more profitable companies into Glomgold Industries. Nearly all his business ventures are actually plots to kill Scrooge McDuck, and the remainder are undone by Glomgold’s erratic emotional state and lack of focus. The confidence he has in his own financial genius is inversely proportional to the talent he actually has. Every product off the Glomgold Industries production lines is riddled with flaws fatal to both product and owner. 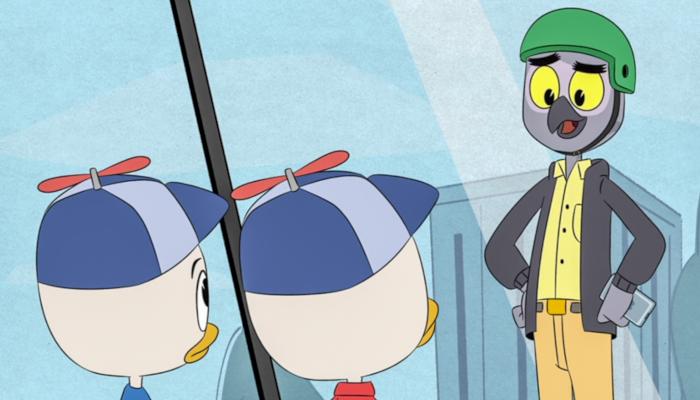 Second on the list of feathered fat cats to whom Elon Musk is spiritually related is social media mogul and “tech visionary” Mark Beaks. Thin, nerdy, and obsessed with popularity, this petulant parrot has a reputation for making something from nothing - that something is public buzz, stock value, and financial windfalls. And the nothing is literally that; nothing. An idea, a concept, the fleeting sensation of success without gaining anything of value. His few physical products are the stolen, open source plans of actual inventors, slapped inside a Waddle frame. Whether those products are a self-driving car or the suit of flying armor known colloquially as Gizmoduck, they have a nasty habit of causing catastrophic damage to their users and the public at the first hint of complication.

There are aspects to both these anthropomorphic birds that match Musk’s endless quest for popularity and financial conquest. Like Flintheart Glomgold, Musk is well known for absorbing other companies to lay claim credit for their scientific breakthroughs. Take Tesla, for instance, founded by Martin Eberhard and Marc Teppering well before Elon became its CEO. Like Glomgold, Musk is known for projects he says solve problems that are, by and large, already solved. Though useless in themselves, these projects serve to generate buzz and detrimentally impact his competitors. The Vegas hyperloop serves as an excellent example; Musk’s “visionary” plan for underground car tunnels crisscrossing futuristic cities boiled down to a less-efficient subway system that carries far few passengers and limits travel to a crawl, assuming it doesn’t shut down entirely in case of an accident. But it distracted from calls for further development in public transit and drummed up interest in Musk’s dubious Boring Company.

As for Mark Beaks, a character writers have stated is based on fellow billionaire tech weirdo Mark Zuckerburg, the similarities are just as apparent, particularly now that Musk has bought his own social media company to crash like a self-driven automobile. Both self-alleged tech geniuses have, in fact, created automated cars that do just that. Beaks’ B.U.D.D.Y. system, built off Gyro Gearloose’s Bulb Tech with its tendency towards malicious autonomy, is not unlike Tesla’s Autopilot system and its tendency to crash into objects at high speed. Both automobiles come with a list of flaws, such as homicidal rage, leaky batteries, and faulty brakes. But that’s okay, because whether its Beaks’ secret Project Ta-Dah! or Musk’s impulsive offer to buy Twitter for $44 billion, they’re only doing it for the lulz. Riddled with insecurity and the kind of inferiority complex that drives poorer men to pick fights with guys twice their size, they’re desperate for the kind of popularity only achievable when their names are on everyone’s lips. Both are driven by a pettiness that leads grown parrots to fake their own kidnapping and grown men to accuse rescue divers of pedophilia. And both are willing to sacrifice the health, well-being, and sanity of as many employees as it takes to get there. 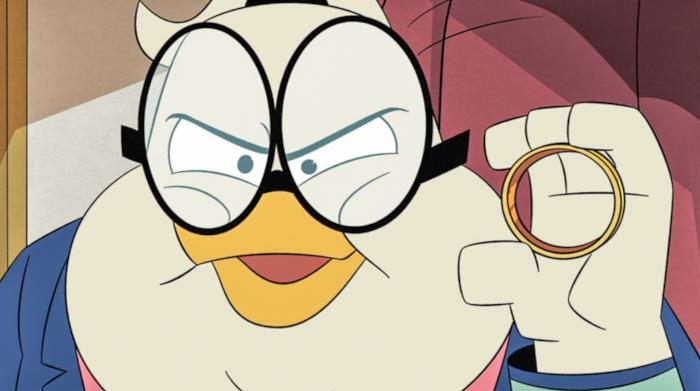 But these are surface similarities. Only one duck can be Musk’s spiritual twin; Doofus Drake. Inheriting obscene wealth after the death of his grandmother, Doofus was driven insane by the lack of limits imposed by his parents. He bought their home, turned them into servants, and was consumed by his own greedy, impulsive nature. Doofus has no concept of right or wrong; he smashes his possessions for the brief thrill of destruction. Everything is for him, and he can’t stand anyone trying to take what’s his.


Doofus lacks all control, including of himself. He melts down at the slightest hint of pushback, not unlike a billionaire making a week-long public spectacle of himself on his new social media platform. Though he lacks an online presence or industrial empire, Doofus is still starved for attention, and at one point holds Louie prisoner in his mansion so he can have a friend. But even as he fulfills every fleeting desire, Doofus’s eyes remain blank. He’s painfully weird, lacking social skills or understanding of common cues. He is a creature of impulse and his temper tantrums expose the hunger that is his core. He wants everything though nothing can satisfy him, because he is ultimately empty. He smashes what he can’t own or no longer needs, out of boredom or petty anger.

This is what one finds inside Elon; nothing. He wants everything — wealth, power, fame, and above all adulation — but none of it satisfies. It’s why he’s got 10 kids and no sign of slowing down. It’s why he promises big but delivers small, if at all. The cave rescue in Thailand was a prime example of this; after 12 young divers became trapped underwater, Elon took an interest and had his people build a submersible to attempt a rescue. It wasn’t necessary, nor was it certain it would even work given the cave’s narrow spaces and tight corners. Musk didn’t react well to being left out of the rescue, first pushing back against the head of the joint command center, Narongsak Osatanakorn after the man briefly mentioned the submersible’s lack of practicality in the real-world situation. Then, when a British diver pushed back against Musk’s petty response with a blunter description of the submersible’s flaws, Musk went on a full offensive, going so far as to call the man a pedophile. He later withdrew the statement, marking one of the few times he’s apologized for his frequent outbursts. It was a prime example of Elon’s empty gestures. It was during this same period he promised to fix Flint, Michigan’s water system, still filled with toxic lead after all these years. He’s done nothing since. Similarly, he promised free ventilators to hospitals during the Covid crisis; his company delivered BPAPs instead.

This brings us to Twitter, the latest in his string of “accomplishments.” Elon promised a new era on the social platform, one of limitless free speech and political neutrality. He promised blue checks for everyone regardless of their qualifications or identity. His good intentions, real or otherwise, swiftly changed. Within a week he fired fully half of the 7,500 employees. He recommended US voters support GOP politicians during the midterms. He began blocking impersonators, but only if they impersonated him. He tried to sell the world on a $20/month verification system that met with immediate backlash, even after a proposed price drop to $8/month, which was undoubtedly the price he intended all along. He implemented a “two check” system, where field experts, actors, politicians, etc. would continue to receive the Verified check that confirmed they are who they claim to be, and another blue check, indistinguishable at a glance, that indicates someone paid. The results have been mixed, bordering on disastrous. He forced the remaining workforce back into the office in defiance of Twitters “work from anywhere” policy, showing a profound lack of understanding about how IT professionals do their jobs. In the latest setback, his CISO, chief privacy officer, and chief compliance officer all quit, as did his head of HR. The FTC, already focused on Twitter after several privacy breaches and policy issues, is watching closely as Elon’s lean, mean, erratic new management style leads the company down a dangerous path towards exorbitant fines.

Twitter may not survive Musk’s leadership. Whether that’s deliberate, who can say? Did Musk intend to genuinely improve Twitter, only to find his lofty goals impeded by the real world yet again? Is he still hoping to fix it, or is he letting it fail over our unwillingness to follow his vision? Is he doing it out of spite, or is there a financial windfall in this for him, one that balances Twitter’s price tag with favors from his financiers in Saudi Arabia? Or maybe Russia, whose constant military failures are now much less visible on the platform. If Twitter goes down, so does the easiest method Ukrainians have to inform the world of Russia’s war crimes, and an easy way for labor unions, dissidents, and other folks without much power to organize efforts. Twitter may have more problems than solutions, but it does have value. Or it did, before Musk’s ongoing crises gave him reason to smash it.

It’s impossible to diagnose all of Elon Musk’s foibles and characterize him as a single animated bird. He’s certainly no Scrooge McDuck, who made his money through being “tougher than the toughies, and smarter than the smarties.” For all his hoarding of resources and stereotypical Scottish temper, Scrooge has integrity and compassion. He puts his money back into the town - a town he technically owns but has granted to the citizens of Duckburg. He uses his resources for the betterment of duckdom,even if he keeps enough gold to swim in. Scrooge’s design is a reminder of a time when the wealthiest spent at least some of their money on vanity projects that improved society. Museums, bridges, charities, and other public works. They came with strings and were built with ulterior motives but it was something. Scrooge does all this and more.

Elon Musk was born into wealth and power. He’s never known anything else. He doesn’t understand hard work and determination. He’s never had 3 ghosts visit on Christmas Eve to set him back on the right path. Ultimately, he’s an amalgamation of Duckburg’s least pleasant billionaires. He has Glomgold’s impulsivity and spite. He has Beaks’s desperation for popularity and lack of follow-through. But his core is the same empty, famished vacuum found in a spoiled rich brat without empathy or consideration of others. In his heart, Elon is, and will always be, a Doofus. 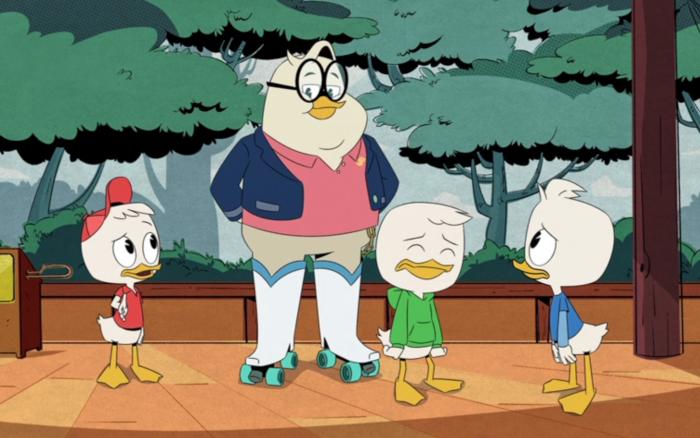 ← Chris Evans Has a New Girlfriend, and He's Letting the Media Know | In Praise of Quiet, Subtle Performances in Film →