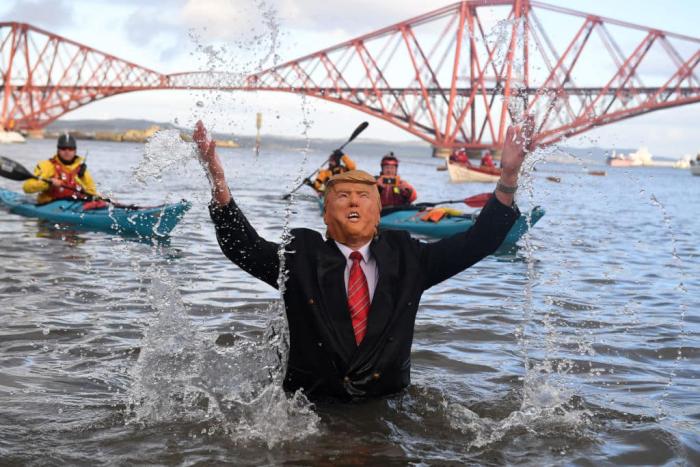 Is Donald Trump Going to Run Off to Scotland To Avoid Joe Biden's Inauguration?

It won’t be long before Donald Trump is out of the White House — possibly forcibly ejected by the Secret Service — and Joe Biden is the 46th President of the United States. Donny is, of course, handling this all as well as we expected, with denial, subterfuge, and a sprinkling of full-on treason. He and his goons are doing everything in their power to stop the transfer of power, and the only thing seemingly stopping them from a straight-up coup is their immense stupidity.

It was always unlikely that Trump would attend Biden’s upcoming inauguration. Now, according to the Herald, one of Scotland’s biggest newspapers, he may choose to flee the country and hide out in my neck of the woods.

The paper reports that Prestwick Airport has been told to expect the arrival of a US military Boeing 757 aircraft which has been occasionally used by Trump, on January 19th, the day before Biden steps in. Prestwick is the airport nearest to his terrible golf course on Turnberry. This would fit with rumors that Trump already plans to announce a 2024 re-election run during Biden’s inauguration because he’s a pathetic little sh*t like that.

Scotland is currently in full lockdown due to the current COVID-19 pandemic, so if he does choose to fly in, he would be in breach of the Scottish government’s restrictions. His own golf resort is closed because of this. So, of course, he’ll ignore all that and continue his superspreader crusade on the other side of the Atlantic.

Us Scots will, of course, give Trump the full patriotic welcome.

Trump: I’m going to go to my Scotland property the last day of my term, so I can’t be arrested.

Possibly an attempt to avoid prosecution in NY, by hopping elsewhere?

I spent a good amount of time in Scotland after Trump was elected, & can tell you…

They fucking HATE him there 😂😂

I hear Trump is coming to Scotland but I can’t protest at Turnberry as we are in lockdown and can’t leave our postcode pic.twitter.com/KXoFVWIu7l

Scotland reaction to rumors Trump is heading their way should be that they are coordinating with the Hague. They do not like him. The fact is, they are who coined calling him a "Shit Gibbon" pic.twitter.com/BnopMOoZ3E

I don't think Scotland is going to be welcoming Trump with open arms. pic.twitter.com/tD96lbZn4P