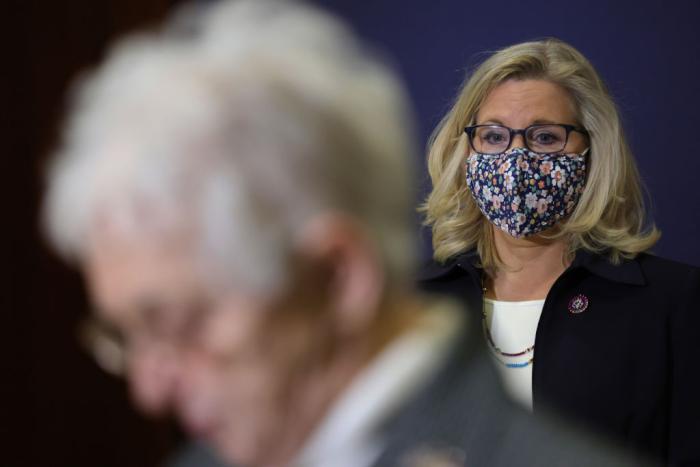 “It’s probably better to have him inside the tent pissing out, than outside the tent pissing in.” Lyndon B. Johnson’s famous quote regarding J. Edgar Hoover has been misquoted and wrongly attributed since he said the words, but there’s a kernel of truth there. It’s an axiom of modern life that you don’t, in fact, have to “hand it to them” when the “them” in question is terrible. You don’t have to give Mussolini credit for getting the trains to run on time, especially since he didn’t. George W. Bush doesn’t get credit for painting immigrant portraits after what he did to the Middle East. And Liz Cheney doesn’t earn brownie points for publicly rejecting “The Big Lie” of election fraud. Accepting reality does not rate even a participation trophy. She is not Rey Sheev to Dick Cheney’s Palpatine.

But she is right. The third-ranking House Republican faces a vote tomorrow, which is expected to strip her of her leadership role in Congress because she’s willing to accept reality rather than live in a dreamworld where Donald Trump remains the rightful President. She’s likely to be replaced with Trump devotee Elise Stefanik. Her party’s quixotic embrace of Trumpism is so complete that even publicly stating the obvious comes with dangers. Unable to win elections without appealing to the white nationalist tribalism of an ever-dwindling proportion of caucasian voters, Republicans are now required to toe the line on the most inane bullshit imaginable or risk being primaried by wild-eyed fanatics so nutty they’re practically almonds. Cheney’s name recognition and home-field popularity might be enough to protect her from right-wing challenges but they can’t protect her from the colleagues who’d rather lick the boots kiss the ring in allegiance to a liar.

It’s safe to say Liz Cheney is so far to the Right that she and I see very little in the same light. Apart from her acceptance of reality around the election and Covid-19, I can’t think of a damn thing. I’d like nothing more than to see her hit the bricks after being replaced by a progressive or even moderate Democratic representative. But it’s not as though we’re spoiled for choice. Wyoming’s last Democratic representative left office in 1978; their last Democratic Senator in 1977. Increased partisanship and a white population of 92.5% doesn’t exactly bode well for the future in that regard. Likewise the fact that almost 70% of residents voted for Trump in 2020. And I’d rather have Liz Cheney inside pissing out, possibly through a funnel, than a MAGA goon pissing in.