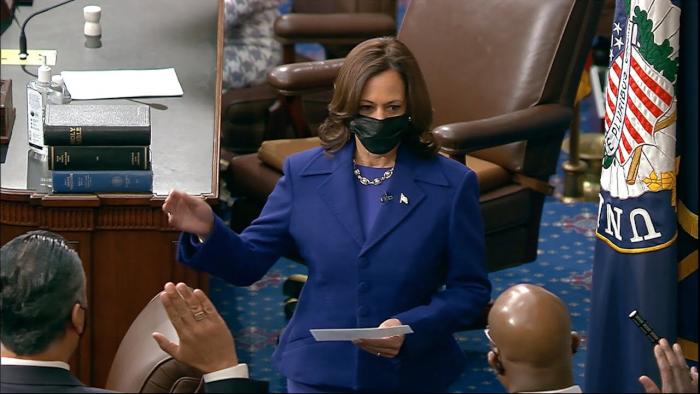 Inauguration Updates: We Have a Real Press Secretary Again!

7:41 — We have a press secretary. And she answers questions. And expressed a desire to do so daily! And she, like, doesn’t lie! This is so amazing.

Psaki takes a question from Fox News's Peter Doocy, who asks her a leading question about if Biden should discourage the Senate from holding an impeachment trial for Trump. Psaki says she's "confident" the Senate can "multitask" pic.twitter.com/AQZGJXx1KH

Press Secretary Jen Psaki, at the end of the first Biden press briefing: Thank you, everyone. Let’s do this again tomorrow.

5:45 — Here’s that New Radicals reunion, which is more emotionally affecting than I thought it might be. Also, fun fact: He hasn’t washed that hat since 1998.

We are honored that the New Radicals reunited for this moment (featuring one of @SecondGentleman Doug Emhoff's favorite songs!) 🎶 #Inauguration2021 pic.twitter.com/UUHmyAwxQ0

5:30 — Biden is now signing Executive Orders. First up, an EO mandating masks on federal property; then one to show “support for underserved communities”; and then a third EO to rejoin Paris Climate Accord. He’ll also sign an EO ending the Muslim Ban.

5:15 — I’m very sorry in advance for how hot this is going to make you all. If you have a cigarette, you’re going to need it. Take it away, Kyle:

The Senate chamber breaks into applause as Kamala Harris arrives to preside over the Senate as Vice President of the United States.

Democrats now, officially, have the majority in the Senate.

The kid can finally mow in quiet.

Chrissy is no longer blocked by the POTUS:

…the utter politeness of this savagery https://t.co/jSzRAjyHfM

Thx @Lin_Manuel ! Did you catch the 2 @HamiltonMusical references in the inaugural poem? I couldn’t help myself! https://t.co/22UTKkGTLq

Feeling a little like Leslie Knope in this pic today: pic.twitter.com/Bx8ZIiSq6P

12:25 — As a Southerner, I can’t hate Garth, but this Amanda Gorman poem is tremendous. “We will rebuild, reconcile, and recover.”

How it started How it's going pic.twitter.com/xnYhDUzomG

12:00 — It’s official. Trump’s done. Also, Biden is giving one hell of a classy speech. He hasn’t mentioned “carnage” once.

The 47th President (fingers crossed) is also ready to serve.

11:52 — Joe Biden sworn in as the 46th President of the United States. The last four years are over. The next four years begins.

Joseph Robinette Biden Jr. is sworn in as the 46th President of the United States pic.twitter.com/dusruIqmCK

His Bible, as Professor Wilson notes, looks like some “Game of Thrones shit.”

As expected, @JoeBiden will be sworn in using a Bible that has been in his family since 1893 and was used during his swearing-in as VP in 2009 and 2013. It was also used each time he was sworn-in as a US Senator. It is five inches thick with a Celtic cross on the cover.

11:50 — Well, I held it together until J. Lo sang a Woody Guthrie song. This is a really beautiful inauguration, by the way, in spite of the pandemic. Crazy lovely.

Woody Guthrie, who wrote "This Land is Your Land," with his guitar. pic.twitter.com/qsxfJ6WfSC

11:45 — Kamala Harris sworn in as the first African-American, Asian-American, and female Vice President by Sonia Sotomayor. I think I got a few ceiling shards on me.

Kamala Harris is given the oath of office by Justice Sotomayor pic.twitter.com/AdRnDXuLWN

11:40 — Gaga kills it with the outfit and the tearful performance.

11:30 — Castleton with what I like to think of as a wonderfully janky haiku:

All washing away Maga red.

11:02 — With the exception of three (THREE) Supreme Court justices, and some select Congressman, there’s something kind of remarkable about the fact that the Trump family isn’t in attendances, and how the Inauguration almost looks like a transition from Obama’s Administration straight into Biden’s. Obviously, that is not true of the country, but at this Inauguration, Trump has been erased/erased himself.

And as soon as I say that, Mike Pence strolls in to remind us of the last four goddamn years.

10:32 — Oh wow. This is incredible. Eugene Goodman, the Capitol Police officer who led rioters away from the Senate chamber, will escort Kamala Harris at the inauguration as the new acting deputy House Sergeant at Arms.

10:30 — Paul Ryan is in attendance. So is Jim Jordan (ugh) and Ted Cruz. And here’s a fun tweet from CNN’s Kaitlan Collins: “President Trump’s transportation secretary Elaine Chao, who resigned in protest over his response to the deadly riot, just arrived at the inauguration with Mitch McConnell, who has said he has no plans to ever speak to Trump again.” I don’t really care about all of these Republicans, including Mike Pence, attending the Inauguration, except as it relates to the snubbing of Biden’s predecessor and because it shows a peaceful transition of power. Also, EVERYONE IS WEARING A MASK.

The entire crowd at the Capitol is wearing masks. There is no social pressure from the commander in chief to not be masked. @MSNBC

Meanwhile, this story is getting a lot of attention this morning (in fact, the Times seems to have changed the headline) and I get it! It’s crap! But also, it’s so much better than, say, “Trump Urges Unity Against Racism” (remember that one?) or “Deportations Begin.”

folks we are back to Dijon mustard and tan suit level scandals pic.twitter.com/9iMPzgQlef

The QAnon influencer who was moving the goalposts earlier this morning is now claiming Biden has been part of QAnon all along. pic.twitter.com/z7bCi1FsXP

Congratulations to my friend, President @JoeBiden! This is your time. pic.twitter.com/LXzxGnBAfz

And so does Greta Thunberg. Heh!

He seems like a very happy old man looking forward to a bright and wonderful future. So nice to see! pic.twitter.com/G8gObLhsz9

9:35 — And so we begin to rebuild the country, bring some dignity back to the joint. This morning, Joe Biden — only the second Catholic to be elected POTUS (after JFK) — is in church with leaders of both parties: Pelosi, Schumer, Hoyer, McConnell, and McCarthy are all in attendance.
May the rest of the day be eventfully uneventful.

We are learning, for what it’s worth, that Biden’s predecessor did leave a note for him in the White House.

While we’re awaiting the Inauguration, here’s a few things we can expect in the first day or two of Biden’s Administration: He will sign executive orders rejoining the Paris Climate Agreement; revoking the permit for the Keystone Pipeline; he will extend the eviction and foreclosure moratorium and student loan forbearance; the Muslim ban will be rescinded; work on the Wall will cease; Trump’s ban on transgender military service will be rescinded.

Meanwhile, in the first days of the Administration, Biden will send a $1.9 trillion stimulus bill to Congress; he will sign an executive order mandating masks on federal grounds, and in places like airports and subways; he will sign an EO invoking the Defense Production Act to ensure faster production and distribution of COVID-19 vaccine; he will establish a national strategy for vaccine distribution. He’ll sign an Executive Order to start the process of eliminating private prisons; he will direct the federal government to strengthen engagement with tribal governments; he will set up a task force to reunify children separated from their families; and he’s expected to send a broad Immigration bill that would provide a path to citizenship for an estimated 11 million undocumented immigrants in the United States.

How amazing is that? It’s like he’s completely reversed the ocean’s waves.

The fog is lifting.

The image in the header at the moment, by the way, comes from artist Jagjot Singh Rubal in his workshop in India, where he — like most of the rest of the world — is as relieved as we are about the inauguration of Joe Biden.