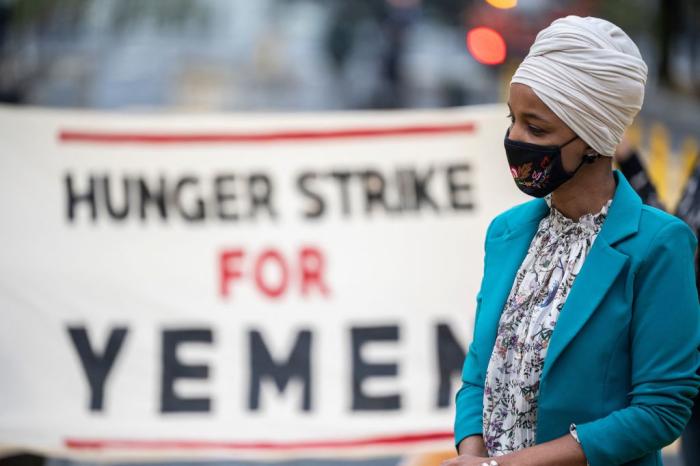 Ilhan Omar is in the news thanks to pissing off all the right people again. In trying to draw attention to the skewed application of moral judgement and International Criminal Court attention, the Minnesota representative tweeted on Monday that, ‘We must have the same level of accountability and justice for all victims of crimes against humanity’. A statement that a lot of politicians make. Except most politicians use it as a verbal smokescreen, a non-entity, something that is used to disguise reality rather than illuminate it. Omar, on the other hand, pointed the finger explicitly when deploying it, saying further that ‘we have seen unthinkable atrocities committed by the US, Hamas, Israel, Afghanistan, and the Taliban’

We must have the same level of accountability and justice for all victims of crimes against humanity.

We have seen unthinkable atrocities committed by the U.S., Hamas, Israel, Afghanistan, and the Taliban.

I asked @SecBlinken where people are supposed to go for justice. pic.twitter.com/tUtxW5cIow

Uh-oh. She said the unsayable.

Wow, a rare statement from the *entire* Dem leadership on this pic.twitter.com/dlhD3nGkkw

That’s right, a unified statement from the leadership of Omar’s party, condemning her for ‘drawing false equivalencies between democracies like the U.S. and Israel and groups that engage in terrorism like Hamas and the Taliban.’ After forcing a climbdown from Omar on Thursday, they concluded self-righteously: ‘We welcome the clarification Congresswoman Omar that there is no moral equivalency between the U.S. and Israel and Hamas and the Taliban’.

Where do you even start?

Putting aside the ridiculous practice of calling the U.S.—described in a famous Princeton study, and evident to anyone with any critical thinking capacities, as an oligarchy with only a white sheet with ‘democracy’ daubed on it draped over it—and Israel—an non-democratic state—democracies, the statement from the Democratic leadership illustrates clearly two well-established aspects of the political environment in the U.S.

1. You cannot criticize the empire.

2. You definitely cannot criticise the empire if you are a member of what the rising fascist rhetoric of the moment defines as an out group. Omar, as an immigrant Muslim woman of color, is a member of several of those out groups. As such, she is perpetually in the crosshairs.

I’ve seen some takes that are critical of the Democratic statement framing the issue as one of the Dems being cowardly, or buckling to some external pressure. I don’t think that’s the right way to look at it. This is who they are. They resolutely believe in the American empire’s exceptionalism and right to destroy anything it sees fit in its pursuit of profits and power—yet they also apply a very sophisticated and deeply internalised method of doublethink to justify it to themselves as morally right, because in their eyes the U.S. empire is a priori a force for good in the world. They buckle to internal, self-applied pressure before any external pressure even has a chance to get out of bed in the morning. The fact of the matter is that the U.S. has committed atrocities, and still is, and will continue to do so. The Dems are right in some way: There really is no equivalency to be drawn. As Harold Pinter once put it:

The crimes of the United States have been systematic, constant, vicious, remorseless, but very few people have actually talked about them. You have to hand it to America. It has exercised a quite clinical manipulation of power worldwide while masquerading as a force for universal good. It’s a brilliant, even witty, highly successful act of hypnosis.

Nancy Pelosi and her ilk should ask the people of Iraq, Iran, Palestine, Indonesia, Guatemala, Japan, Korea, Vietnam, El Salvador, Nicaragua, Greece, Afghanistan, Libya, Cuba, Syria, Laos, Cambodia, Angola, Lebanon, Somalia, and Sudan, to name just a few, what they think about the actions of the ‘democratic U.S.’ just since WWII. Countless millions lives extinguished, brutally and without remorse. The violence perpetrated by the US is in a league of its own.

In 1965, the CIA worked with Indonesian embassy political officer Robert Martens to supply soon-to-be-dictator General Suharto’s forces with the names of thousands of communists and suspected communists, knowing full well what those lists would be used for. As well as intelligence, the U.S. also covertly supplied arms, communications equipment, and financial incentives to Suharto and his forces in their rebellion against President Sukarno—as well as fomenting the insurrection in the first place. The resulting bloodbath would be one of the worst genocides of the 20th century: Between 500,000 and 1,200,000 people killed. As reported by journalist Vincent Bevins in his 2020 book ‘The Jakarta Method: Washington’s Anticommunist Crusade & the Mass Murder Program that Shaped Our World’:

‘It really was a big help to the army’, said Martens, who was a member of the US embassy’s political section. ‘I probably have a lot of blood on my hands, but that’s not all bad.’

‘I probably have a lot of blood on my hands, but that’s not all bad.’ Couldn’t really ask for a neater summary of the U.S. empire’s own reflexive view of itself.

Of course, many individuals within the system draw the mask over their own eyes, and refuse to even acknowledge the blood. At least publicly. Which is why they go so viciously after someone like Ilhan Omar, who says the unsayable by stepping just a tiny bit outside of the accepted bounds. Because of who she is, Omar is frequently subject to attacks from sources like the U.S.’s rising far right. Those attacks are echoed, in less vicious rhetoric, from more mainstream places. The constant undermining, silencing, and threatening that Omar faces from the Democratic establishment due to her identity and her often anti-establishment positions only serves to further legitimise the more drastic attacks that come from the far right. Both groups are acting out of racism as well as a defence of the status quo (which, I mean: hello, tautology!).

What’s even more galling about this whole episode is the way the Democratic leadership chose to communicate with Omar about her tweet. By going public with their statement and without approaching her first. As Omar herself tweeted:

It’s shameful for colleagues who call me when they need my support to now put out a statement asking for “clarification” and not just call.

The islamophobic tropes in this statement are offensive. The constant harassment & silencing from the signers of this letter is unbearable. https://t.co/37dy2UduW0

They never have this type of energy to pass popular policies only to keep a dissenter in line. The Democratic Leadership is a joke. Where is this energy for Biden to cancel student debt or for Joe Manchin to vote to abolish the filibuster?https://t.co/5AtTMw91zU

As tough as it was to see his 9-year-old son die right in front of him, I’m sure Mohammad Kinani took some solace in the fact that he was killed by a state-backed Blackwater convoy and not some awful terrorists! /s Our president pardoned his killers and hardly anyone cared…

And she barely said anything, that's the hilarious part. She put one toe outside of acceptable american discourse, and then you've never seen the Dem establishment move more quickly.

The machine can work fast when it wants to

The thing about Ilhan Omar is that she has a *very* different perspective on American empire than the “moderate” former CIA Democratic politician type, and she’s not shy about saying so.

Pretty sick & tired of the constant vilification, intentional mischaracterization, and public targeting of @IlhanMN coming from our caucus.

They have no concept for the danger they put her in by skipping private conversations & leaping to fueling targeted news cycles around her.

I'm not surprised when Republicans attack Black women for standing up for human rights. But when it’s Democrats, it’s especially hurtful. We’re your colleagues. Talk to us directly.

Enough with the anti-Blackness and Islamophobia.

Our statement in support of Rep. @Ilhan: pic.twitter.com/iBU7ZZDAkl

Democratic Party foreign policy hawks: “We can’t directly condemn Netanyahu because the situation is nuanced and complex, @IlhanMN on the other hand…”

the united states has caused significantly more terror worldwide than the taliban and hamas combined. this shouldn't even be a controversial statement, since it's a fact and yet the democrats chose to pile on ilhan omar for even asking for accountability. some democracy we are.

What was it that Major General Smedley Butler said about his time in the U.S. Armed Forces?

I spent 33 years and four months in active military service and during that period I spent most of my time as a high class muscle man for Big Business, for Wall Street and the bankers. In short, I was a racketeer, a gangster for capitalism. I helped make Mexico and especially Tampico safe for American oil interests in 1914. I helped make Haiti and Cuba a decent place for the National City Bank boys to collect revenues in. I helped in the raping of half a dozen Central American republics for the benefit of Wall Street. I helped purify Nicaragua for the International Banking House of Brown Brothers in 1902-1912. I brought light to the Dominican Republic for the American sugar interests in 1916. I helped make Honduras right for the American fruit companies in 1903. In China in 1927 I helped see to it that Standard Oil went on its way unmolested. Looking back on it, I might have given Al Capone a few hints. The best he could do was to operate his racket in three districts. I operated on three continents.