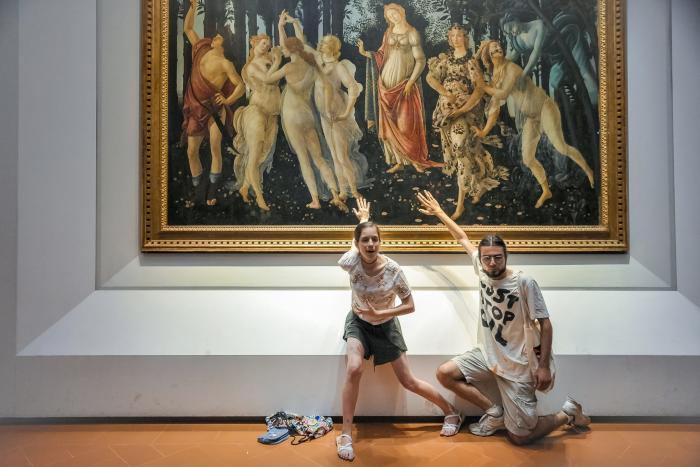 If You Want to Save the World, Choose Your Targets Wisely

I try to avoid letting the pattern-seeking part of my brain take over, because I could easily fall into conspiranoia. Conspiracy theories are for the kind of people that read while moving their lips. SORRY. Then again, I come from a whole Continent where we’ve seen more operatic things than a cabal of powerful shadowplayers planning history. All of this to say, I am so really tempted to believe that this phenomenon of idiots throwing tomato soup, mashed potatoes and/or glueing themselves to classic paintings is something paid for by the oil lobby. I don’t want to believe that, I believe these idiots are stupid enough to do it for free, but I wouldn’t be surprised to find out the Al Saud family is bankrolling the operation (and/or bribing the museum guards who seem to show… a very repetitive pattern of incompetence). Whatever the case might be, this is not the Direct Action you’re looking for mates. As activist Sam Bilal put it, in the right exact words: 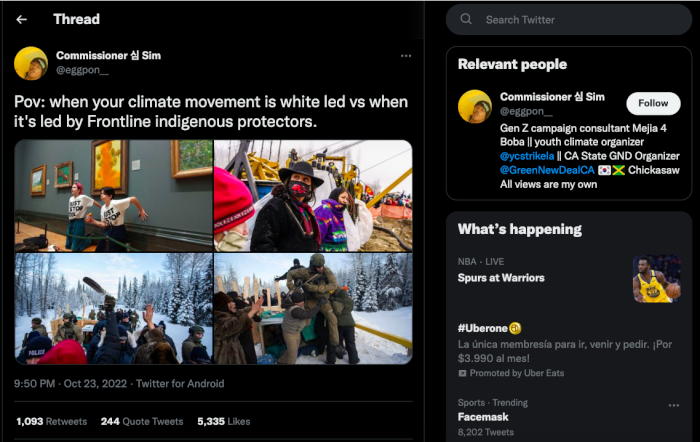 I will confess, it’s been a while since I’ve fully engaged with political activism, but one thing I kept noticing is that for any progressive movement to succeed, for any sort of action that seeks to move the needle to a Left when the consensus is on the Right, you need to have a cool head. You need to smother the Theatre Kid living inside you and you need to replace it with whatever cognitive skills will be most useful. Or in other words: Performance art won’t save the fucking world. I will be adamant about this, vandalizing works of art is just a worthless performance that does nothing but puzzle your target audience.

To boot, it’s founded on the most misguided of notions: there will be no art to appreciate if the planet dies. Which is the first misconception these Theatre Kids are working with: The Earth will recover from us just fine, even if our actions have earned ourselves an entire -cene layer, the Earth’s Deep Future will erase even the highly radioactive material we’ve developed. It’s human civilization that’s at risk, it’s the worth of billions of lives, usually living south of the museums that were targeted. Now, riddle me this Euro-dweebs, what is one of the few things that can rebuild society after it has collapsed?

These pseudo-activists, in a predictable twist of fate, bought into one of the worst, most toxic mistakes of the capitalist mindset: That Culture is not a priority compared to Economic self-sustenance, as if the former were a mere distraction and a waste of resources, instead of being complementary at the very least. You know what? Just having to explain this and shitting on Maslow’s stupid pyramid is giving me a headache. Just go and watch The Secret of Kells, it makes this same exact point with more insight and class. Watch it, take notes, rethink everything you’ve been doing because this is just a waste of time, privilege and attention. I mean, come on guys, you’re vandalizing the few pieces in European museums that weren’t looted!

Luckily, not a single of these art pieces have been damaged so far. Credit where credit’s due, these performers probably were targeting paintings that they knew were protected by panels of glass. Nevertheless, was it worth it? They claimed they were trying to shake up consciousness, to create awareness and stir up action. Did it? Because from what I’m seeing, it has only reverted us back to the most pointless conversation in Left-wing circles: The means and tactics towards political action in which a vociferous crowd insists everything goes and everything works. A vociferous crowd that always seems to be losing.

If we can agree that vandalizing works of art is… not it, how about blocking streets and motorways in protest? It certainly is a more effective way of conveying the urgency of the Climate Crisis. By targeting the literal arteries of the fossil fuel-based economy, they do something visible, something that opens up conversations about car culture and sustainable cities and provide fodder for certain twits to make asses of themselves. I have mixed feelings about this tactic because ultimately, you are not targeting the real culprits of our Climate Crisis. Just regular folks, among which are many who are simply too busy, too entrapped by the structure to give activism the time of day. There is a good argument to be made that those kinds of people are exactly the ones that we’re not going to convince, but they do make up for a loud and sizeable group, the kind that can fear-monger the undecided into voting against their own interests, as in mankind’s interest. In a backward democracy such as Britain, with a First-Past-the-Post electoral system, those marginal ebbs and flows in popular support can easily be overrepresented.

Ironically, it seems that I am entrapping myself (and you reader) in this damn, unending discussion on the means and tactics towards political action. Leftists, environmentalist political action. But it is a conversation we must have, and one that actually needs to set forth defined protocols because as things are going right now, we seem to be operating on doomscroll logic and scattered anxiety. Lost in that rattle and in the Keir Starmers of the world, we forget that the problem is not in the type of Direct Action, but in how we are choosing our targets. The further irony is that we have always known who the targets should be.

Direct Action has to target those in power and the owners of capital. It is their lives we should inconvenience.

Legal Disclaimer: We are not here, under any circumstances, encouraging or endorsing violence against right-wing politicians, oil lobbyists, billionaires, millionaires, and big-oil execs that make at least six figures, nor anyone associated with it or their property. We are merely … acknowledging the fact that protests should be addressed to them.

For example, shout-out to the people who have been blocking airports catering to private jets. You don’t even need people to do that, just a tiny commercial drone can slow down the schedules of C-Suiters in terms of hours or even days. Shout out to the people spray painting Aston Martin dealerships or the branch offices of Barclays (some included vicars!).


Now let’s imagine, merely as a hypothetical, what else can be done to worsen the lifes of the privileged and powerful. For example, how about instead of attacking the works of art that are actually available to the public, somebody, ahem, “borrowed” the piles of artworks being stored by private collectors (and ultimately, private equity funds) in secure warehouses? Or again, hypothetically, how about you were inspired by a certain anti-fracking plotline in the (woefully underrated) Santa Clarita Diet? A show that was probably cancelled because of said anti-fracking plotline? Also, megayatchs … cumbersome, slow, usually berthed and repairing them usually provides for hundreds of union jobs. Finally, can somebody please make sure if oil companies have invested in proper cybersecurity?

When I was eighteen or something, me and several people my age reasonably thought that age would doom us into becoming more and more conservative, less and less radical. We’d be lucky if we were still MSNBC parents once we reached our middle-age. There’s nothing like a Crisis to give you perspective. The Climate Crisis demands radicalization, it demands Direct Action and it demands disruption. But in being a crisis that is both the cause and threat to the very structures of the industrialized world, you are forced to be way more insightful in your hearts and minds strategy.

On the other hand, there is a very simple algorithm that can answer whether a Direct Action will be worthy or not: Will this inconvenience regular folks or will it inconvenience the kind of people who always come on top? After answering this, come the tricky questions: How much? followed by How can it move the needle?

Or, simpler still, just let People of Color and the Global South lead the way while providing cover and numbers. As Abigail Thorne once said, Indigenous Peoples know damn well what it is to experience the collapse of a civilization.

This article was actually written by Chilean Carlos Alberto Délano Abbott. If you are a representative of big oil who would like to provide a statement, feel free to address your mails directly to him or at his e-mail [email protected]

← The Super-Sweet 'My Father's Dragon' Brings Cartoon Saloon to Netflix | 'Yellowstone' Doesn't Have a Monica Problem, It Has a Taylor Sheridan Problem →