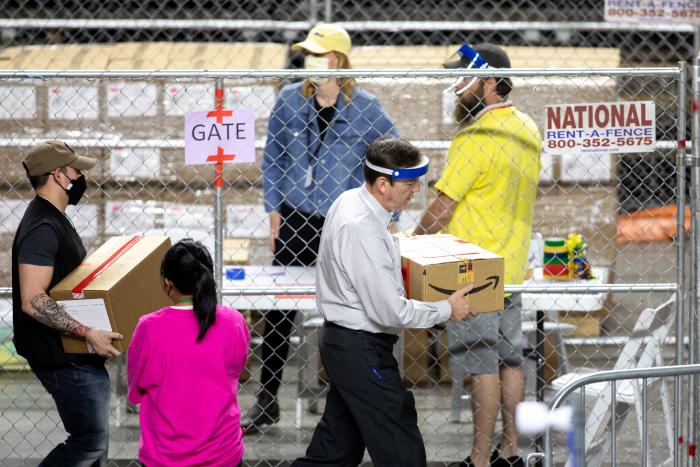 I Just Don't Know about Arizona

Before we get into it, let me just say that the state of Arizona has stunning scenery and some truly great people in it. Every state’s got its share of issues; for example, my state capital has a street system designed by MC Escher based on Colonial-era cow paths. And we’ve got crunchy granola Lefties so far around the curve they’ve reached the anti-vaxxer right-wing conspiracy theorists coming the other way. Now, all that said … What the actual Hell, Arizona?

Still reeling from the fact not everyone in their state loves a misogynistic, racist, senile old lech enough to vote for him a second time, Arizona Republicans are still recounting the 2.1 million Maricopa County ballots they think will prove Donald Trump got robbed of a second administration. They haven’t gotten very far — only 200,000 ballots have been counted so far. They’re supposed to be done by next Friday, May 14. Now I’m no mathematician, but five minutes and an abacus gets me to the conclusion they’ll have to check 188 ballots every minute for the next 7 days to finish in time. That’s without pee breaks. And you have to remember the median age of an Arizona Republican is 87, so pee breaks are frequent.

What are they searching for, you might ask? Great question! Ken Bennett, former Arizona Senate President and liaison between the Senate and the auditors told the Guardian, “They’re looking for folds in the paper. They’re looking for where the ovals are marked, is there a little bit of an indentation or was the mark made by a Xerox machine?” And according to election auditor John Brakey, they’re also checking for…. bamboo? “There’s accusations that 40,000 ballots were flown into Arizona and it was stuffed into the box and it came from the south-east part of the world, Asia, and what they’re doing is to find out whether there’s bamboo in the paper,” Brakey said. I … what? What?

There are so many levels to this. First, the idea that China needs to fly in 40,000 ballots like there aren’t printers in Arizona. I assume there are printers in AZ, anyway. It could be all sentient tumbleweeds for all I know. But I assume there’s a Staples closer than Beijing. Second, the idea you can see bamboo in the paper with your eyeballs. I’m also not a paper manufacturer, but I’m pretty sure all the cellulose fibers in paper are so smashed up you’d need to do a chemical test to determine its origin. And maybe I’m reading too much into an audit run by old white Republicans convinced there’s a Chinese conspiracy to ruin their lives when all China has to do is wait for global warming to do it for them, but something feels super racist about checking the ballots for Chinese bamboo. It’s the electoral equivalent of dog meat in the fried rice jokes.

Republicans are supposed to finish the audit by May 14 because then the auditorium is booked for graduation ceremonies for much of the summer. I like to picture recent graduates weaving around half-collapsed cardboard boxes while old folks in MAGA hats wiped their tears with crumbled ballots, but it seems unlikely. Still, we must hope for the best. Because if we can’t laugh at the collapse of democracy, what’s it really good for?

← Trevor Noah Addresses Twitter's Newest Feature | Reddit Asks the Question: 'Women of Reddit, What Was Your Worst Run in With a Creep?' →