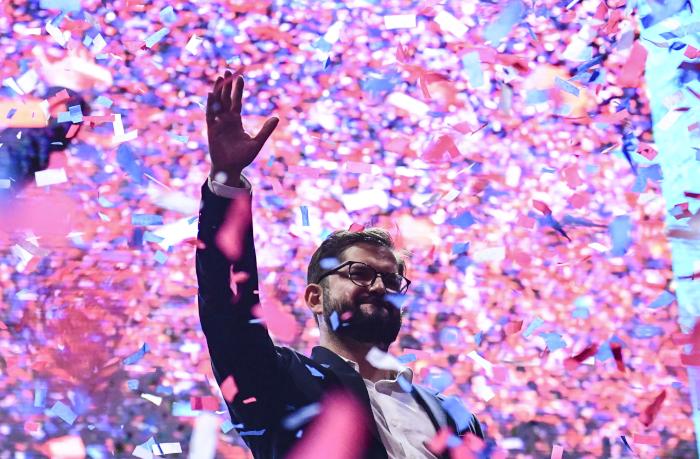 How to Win an Election (It's a Millennial Leftist President Y'All!)

(I tried to write this using Décimas, but then I realized that a) I know jack-all about writing Décimas and b) Décimas is an eminently Spanish-language style of poetry. So I just wrote this in free verse, like a coward).

Welcome to a country whose history of late
was written by a latter-day Aaron Sorkin
Not a man in the high of West Wings 1 through 4
but the one in the Chicago 7 and Newsroom
A script written by a progressive forcing himself
into the optimism that this is just the nadir of the arc.
Planting the soft slide to a satisfying season finale,
twists and cliffhangers released into a new balance
of this melodrama, the needle of justice moves
further left from the powerful and further close to the heroes.

The audience is rewarded for their attention,
and they feel as if they also have won.
A victory questionable as the awards and nominations
that come the showrunner’s way.
Because the spectators divorce themselves,
from the loose ends of this tight little bow.
That you have to play an ensemble character,
living a history that took a hard turn away
from the boredom of negative peace.
The worst part is knowing, there’s little you can script in.

This is Chile, Seasons 2019 to 2021
Character-driven plot by a neutral evil villain,
in the presidency a second time (f**k our lives).
The callous white elite kicks the dog one time too much.
The country erupts, releasing at once
the swallowed frustration of 30, 50, 200 or 500 years past.
Add another national trauma to the list, and imperfect victims
at the hands of military and police,
but just like in the past when pushed towards the abyss,
we turn away and vote a new Transition that lasts.

A New Constitution is the first answer
to disentangle this whole mess.
But Season 2020 rolls in, hits pause and exposes
the same hunger we protested a few months before.
The Season finale comes early in October,
a New Constitution by a landslide, one written by us.
One that will be written with gender parity,
one that will be cowritten by the First Peoples, at last.
Mid-season 2021, we choose delegates, diverse and progressive
and the right-wing does not have enough votes to block. Ha-ha!

But up next is all Republic’s bane,
we have to vote in a new King or Queen.
We got used to a head of government,
that is also head of state. The Presidency,
mandatory to help open up a path, if lucky,
if not, they can muddle us in repeating past.
The callous, white elite have their champion,
I don’t wanna name him but his name is Kast.
The establishment left and right dugtheir own wells,
and the left chose a Millennial named Gabriel Boric.

Just 35, the minimum age to run for the seat.
That most promising leader of the Student’s Marches,
that in Seasons 2011-2013 stirred in the tides
of a decade of demanding positive peace.
A politician his entire adult life. Congressman, metalhead, Swiftie, son of diaspora and privilege, proud son of the South of the South,
who has made a career of learning from his mistakes.
Investing his political capital to bring a New Constitution forth,
His turn to run for the presidency came ahead of time,
reluctantly answering history’s call.

November 2021, second to last chapter of the season.
The General Election rolls in with the first Presidential round.
And the results hit you in your hope and in your gut.
Results that are neither good nor bad, but its implications
are dreadful, if the worst comes to pass.
Tight margins in the Congress, tight margins in the Upper House.
The far-right’s champion comes in first, Boric comes in second,
third comes a grifter that in the country couldn’t show up.
Last comes the joy at the good news: the first transgender lawmaker”>First transgender congresswoman.
And a good person is rewarded, human rights activist Fabiola Campillai senator elect.

The far-right’s champion, the other guy, I don’t want to use his name.
The nice-guy fascist, Bolsonaro and the former guy without the grotesque.
Younger son of a Wehrmacht officer and NSDAP member.
A rat that ran to Chile playing a Red Cross worker,
in this self-hating country, his future paved for the blonde and blue eyed.
In less than a generation, his family climbed up to the elite,
ladening us with several versions of the same shit.
It helps if you snitch peasants to the dictatorship
rounding up and executing them for trying to unionize
and later your eldest helps the tyrant sell the State by the pound.

Can we pin the family’s sins on the son,
when back then he was just a child?
Clearly not, except he stands up for everything
they said and did, and has relentlessly defended
all the dictatorship’s psychos in chief.
The entirety of the establishment right kissed his ring,
as if he wasn’t just more of their own same.
He travels to the USA in the midst of it all
meets with Bannon’s flying monkeys, meets with Lil’ Marco,
so much like his liberal nephew and his flaccid moral backbone.

But more importantly, he travels to buy the endorsement
of the one that came in third, Mayor Quimby in the flesh.
Deadbeat dad, harassing professor, third-rate economist,
unable to return to Chile because of alimony unpaid,
claiming he was neither on the right nor the left.
Which means rightwinger, Chilean popular wisdom tells.
By virtue of not being any of the rest,
he won among the less informed but righteously pissed-off.
But his biggest con yet was convincing almost everyone
that he actually held the keys to his electorate.

Instead, against all odds, against no room for errors,
Against contradicting advice, in good faith and the other kind,
against a media that couldn’t be counted on.
Against the reasonable skepticism of the people that think
Gabriel Boric was much too young.
And most importantly, against less than a month of campaign,
there was only one thing to be made.
Go back into the streets, and talk the talk, share points of view,
turn off the phones, ring door after door,
bother people walking with a flyer and the good news.

So you anxiously jump into any way you can volunteer,
turns out there are tens of thousands more this time around,
in every district, in every region, every walk of life,
in every Democratic party or organization.
Unlike the other, always volunteers.
Because there is as much fear as there is hope,
there is a contrast so stark, so obvious,
We just had to look a few decades back,
the wound having never fully healed.
So why the fuck does this have to be a whole mountain to climb?

However, the street tells you a story in a randomized sample.
Here’s a thing you might not know: if in hindsight
defeat becomes obvious, victory is even more so.
Because in a bad day, running in and out of the subway
three out of 10 people take the propaganda flyer from your hands.
Eight out of ten if it’s a good day, two hear what you have to say.
Almost every single person under 35 tells you eagerly
that they want to vote for a guy that is so much like them.
Better still, is the middle-aged and older people,
mending 48 years-old broken heart.

Here’s how you win an election, my US friends.
There’s no substitute to the damned face to face.
Door to door, eight in ten won’t open or won’t be there.
You find lovely, two-car upper middle-class houses
whose owners are bigger Leftist radicals than you.
You find skeptics or dictatorship fans in social housing.
But then workers and maids in posh districts yelling Fuck Fascism!
And overall, you sample a trend, a trend of hope,
a trend of old and young that know what the other guy entails,
and interested in what the younger one (and you) have to say.

The campaign is still toxic. Fake news, fake trends, bad faith.
Far-righters showing their face and asses,
without any ability to mobilize.
In the midst, Equal Marriage is approved,
and it becomes clear it’s women who’ll lean the scale.
Last debate, Boric clears spurious addiction accusations,
traps the far right into disputing a certified medical test.
And on the last day of campaigning, amateur move by the writers,
the widow of Augusto Pinochet dies, callous, corrupt hag and his right hand.
Perhaps many were reminded of the scale of things at stake.

After days that were like weeks, Election Sunday is a whole month.
We are all convinced that this will be tight and tense
A candidate delegate at each polling booth, in every polling station.
Now, how do you quell participation
when every adult is automatically registered to vote?
If you are Chile’s government, well, fucking with public transportation, of course.
The citizenry takes it up in their own hands, they put their own cars,
they pick up voters at bus stops, running back and forth.
This is the citizenry that woke up in Season 2019.
Someone says, in a Tweet I can no longer find, this is an electoral Dunkirk.

In a good way.

Like our candidate, I have OCD, and also anxiety.
Every bit of non-great news I process bumping my blood pressure.
At every moment I feel like they’ll drop a “this can’t be won”.
The booth supervisors are young and easy going,
the opposition delegate, a kindly gentleman. Great crew.
My mom drops in at the polling station, she’s as nervous as I.
It’s closing time to count the booths’ votes, I shut off my phone.
I shut off the outside world and focus on the count.
For half an hour, there are two timelines in the country outside that room.
And they will collapse if I check results in my phone.

During the count, my mum walks in the room to check in.
Always expecting the worse, I read her body language as:
“There’s nothing to be done, let’s just go home”
But it was just the results of that booth,
where the other guy comfortably won.
I hear applause outside, muffled yelps.
but also a steady count of “Gabriel Borics” in other booths.
I prance around the room avoiding my phone.
My supervisor walks in to check the results.
Her face is calm, no sign of reddened, teary eyes.

Little later I hear celebrations, and I just know it’s us
because there is actual joy, actual relief,
because they sound youthful, because they sound truly… gay!
Because there is no pettiness in those noises.
Just a project moving onwards (¡Seguimos!).
I check the phone, with 33% of the votes in,
Boric leads with 55%.
The youngest president in our history.
Chilean Millennials making power ours.
My mother walks in, hugs me and says:
“Finally the dictatorship is over”.
Clean Victory. Perfect Season Finale.

You can copy-paste lessons
From one country to the next
But still, we learned how to tackle
the idle slide into fascism:
First, you have to leave your desk,
dissolve your soils and talk face to face.
Second, and this is no whiteknighting, fake-ally shit,
women must take the lead, proven by every poll.
Third, in only four weeks, we moved 15% more votes.
You have a whole year to save 2022.

So now, the problems begin, so much work to be done.
That’s Ok, because finally we can make them our problems too. So can you.

Alberto Cox lives in Santiago and swallowed a lot of pettiness during the campaign, so follow him at @ThisAlbertoCox so he can be more influential than local Centrist wimps.