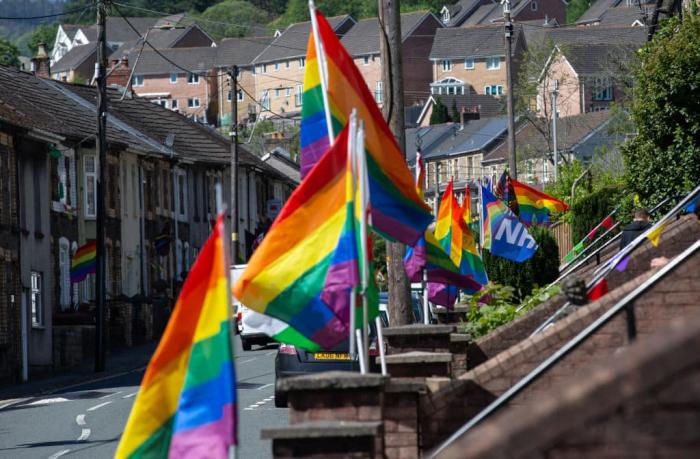 How the Pride Flag Became Hijacked By the NHS

Last week on The Great British Bake Off, the contestants were set a technical challenge of cooking rainbow bagels. It was a fun segment full of Instagram-ready (and not-so-ready) bagels that proved more difficult than anticipated for most of the bakers. When explaining why he chose this particular dish for the bakers to prepare, judge Paul Hollywood said that he thought they were a great symbol for the NHS. Over the past few months in the UK, as the coronavirus continues to wreak havoc across the nation, the rainbow has become a symbol of hope and support for our national health service. It’s now commonplace to pass by people’s houses or local businesses and see rainbow flags or bunting lining their windows with signs thanking the NHS for all their work during this difficult time. You can even go on Amazon and buy NHS rainbow flags just for the occasion.

Of course, it’s not an NHS flag. It’s an LGBTQ+ Pride flag.

The original Pride flag is one of the most recognizable symbols of the past 50 years. The six stripes, representing the basic colors of a rainbow, are iconic and can be found the world over as a symbol of LGBTQ+ liberation, identity, and activism. So, as you can imagine, for LGBTQ+ people in Britain, it’s been very odd to see rainbows everywhere and know that it’s been hijacked to mean something totally different. You can’t help but feel somewhat deflated every time you see a local business dressed to the nines in Pride symbols for the NHS when they never did such things for Pride month.

The Pride flag has its origins in the work of Gilbert Baker, a gay activist who had been challenged by none other than Harvey Milk himself to create a symbol for the community. His original gay pride flag, which flew at the San Francisco Gay Freedom Day Parade celebration in 1978, featured eight colors, including a hot pink and turquoise stripe. As the flag became more commonplace and demand increased, the flag went down to six stripes, partly due to fabric availability. Over the decades, the flag was adopted worldwide as one of the defining symbols of LGBTQ+ life. While other flags have been created and used to represent the full diversity of the community along lines of race, gender, sexuality, and kink, the six-stripe rainbow flag is a default mode of sorts. It’s an all-encompassing symbol of what it means to be part of this historic and oft-marginalized community, a sign of a safe space or solidarity among friends and allies.

Britain entered a state of lockdown due to COVID-19 around mid-March. Schools were closed, kids were stuck at home, and the streets were empty. We could leave the house for one hour a day for exercise, but that was about it. Clearly, we needed a pick-me-up. Kezia Roberts, a mum from Leeds, noted how a group of mothers in Bari, Italy, had started a campaign with their kids to fill the neighborhood windows with bright and colorful drawings. Children painted unicorns, smiley faces, and rainbows, accompanied with the slogan, ‘Andrà tutto bene’ — Everything will be alright. Roberts then started her own campaign called ‘Chase the Rainbow’, similar to art walks she had organized in her hometown. The idea was to fill windows, walls, and fences with colorful rainbows to cheer up everyone walking through the deserted streets. It quickly spread and became adopted as one of the many forms of celebration for the NHS, which dealt with thousands of patients round the clock. The NHS embraced the symbology and, along with random acts of clapping and the occasional hashtag, it became an easy and politically convenient way for people to demonstrate their support for the service without really doing much else.

Rainbows are not always a Pride symbol. Over the centuries, rainbows have signified a slew of ideas, mythologies, and political notions. It’s not hard to see why lots of children painting bright and happy rainbows as a sign of positivity and support for an oft-attacked institution would be so quickly accepted by the general public. The problem here is that it’s not just rainbows that have become part of the NHS symbology: It’s the Pride flag itself. Those six stripes in that order mean something totally different from a drawing of a rainbow, and seeing that used in this manner can’t help but leave a churning feeling in one’s gut.

It’s truly astounding how quickly the Pride flag has come to symbolize the NHS over the past seven months. It feels like yet another example of how the LGBTQ+ community has seen its ideas and creations appropriated by the cishet majority. The radical nature of queer liberation has been diluted into nothingness, not just for this community but for the NHS itself. We now get the same politicians who want to sell off our health service drenching themselves in rainbows. They use the symbol to show off their clout, all while insisting that now is not the time to discuss public sector pay rises for those who have risked their lives over the Summer because of this pandemic.

A lot of LGBTQ+ people feel like they can’t complain about this conundrum because to do so would be seen as attacking the NHS. That is how fully the Pride flag has been appropriated. The Pride flag was created to give the community a symbol at a time when expressing one’s identity aloud could result in serious harm (an issue that has sadly not gone away over the decades.) It was a means to show a bigoted world that they couldn’t ignore this fight for liberation. The flag flew high when the AIDS epidemic killed millions of LGBTQ+ people, a plague that the conservatives in power chose to ignore. Seeing that flag adorning the homes of Tories, the same party who supported Section 28, has a far more insidious effect now.

The coronavirus may not discriminate, but people certainly do. LGBTQ+ healthcare discrimination is a very real problem. Trans people, in particular, are denied the care they sorely need, an issue that has become more prominent as transphobes across the British media and political spectrum using trans and non-binary kids as their latest battering ram. LGBTQ+ people of color are particularly at risk. Queer people are assaulted on public transport for kissing their partners. So yeah, it matters when their symbol of pride, solidarity, and safety is turned into a cheap political decoration that’s not even an effective one for its appropriated cause.