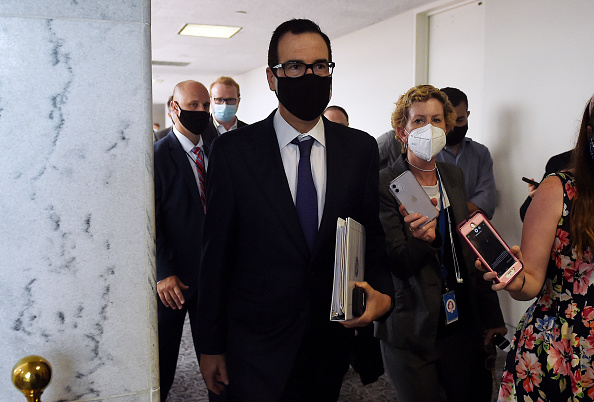 How the Next Coronavirus Stimulus Plan is Shaping Up

If another stimulus bill is not passed by next Friday, sh*t is gonna get very real in America. That’s when the $600 per week pandemic benefits expire, and for 18 million unemployed folks, that $600 a week has not only kept them afloat during the pandemic, it has kept the economy going. Those benefits are all the more important because, as we learned today, unemployment claims are rising again for the first time since the beginning of the pandemic. Moreover, the eviction moratorium is also set to end next week, and if the federal government doesn’t do something, a lot of people are going to lose their homes, and they won’t have enough money for find a new place. In other words, if the Congress doesn’t step in and do something, it’s gonna start looking very 1929 around here, especially because a lot of those small businesses who relied on the paycheck program to keep their employees employed will start having to lay those people off, as well, as states where the virus is raging may have to shut down again.

Something will surface, because Trump doesn’t want to go into a November election with 25 percent unemployment and millions more people out of their homes in the middle of an already raging pandemic. The House Democrats have already proposed a $3 trillion bill, and the Senate Republicans are converging around a $1 trillion stimulus package. This sh*t matters in a very real way to millions of Americans, including a lot of readers here. This is what my wife and I — both of whom are trying to keep small businesses afloat — talk about at the dinner table. It’s very sexy. Here is how it is shaping up:

Say goodbye to the extra $600 a week. However, it’s not as bad as it looked last night, when Republicans were talking about replacing that $600 a week in pandemic benefits with $400 a month. Now, Treasury Secretary Steven Mnuchin is proposing that employees receive 70 percent of their employment income, which he believes is enough to keep folks afloat but not so much that it prevents people from returning to available jobs. It is unclear, however, if the states’ unemployment systems will be able to make those calculations, and Democrats aren’t keen on it. Other proposals included simply reducing the $600 a week to $200-$400 a week. The expectation is that these benefits will be extended until December 31st. I suspect there will be a compromise closer to the 70 percent of lost wages/$400 a week.

We also now know that a payroll tax deduction proposed by Trump will not be a part of a new plan, which is good, because that is dumb, and doesn’t help any of the 18 million people who are not on payrolls.

Meanwhile, there is also talk of providing another round of PPP loans to small businesses who have lost 50 percent or more of their revenue because of the coronavirus. I think doing another round of PPP loans would be huge, because it allows employers to keep their employees on the payroll, which keeps that unemployment rate down, which Trump will want ahead of the election (although, the 11 percent unemployment rate is unlikely to dip below 10 percent before November).

Meanwhile, $105 billion will go to schools to help them reopen, although Republicans want to make that reliant upon them reopening in person (this will almost certainly be a no-go, since several of the country’s largest school districts have already decided against reopening in the fall). $16 billion will go to more coronavirus testing; tax credits will be given to companies to encourage them to hire employees; and there could be another round of stimulus checks going out to individuals, although the amount has not been specified. It looks like it could be another $1200 for each individual making less than $75,000 a year.

The biggest difference between the Democratic plan and the Republican plan, at the moment, seems to be the $1 trillion that the Democrats proposed sending to state and local governments to make up for steep losses in revenue. The Republicans have not included that in their plan. I am guessing that Democrats will ultimately insist on some aid to local and state governments. I don’t know how the compromise between the two chambers will ultimately work out, but I am confident that Donald Trump will want to provide as much stimulus as possible ahead of the November reelection efforts, despite the objections of folks like Rand Paul. I expect that we will continue to live in a pseudo socialist state until 2021, and I ain’t mad at it, although someone should maybe think about giving health insurance benefits to the millions of laid-off workers who have lost their benefits. An easy way to do this would be … Medicare for All!