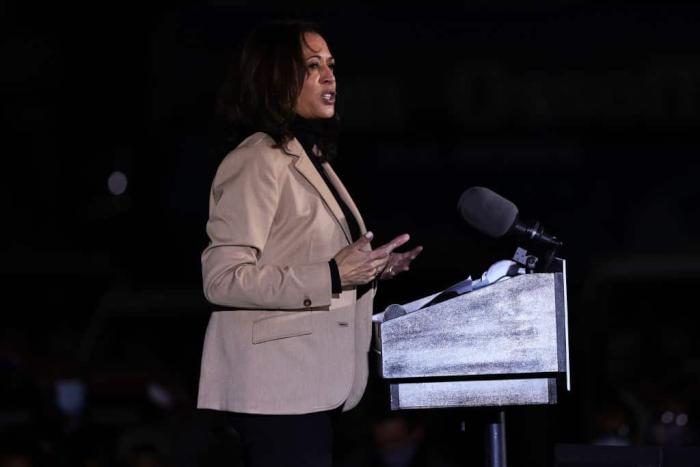 How Did Vogue Screw Up So Much With their Kamala Harris Cover?

Vice-President-elect Kamala Harris is the cover star of the February issue of American Vogue. The magazine, which has been edited by the infamous Anna Wintour since 1988, has leaned Democrat for many years, although they have profiled Republicans like Sarah Palin. They endorsed Hillary Clinton for the Presidency in 2016 and featured former First Lady Michelle Obama on the cover several times. The decision to focus on Harris is a moment of immense historical importance and an example of the diversity that the magazine has been criticized frequently for overlooking. The cover itself, however, has been widely derided as a sloppy mess.

The photo on the left is what Vogue agreed to publish as their February cover with @KamalaHarris’ team.

Without her knowledge, Anna Wintour switched it out for the photo on the right.

The cover shows Harris in casual mode, wearing Chuck Taylor sneakers, against a pink and green silk backdrop, the colors of which represent Harris’ college sorority, Alpha Kappa Alpha. She looks oddly uncomfortable and her skin ashen from bad lighting. The composition seems rushed and lazy, and it’s clearly a missed opportunity from the magazine. Harris’s own team was reportedly ‘blindsided’ by the cover as they had agreed with Vogue on a different image, one of Harris in a powder blue suit looking more professional and presidential. That cover was revealed as a digital exclusive, while the maligned one will be what customers pay for on the newsstands.

In a statement, Vogue defended the choice by saying that the more informal image of Harris captured her ‘authentic, approachable nature, which we feel is one of the hallmarks of the Biden-Harris administration.’ They released both images, however, to ‘respond to the seriousness of this moment in history, and the role she has to play leading our country forward.’

This controversy is, sadly, nothing new for Vogue. Wintour’s tenure as arguably the most powerful and notorious woman in fashion publishing has been heavily criticized for its lack of diversity, overreliance on celebrity covers, and creatively unimaginative editorials. It took until 2018 for the magazine to hire an African American photographer to shoot the cover image, and that’s only because Beyonce had editorial control over it. Last July, Vogue was called out for its Simone Biles cover, shot by regular favorite Annie Leibovitz, for how washed out and badly lit the gymnast looked. Vogue is not the only fashion magazine to be criticized for its inability to light Black skin — see 95% of Hollywood movies too — but surely the grand dame of the business should be held to a higher standard?

With the Harris cover, the issues are plentiful. Clearly, Vogue faced a few conundrums when it came to profiling the first woman Vice President in American history, as well as the first woman of color. This is a moment of celebration but one that requires a specific balance. This isn’t the same as, say, profiling a First Lady, a job that, while obviously important, is primarily defined by its glamor. Michelle Obama’s Vogue covers, for instance, focused on her style and grace. This is familiar ground for a fashion magazine, obviously.

They’ve struggled more when it comes to showing professional women in this context without devaluing their work or forcing them into a more polished mold. When Hillary Clinton was on the cover during her time as First Lady, Vogue went back to glamor, something that Clinton herself frequently rejected. Condoleezza Rice was photographed in a full formal gown by a grand piano, while Samantha Power wore a little black dress to read to her kids. Debbie Wasserman Schultz’s familiar curly hair was coiffed into something more editorial-friendly, to the point where she was deemed unrecognizable. The other option is to go professional. When in doubt, show the women at work, whether it’s Elizabeth Warren at her desk, Susan Rice in the UN, or Nancy Pelosi in a power stance looking out onto the skyline of DC. It’s not impossible to pull off both. Recently, Vanity Fair did it with their Alexandria Ocasio-Cortez cover, dressing her in a familiar white suit with her token red lipstick as she posed against a gorgeous and highly millennial-friendly floral background.

Harris is not a fashion icon. She’s never tried to be and it’s kind of a miracle that her campaigning, both as a Presidential candidate and as Joe Biden’s VP, wasn’t obsessively covered in terms of her clothes, especially when you consider the scrutiny that Hillary Clinton’s pantsuits faced. She’s no-nonsense, a smart-casual woman whose clothes demand zero attention because she prizes utility over aesthetic. Dressing her up in couture or making her lounge at a desk in four-inch heels would have been a terrible choice, a false image of Harris to send to the world and a bad representation of her as both a person and leader. So, by the looks of it, they went in the totally opposite direction, making her cover seem as though it was thrown together in six minutes and Harris was dragged off the street by a harried intern.

Vogue doesn’t know what to do when traditional notions of feminine glamor are off the table, and they certainly have no idea how to photograph women of color in a manner that doesn’t make them look either grey or shadowy. It’s made all the more baffling by the fact that the alternate cover, the one that Harris’s team thought would be the final choice, seems to thread that fine-needle pretty solidly. Harris looks polished and professional but not falsely so. The contrast between the light blue suit and the golden backdrop is striking but not overpowering. We get the sense that this is Kamala Harris. Wintour’s been off her game for years now, and this is but one example of why so many people want her to step down from Vogue. You could never imagine the British editor Edward Enninful doing this.

Vogue clearly wanted to make a statement with the Harris cover, conveying not only history in the making but the magazine’s own political force (and, conveniently, another way to shove it to Donald Trump, who’s been complaining about the lack of magazine covers given to Melania over the past four years.) Placing any woman politician into that fashion context, however, opens up more doors than Vogue seem ready to enter. Women’s power can and should be portrayed in ways that aren’t exclusively reliant on soft femininity but still have room for it, otherwise, we exacerbate the toxic notion that womanhood in any form is ‘inferior’ to masculinity and rejecting it is the only way one can succeed in life. For the magazine, it reinforced that they are utterly clueless when it comes to understanding women who aren’t skinny, white, and unsmiling in couture. Vogue seriously blew away their shot here, and perhaps the industry can learn the right lessons from it. I doubt Wintour will, sadly.

EDIT: The original Vogue shoot of Vice-President-Elect Harris was photographed by Tyler Mitchell, a Black photographer. It was my error in not including and contextualizing this detail, and for that, I apologize.

← Bill Burr Is Now The Only Life Coach Worth Listening To | Stream It or Nah: 'Lupin' is a Smart, Captivating Series →