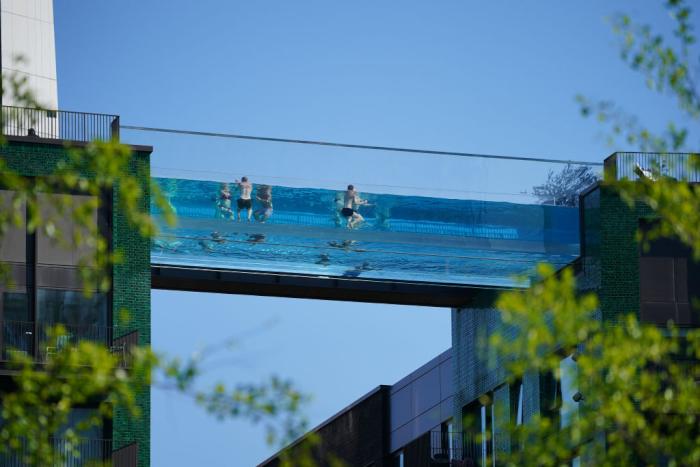 Give Me the Most Obvious 'F**k the Poor' Metaphor You Have. No, That's Too Obvious

According to a recent report, more than one in five Londoners in working households live in working poverty—the term used for someone who has a regular source of income, but who nevertheless stays in poverty because of low pay.

The proportion of people who live in working poverty in London is the highest in the UK, and the figure has only increased in the last two decades.

The foundation for these problems is the same all across the country: A cross-party political class of neoliberal ideologues committed to corporate deregulation and viciously opposed to the state’s duty of care for its citizens. Corporate profits have been allowed to soar while their contribution to society has remained minimal, worker exploitation runs rampant, the welfare state has been gutted. You know the tune. While these issues pervade the entirety of the UK, it is London that often feels the symptoms of late-stage capitalist malaise most dramatically. The ever-widening divide between the very few haves and the many have nots is frequently starkest in this city of contrasts. This is particularly true when it comes to one of the most politically emblematic topics of all: Housing.

Describing the incompatibility of social housing with the dominant ideology of the UK for the past four decades, Anna Winton writes in her analysis of London’s housing crisis, ‘Big Capital’:

In other parts of Europe, […] public housing schemes have worked well and continue to function as their architects intended. But in Briatin, large-scale housing projects, built according to modernist and socialist principles, collided directly with the individualistic and neoliberal political and economic culture that became embedded from the 1980s. Aspects of New Labour policy attempted a ‘third way’, putting housing associations in charge in place of councils, but failed to turn the tide, and indeed critics claim that instead it significantly ramped up the privatisation agenda. Today, the result is the determination, openly admitted by many in government, to get rid of social housing altogether, for all but a tiny minority.

London, like other majorly financialised cities like New York, has borne the brunt of the neoliberal commodification of housing. Transformed by market fanatics from a public good into an insanely profitable yet valueless investment opportunity, housing is one of the most profoundly damaging fronts of capital’s war on ordinary people. For years now, London has faced one of the worst housing crises of modern times. A desperate shortage of new afforable houses and flats has been compounded by tens and maybe hundreds of thousands of affordable homes being demolished in order to make way for luxury developments designed to be purchased by faceless representatives of transnational capital. Housing has become an asset game for the ultra-rich. London’s property market has become a safe deposit box for the ultra high net worth individuals and corporations seeking the shelter of London’s forgiving tax environment.

While housing prices have shot up, wages have remained stagnant. In the mid-nineties, the average home in London cost 2.6 times the median salary. By the mid-2010s, it cost 10 times as much. In some of the posher boroughs, it was 30 times as much. Enabled by successive governments and corrupt councils of both political stripes, London is home to some of the most exclusive and expensive properties in the world. Often, these sit almost permanently unoccupied. Alongside these yawning spectres of capitalism run amok you find people living in some of the worst conditions in the country: Cramped, over-crowded, and run down to the point of being a health hazard. Sometimes, tragically, even more than a health hazard. And that’s when the people have a roof over their heads at all: In 2019/20 there were a reported 10 thousand people sleeping rough in the capital.

London’s housing crisis has also further exposed the racial fault lines along which capitalism operates. As affordable housing has disappeared in the face of the ‘redevelopment’ of poorer areas, entire communities have been destroyed and displaced. These communities are disproportionately made up of immigrants and people of colour, who are already exploited and made vulnerable by a society structured along instutionally racist lines. The term ‘redevelopment’ can be better understood as a barely veiled euphemism for social cleansing.

This crisis sits alongside the corporatification of public space that cities like London are increasingly subject to. As journalist Jack Shenker writes in The Guardian:

Pseudo-public spaces - large squares, parks and thoroughfares that appear to be public but are actually owned and controlled by developers and their private backers - are on the rise in London and many other British cities, as local authorities argue they cannot afford to create or maintain such spaces themselves.

Although they are seemingly accessible to members of the public and have the look and feel of public land, these sites - also known as privately owned public spaces or “Pops” - are not subject to ordinary local authority bylaws but rather governed by restrictions drawn up the landowner and usually enforced by private security companies.

It is within this context that the following abomination should be understood:

Swimmers enjoy warm weather in London at the Sky Pool which is believed to be the world’s first transparent pool built between two skyscrapers
https://t.co/mtRX8qvt0a pic.twitter.com/2skTGK9Jp7

That’s the Sky Pool at London’s Embassy Gardens in Nine Elms, a luxury ‘regeneration’ project that has been imposed on an area covering parts of the boroughs of Lambeth and Wandsworth. Launched by Boris Johnson in 2012 while he was Mayor of London, Nine Elms is representative of everything that is wrong with neoliberal housing. As Oliver Wainwright writes in The Guardian:

With around 5,000 homes completed over the past five years, and a further 15,000 in the pipeline, it is now possible to get a sense of what kind of place is being created here, what effect the planning policies of the past decade will have in reality. The results so far are not encouraging. Roughly the size of Monaco, the new district has all the makings of a similarly exclusive fiefdom, an international investors’ playground where regular Londoners are pushed to the very edges, or cut out of the picture altogether.

The capital is well used to high-rise, high-end totems by now, but VNEB [Vauxhall Nine Elms Battersea] takes the iniquities of the real estate-industrial complex to extremes. It is a place where penthouses with private chapels and running tracks loom above crumbling council estates across the railway line, where scores of flats lie empty, held by secretive shell companies in off-shore tax havens, and where the division between absentee investors and owner-occupiers confined to poor doors could not be more stark. Dogged by allegations of cronyism and gerrymandering, it is the product of politicians in thrall to property developers, driven by a blind faith in the market - even when investors started to realise that they might have bought into a mirage.

It’s always nice when the villains of this world provide such an obvious visual metaphor for the rest of us to ponder. And so great for mighty journalistic institutions like the BBC to frame the issue in such responsible, relevant ways as ‘people enjoy sun’. Twitter, of course, had thoughts on the sight:

2 million Londoners live in substandard housing with leaks, mould, pests and a host of build quality and fire safety issues putting their health and lives at risk. https://t.co/PMrXXK5RZT

This is 5 minutes away from the estate I grew up on in Battersea where the council abandons social housing tenants with damp, silverfish and no central heating in their flats for months but rubber stamps luxury developments like this on our doorstep https://t.co/ZyYCtRWAZR

There’s a mistake in this report.

So to confirm: Ballymore built an all-glass swimming pool suspended 115 foot in the sky, but said the reason it took four years to even begin removing Grenfell-style cladding from New Providence Wharf is because the work is "extremely complicated". https://t.co/vRBxt9tltD

This is in my ward…in which more than half of children officially live in poverty. Just saying. https://t.co/RQGVwBu9mt

Proper last days of Rome vibes, this. People trapped in squalorous mouldy homes with leaky windows and draughty doors are mere dozens of yards from this bacchanalia.

Taught state-led gentrification and regeneration using the Heygate this year for A Level geography, using work of @LorettaCLees and others. Very nearly opted for Nine Elms though #geographyteacher https://t.co/5r6JeKNFg3

This former industrial area in the heart of London was an incredible opportunity for a city facing a sever housing crisis. Yet from its inception, Conservative politicians have prioritised the private gain of developers over the public good.

But surely the new Northern Line is a good thing? Of course, but rather than using Community Infrastructure Levy, or God forbid some govt funding, the Council used Section 106 (a kind of local tax on developers) to fund it.

That’s why what’s happened here is so upsetting. We’re never again going to have all this abandoned industrial space which could’ve transformed the lives of people in a borough where thousands are statutorily homeless or spending half their income on private rent.

For more info you can read @ollywainwright piece on Nine Elms here, which includes the voices of residents we’ve worked with. https://t.co/t9sL2lxWso