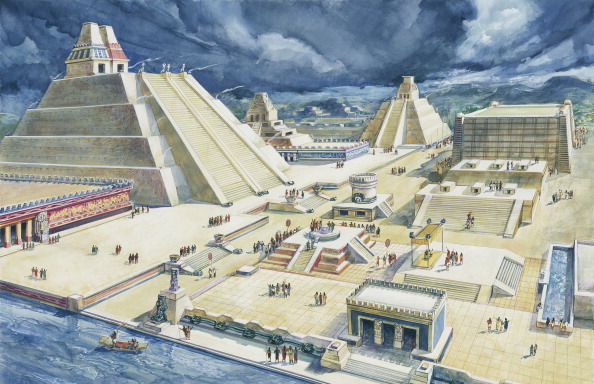 From Mexico and the Americas To Spain's Far Right: 'You Don't Get to Talk About the Aztecs'

(I wanted to write this article as a 1,000-word piece where 33.33% of the words were “f—k” and the remaining 66.66% were “go” and “yourselves,” and the Pajiba overlords said in principle they had no problem, but it would better if I gave some sort of background … it’s because of the SEO and stuff)

So, has it ever happened to you in the hellström that is the internet that you run into something so heinous, so wrong and so infuriating that your first reaction is … a measured response? But then, after a few days, a kind of reverse esprit de l’escalier hits you and you want to choose violence?

That happened two weeks ago, when vox, Spain’s far-right party, decided to commemorate a very particular anniversary. If you didn’t know, vox (and I’m using lower case on purpose) was founded in 2013 during that decade of European shitstorms and has grown ever since, mostly by eating the mainstream rightwing party, the Partido Popular. Saying someone is far-right in Spain means far-right, because the PP, as of now, has already turned into a much more reactionary party than most of their European counterparts.

As heirs of Francisco Franco, this party compounds their brand of hyper-Catholic, xenophobic, sexist, LGTBQI+-phobic and small-minded rhetoric with a love for neo-liberalism while opposing “globalism” and multinationals, unlike most far-right parties in Europe … basically, they are the GOP/the-former-guyism but Catholic and in Spanish. And pro-monarchy.

That’s the cherry on top of their dry and acrid tres leches cake of awful. They are Spanish supremacists, in that they virulently oppose the autonomy and cultural freedom of the non-Spanish-speaking regions of the peninsula, mostly the Basque Country and Catalonia. As you might imagine, they are also very proud of Spanish imperialism and are probably still wondering why we Latines sought independence.

August 13 saw the 500th anniversary of the Fall of Tenochtitlán and the collapse of the Aztec Empire, quick-starting Spanish colonization in earnest and everything terrible that came with it. These assholes decided to commemorate it in full troll mode: 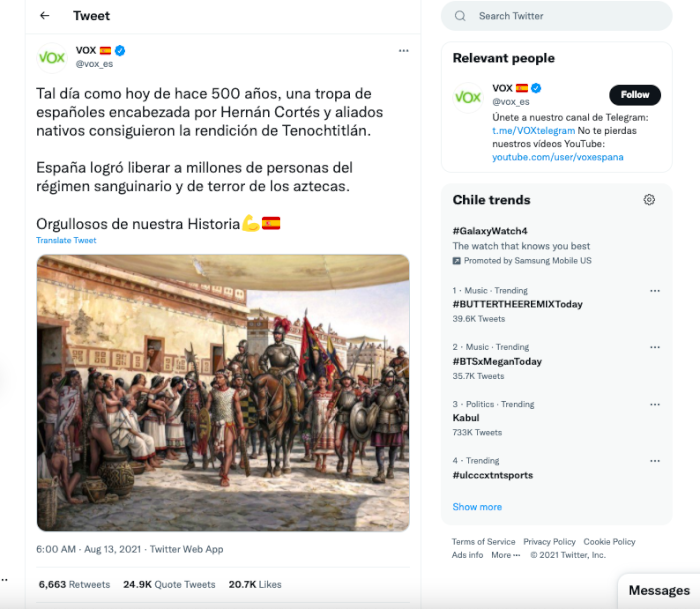 Translation: “On a day like this, 500 years ago, a troop of Spaniards led by Hernán Cortés and native allies succeeded in surrendering Tenochtitlán. Spain managed to free millions of people from the Aztec’s reign of blood and terror. Proud of our history”.

AHEM.
In Chilean Spanish: VÁYANSE A LA CONCHA DE SU MADRE FACHOS RECULIAOS.
This is what they believe, and it’s also trolling. As of publishing this, it’s still up on Twitter.
Do I need to explain how wrong they are? Do I need to mention that the complexity and richness of the Aztecs cannot be subsumed to their human sacrifices? Do I need to explain what happened to those millions of freed people soon after? Do I need to explain the unique human catastrophe that was Spain’s colonization of the Americas and how its toxic legacy still endures, and not just the racism and systemic discrimination of indigenous people?

Of course, I don’t need to. Because when people are this willfully wrong, it’s not ignorance, it’s just evil.
Surely, the Aztec Empire was brutal. I agree. I mean, what kind of people would publicly execute thousands in the name of their god … aaaaand you know what is coming here. Roll it:

Our answer, as Latines but from Mexicans in particular, was on fuego. Because here’s the thing, the Spanish might have brought/imposed their language, but we made it better, richer, wittier:

Translation: “In a country as politically divided as Mexico, we are thankful that a group of dumbasses like you has managed to unite us around this most Mexican of idioms: F**k your m**her”.

As for me, that measured response I had was that a) Spain would’ve been nothing, NOTHING without the riches you plundered (and then squandered, in true Spanish tradition); b) also, proud of your history? Why, you mean the one written by the Arabs?; and c) so how did you do against the Mapuche, supposedly less developed than the mighty Incas and Aztecas? Oh, right, they kicked your ass so hard they stopped halfway through Chile for the next 350 years.

Fighting against fascist Spaniards is like discussing with your 95-year old, decrepit, vile, and racist grandpa. Because they are not fighting the present. See, each far-right is stuck in their own personal past war: In Latin America, it’s the Cold War; in the USA, it’s the Civil War; in France, Algeria; and in Spain… it’s the Reconquista. Not this one, this one.

Luckily, there is another Spain, the exact opposite of all this. The problem is that they are also a mess, but at least they are not in the business of freezing the hearts of the future Spaniards.

← Was This the Best Music Year of All Time? | When Being A Prig Goes Right: Why Are We Still Listening To Kanye? → 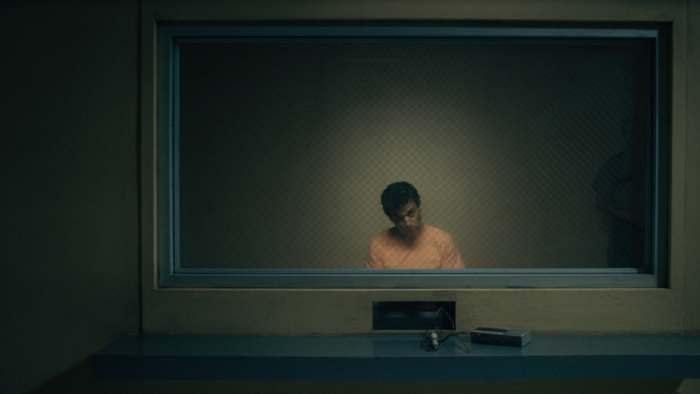