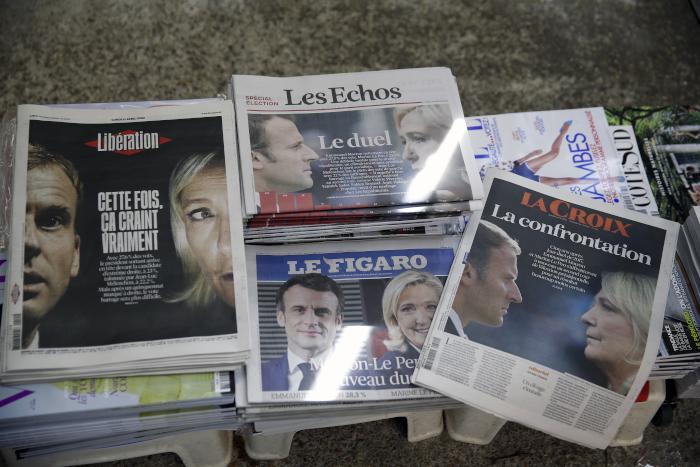 France Is Facing An Election Where The Far-Right Could Win. Again

Not this f***** thing again.
The surname Le Pen finds itself on the second round of the French Presidential Election for the third time.
The first time had Jean-Marie Le Pen facing against Jacques Chirac, the senior figure of French neoliberalism and the inspiration for one of the greatest villains in one of the best volumes of Asterix, and by extension, in comic-book history. But it was Le Pen Sr. who best embodied comic-book villain tropes as the figurehead for French fascism, Holocaust-denial, racism, and being standard-bearer of historical revisionism over France’s true surrender monkeys, the Vichy government. Plus, he looks and speaks like a caveman, but that would be a disservice to cavemen.

That election had seen record abstentions by French standards. Voting in France was mandatory back then, but not enforced de facto, leading to a whopping … 28% of abstentions? That’s adorable. Well, that, along with the fragmentation of left-wing parties and a slight uptick in Le Pen’s voters led France, in an election that saw left-leaning candidates obtain at least 40% of first-round votes, to a second-round where an elite right-winger went against a monstrous fascist. The second round saw an uptick in participation and every one from the right-wing to the Communists held their noses and gave Chirac 82% of the vote.

The second time happened only five years ago, held just a few months after the shock of the former guy’s election as POTUS. The traditional Left had completely collapsed after Francois Hollande’s disastrous presidency, mostly unable to present a sellable narrative after two of the worst terrorist attacks in European history. Meanwhile, Jean-Marie Le Pen’s daughter, Marine, had taken over her father’s party, ousted him, and started toning down the entire rhetoric of the Front National, now renamed as the slightly less militaristic Rassemblement National (National Rally). She kept the anti-immigrant rhetoric, the culture war centered on the use of headscarves in public spaces and against Islam in general, but she did away with nazi-farts, including kicking her own father out of the party. She started embracing more liberal views, such as supporting civil unions for LGTBI+ couples, supporting abortion, and withdrawing the RN’s support for the death penalty. At the same time, she did away with the party’s hard Euroscepticism and proposals for leaving the EU (the UK had already taken that stupid bullet). In a way, she has been turning her father’s party into something more like what the GOP wanted to be right after the 2012 election and before the former guy came around. It worked for her, increasing the share of votes of her father’s party above what the old guy could’ve ever imagined: From a low of 10.4% in 2007 to 17.9% in 2012, her first time around, increasing steadily into the low 20s between 2017 and this Sunday, both times going into the second round.

But the other way Marine has managed to make herself more appealing is by endorsing state-sponsored welfare and economic protectionism, but from a nationalist, “France-first” approach. She isn’t even a climate change denier. Within Continental European politics, there isn’t a contradiction between the far-right and economic redistribution, so it actually makes perfect sense: You make your country stronger by providing a strong social security network and rights, foreigners need not apply unless we need someone to pick up fruits and vegetables. It’s only white US people who went for the stupidest deal: Far-right with no welfare, even exclusively for white poors just in case a Black person manages to benefit. Other than this, she is a very charismatic, “blonde-nice” woman, always outperforming her father’s party in local and legislative elections.

On the other side, we have liberalism’s ultimate f—kboy, Emmanuel Macron. What can we say about Emmanuel Macron that actually helps us understand him? Or is he confusing only when looking at him from the perspective of politics in Continental Europe and South America? Because if you place him within US politics, he makes a whole lot of sense: A liberal figurehead until actually having to deal with the original sin of colonialism. Economic policies that are not directly trying to destroy the welfare state, but hedge-fund it as much as you can. A technocratic, elitist inability to understand the problems of at least 80% of the population. Attempting a balancing act that always starts from the framework of neoliberalism, always considering the Centrist compromise as something the Left is supposed to do. But his centrism is enough for English-speaking media to consider him the remedy against populism on both sides, never considering that right-wing populism has a more nefarious starting point. But it doesn’t matter much when he is the only alternative against the other nutjobs. Plus he’s so charismatic, youthful, and handsome (though a 7.5 for French male standards).

Macron is just so American. But here’s the thing, Liberals in Continental Europe are much closer to the center-left than to the center-right. Le Pen’s success and the success of Macron and his brand-new party meant that French politics has been uprooted to a much more United States-like political spectrum, which is a brutal irony and very bad news, even if you’re as Centrist as Macron.

When someone who is still as dangerous and toxic as Marine Le Pen becomes normalized, people on the fringes of the extreme can also enter the fray, even in a country that has laws against hate speech and denialism. Enter far-right pundit Éric Zemmour, who is basically a French Jordan Peterson with a sprinkle of Ben Shapiro, and the likely inspiration for Jeryd Mencken from Succession. He actually believes in great replacement theory. Interestingly, if Le Pen’s support came from more working-class backgrounds, Zemmour’s came from the perennial layer of reactionary middle-class in France. Basically, people who think the French Revolution was a net-negative, that feminism is a threat and so are Queer people. And of course migrants. He was chewing away at Le Pen’s popularity, until the Ukrainian War blew up in his face: he remained steadfast in his support for Putin, while Le Pen pivoted to denouncing the invasion and supporting the arrival of refugees. After all, they are white. Zemmour’s support plummeted and came up in a distant fourth place, with 7% of the vote, which is too much by 6.99%.

The war wasn’t a boon for Macron either. Not only did it keep him from campaigning, but in his attempts to be a master diplomat for the 21st Century, he got Putin’d into being the Chamberlain.

The upside of all this is that the Left slightly improved its voting share, but the entire bloc is in disarray, fragmented and rudderless. Its most prominent figure, Jean-Luc Mélenchon, came within 400,000 votes of matching Le Pen, but he suffers from the key handicap that plagued Jeremy Corbyn and, in a different context, Bernie Sanders: Centering the Left-wing around his own figure instead of doing the taxing, long-term and collective work that is rethinking what does the Left have to offer to counter this widespread feeling of malaise. Just like Corbyn and Sanders, Mélenchon has chosen street-cred and ideological purity over the things that might actually help him secure a victory.

When Gabriel Boric won the Chilean presidency last year, “Chile” was a trending topic on French Twitter the day after, with the French left started having a conversation on how to recover the lost ground, but as 2022 rolled around, they chose the comfort of fragmentation after a catastrophic failed attempt at a primary for the bloc.

I would’ve liked to address French Leftists here and tough-love them into getting their shit together, but saying it in English would’ve canceled all the street-cred endowed onto me as a Chilean Leftist. The one thing that must be said is that they shouldn’t even think of abstaining or spoiling their vote in the second round.

First of all, in the face of fascism, spoiling a vote is immoral. Second of all: Awww, you don’t like having to vote for a middling Centrist that you oppose to prevent a far-right opportunist from winning the (much too powerful) Presidential seat? Welcome to what US progressives have had to do since FDR died. Third of all, seriously, for some reason, Macron might have a slight advantage in the polls, but these are going to be some hard-fought couple of weeks. When we campaigned for Boric last year, we always worked on the anxiety of the worst-looking polls, even though they started improving substantially day after day. You don’t need to campaign for this guy, but you do need to do the bare political minimum to keep a far-righter from having access to nuclear codes. Again. You, as actual Leftists outside the Anglo-specter of nihilist naiveté, know damn well that a far-righter’s promises of moderation are worth the two-ply toilet paper they are written on.

But the most important reason you gotta vote for this putz against the evil nutter is because, in a weird historical denouement, the Left holds the keys to victory over a Centrist. That’s a much better position than you could imagine. Using that power is, to quote a certain uncle, your responsibility.