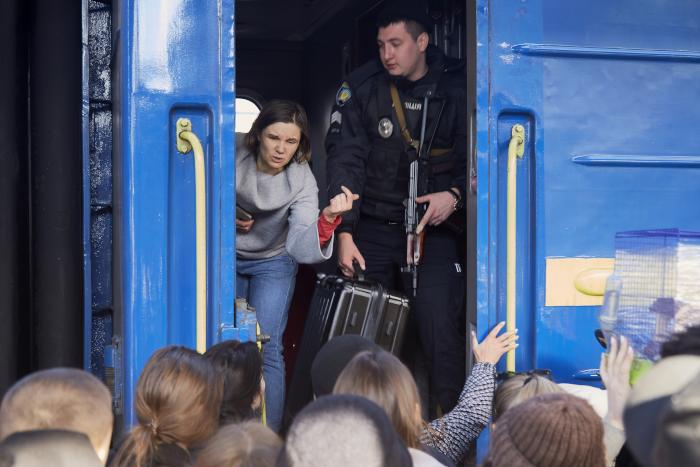 One thing I’ve never been able to read much about is what happens to the tens of thousands of people that evacuate besieged cities. We have seen the pictures of what war does to a city over the last century: In Berlin, Warsaw, Stalingrad, London, Hiroshima, Grozny, Baghdad, Aleppo, husks of buildings, streets turned into rivers of rubble, steel bars, wood chips, and tram chassis, turned into a 3D puzzle that makes you want to give up on any thought of reconstruction. Block after block of empty neighborhoods, with corpses here and there, and the few that stayed behind regressed into hunter-gatherers. But for every one that died in a city’s wreckage or was taken prisoner, perhaps a hundred or more were displaced. Where do they go? Is it only refugee camps for them? Camping on the side of a highway while they make their way to a border? Sheltering in a rural town with relatives? For how long? How many under one roof? Is there a time where tensions inevitably flare up within those expanded households?

Kyiv in the early morning of February 24th. 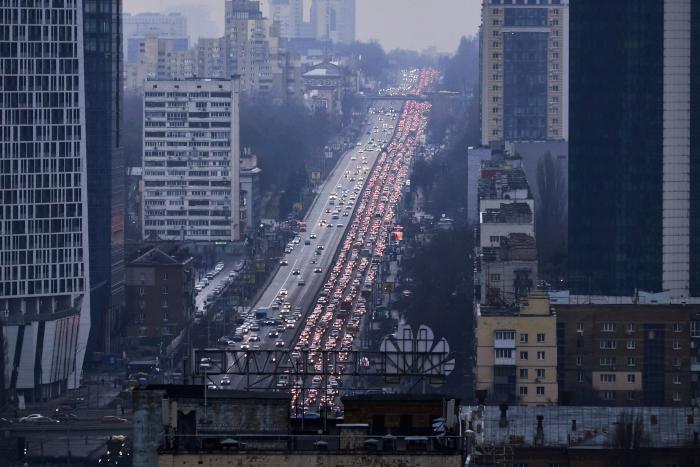 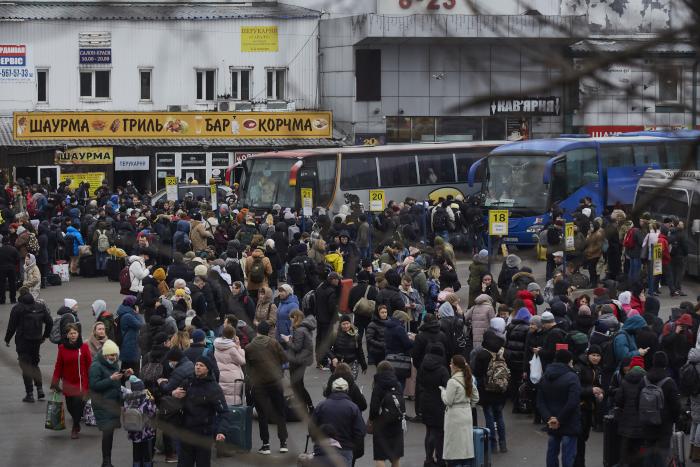 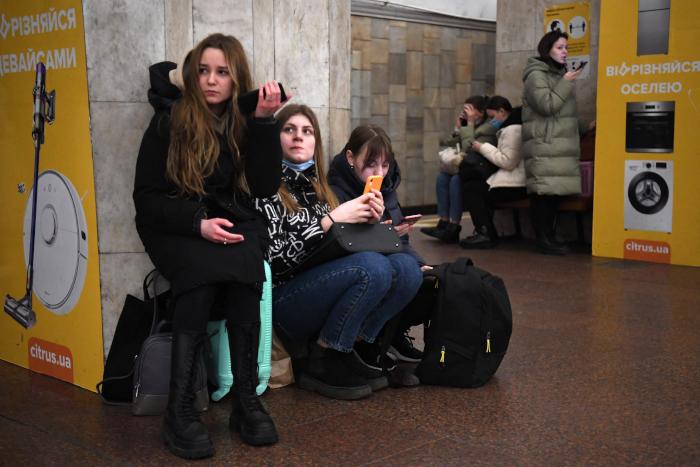 Let’s get two things out of the way: Yes, there are a lot neonazi militias in Ukraine, a shameful legacy of unresolved history, in which A MINORITY collaborated with the nazi occupation. In reality, over 6.5 million Ukrainians were killed during World War II, out of which 1.6 million were Jewish. And yes, the US Government ended up funneling arms to these nazi self-traitors because, goddammit, that has been that country’s idiotic foreign policy for decades now (Yo, CIA: you do know there are Liberal-Centrists that are more than willing to fight for their countries? You should know; that’s how you get like a third of all Democrats in Congress). But the other reality is that while there are fascists plaguing Ukraine’s political system, the support for the neonazi party Svoboda more or less waned, and the overwhelming majority of the parties are some combination of big-tent, catch-all centrist populism and pro-European. And let’s face it, if wiping out nazis in militias and in politics merited a war of aggression, then the priority target should be the USA.

But of course you all know Putin’s arguments are bullshit. In the back of your heads, even the most anti-West of you have the badgering voice in the back of your rhetoric telling you that nothing justifies this. Allow me to become that voice.

There are too many Leftists all over the world that f**k with Putin, which is a betrayal of everything that we as Leftists should stand for. And yes, that assertion is grandstanding and generic; I’m not the right person to define what Leftists should stand for. But I do know Leftists who screw with Putin, and I know that your endorsement of the guy is based only on the fact that he is an the enemy of the USA and the UE. But it’s not just a cynical “enemy of my enemy” doctrine that has got you supporting or, more commonly, justifying the Russian Government. Because most of you wouldn’t waiver on condemning China and Xi Jingpin. No, you have sided with Putin because you have Ostalgia, the word Germans coined to refer to the longing for the days of the RDA (“Ost” being East in the language), arising from neoliberal economic deprivations in eastern Germany. You are “ostalgic” for a fantasy of the USSR, for a utopian promise that collapsed in spectacular fashion 33 years ago. And like all forms of nostalgia, it’s based on selective memory, a fogging of dark issues we just can’t deny, a projection of our current mindsets into the past, a fixation on some cultural artifacts of the period and, of course, a foundation of legitimate discontent with economic precarity.

Hmmm, I wonder what sort of people also build their entire political ideology on those traits? I know that toxic nostalgia is foundational for a certain type of political ideology, but for the life of me, I can’t remember which… I thing it started with an “f”.

Newsflash, I’m probably not the first one to say tell you this, but Putin is not a secret communist who will reinstate the USSR and its historical project. If you think that, you’re on the same wavelength as all those Evangelicals that swear by the former guy and consider him a godsend, foretold in biblical prophecy or something. Putin is not your champion, because the Russian Communist Party itself is the target of political persecution and a growing, actual opposition to his reign. Putin’s project does consider restoring the Union part of the USSR, but there’s nothing socialist and nothing republican about his project. Can we honestly say he is any different from a tzar, surrounded by a court of oligarch and yes men, living in luxury villas and pushing Russia further into reactionaryism?

Or do I need to remind you what it’s like to be an LGTBIQ+ person in Russia? Do I need to describe any of this again? Do I need to remind you that, in making Russia’s economy resurgence dependent on fossil fuel exports, fighting climate change isn’t in his interests? Do I need to remind you how his entire appeal has been built on a literal strongman image, with Putin becoming a living embodiment of hypermasculinity? One that reactionaries all over the world ate up, along with the fact that he is a white European, to feed their own toxic ideas of gender and politics? Do I need to remind you how he has pounced on Russian Nationalist’s obsession with the bronze-age era site of Arkaim (probably of Proto-Indo-Iranian origin), coopting its significance into a discourse that veers way too close to the nazis idea of “Aryans as the fathers of Europe”, though transposed this time to Russia?

Or do I need to remind you about what he did during the Second Chechen War, by which time he was the Premier, and would soon become the President? The tens of thousands of civilians killed through bombing raids and war crimes in a country of roughly 1.1 million people at the time? Not to mention the lack of clarity on the number of Russian soldiers killed, probably in the tens of thousands according to the now silenced Committee of Soldiers’ Mothers of Russia?

Or do I need to remind you how everyone in the US’ far-right that, almost everyone in the GOP the former guy included, have simped for Putin at one time, and have outright endorsed this war of aggression?

Oh yeah, because it only makes sense: One is an authoritarian dictator that came to power on the promise of restoring Russia’s greatness and dismantled whatever chance Russians had to become a democracy while selling out the economy to oligarchs of his choosing and keeping within the State the most valuable economic sectors. He has basically set out a chart for the GOP to follow in dismantling whatever chance the US could have to become an actual democracy and pivot into authoritarianism while they split the spoils of the economy among oligarchs. Just without the one part that is OK, the one with state-owned economic sectors. Of course, they also see in him a great white hope and one that didn’t need to fight a cultural war; he simply stamped it out. Considering how the GOP’s reactionary church keeps losing out in the “marketplace of ideas,” why wouldn’t they admire the guy who took the path of lessening the resistance?

Ethno-nationalism, crony capitalism, anti-feminism, anti-diversity, anti-welfare. This is who you are endorsing when you endorse Putin, or when you twist yourself into making excuses for him for a war Russians didn’t want. You are defending the person who has put us at the most dangerous moment we humans have experienced since… 60 years ago. You are supporting yet another leader from the post-war generation (yes, Putin’s also a Boomer!) who is too fixated on the past to leave anything for those of us who’ll live in the future. None of this is what we in the Left should stand up for.

If there was a way to boil down what being a Leftist is, if we could reduce it to one sentence, perhaps that sentence would be “Going against the default structures of the entire history of Humanity.” Or, at least the Western one. That has meant over a century and a half of unlearning, of expanding, of questioning our foundations, of thinking how a new humanity should be. None of that includes imperialism, be it from the US, Russia, or China. None of that includes someone like Putin or the former guy. But the corolary of all that includes sticking up for the little guy, the subaltern in a given historical context. That subaltern, right now, is the Ukrainian people. Yes, peace is always the answer, but the appeal to peace is hollow like celebrities singing from their homes in the midst of war. Appealing to the better nature of world leaders is a waste of time and energy when one side does not have a better nature. This is a human horror, but don’t ask me to feel equally sad whenever the bigger force loses.

I tried here to come across as a better person that I am, but I’m not the kind to keep a lid on myself when someone pisses me off. And boy, am I pissed at the ones who fully embraced Russian propaganda (and cash, a l l e g e d l y), from the comfort of the United Kingdom or the USA. So while I appeal to the ethics code of any Leftist who reads this, I would like to tell everyone working for that rag called The Gray Zone to screw themselves. I would rather have a million Rick Wilsons on my side, at any time, than a single Max Blumenthal.

If Putin’s belligerence turns to the Baltic, the very notion of the Socialist-Democratic welfare state is on the line.

Greetings from a Finnish leftist! The international situation has apparently left many people in the English-speaking countries confused. I write this thread in the hopes of sharing a perspective I believe is widely if not unilaterally shared in Finland, most leftists included.

What we see happening in #Ukraine right now is, to put it bluntly, Russian (or more precisely, the Kremlin's) imperialism. If no other evidence convinces you, I beseech you to read a translation of Putin's speech yesterday.

This has very little if anything to do with NATO, and almost everything to do with Putin's desire to reinstate the Russian Empire. He has consistently maintained in public that it was a "mistake" to "allow" the former Soviet republics to become independent.

If there’s anything close to a silver lining, it is that this must be a very confusing time for fascists about who to root for.

Yes, yes, Alberto Cox is a NATO plant… yada yada. Please support the Ukrainian people through any of these links.