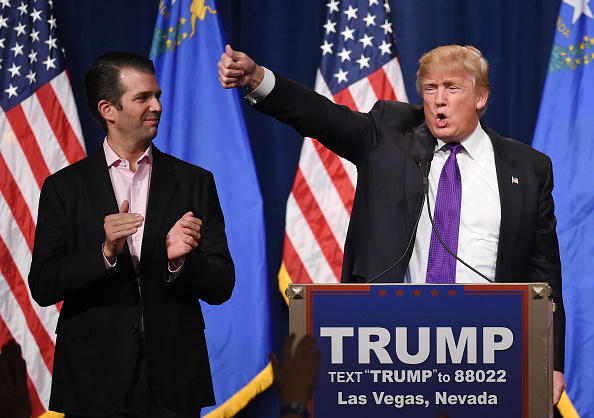 Election Updates: Win Or Lose, Don Jr., He Will Never Love You

Meanwhile big Democratic counties like Harris and El Paso keep on cranking out votes like they're never going to stop. https://t.co/DEXCfkZ9Ib

NEW: A second person with direct knowledge of the Trump campaign operations says, what’s happening today in Pennsylvania is “not ideal.” https://t.co/RWUqWaXGGW

1:00 p.m. — Election day is ironically a fairly slow news day, at least until results start coming in around 7 p.m., so I don’t have a lot to add here, except to give the commenters a new space to chat. I will say, however, that I love the juxtaposition of these two headlines from Vanity Fair and Vice:

NEW: Deutsche Bank is trying to end all ties with Trump. They are exploring selling his loans, or, if he loses, demanding payment. Because the loans are personally guaranteed, the bank could attempt to seize all of Trump's assets if he does not pay. https://t.co/WoJQHkKouS

Then there is this if you wanted to add hot, boiling rage to your election day anxieties!

Vote for your country. pic.twitter.com/8OtM4cAyfk

Trump “jokes” that he’ll never speak to his kids again if he loses, and then thwarts a Don Jr. attempt to hug him.

Trump jokes that he won't speak to his kids anymore if he loses pic.twitter.com/CQg2Xbl3Xe

Don Jr. wanted a hug at the final rally of the 2020 campaign, but daddy said no way. pic.twitter.com/tJP6V8fnFK

Win or lose, Don Jr., he will never love you. It’s the only consolation the rest of us may have when we wake up in the morning.

Elsewhere, SHUT UP NO ONE ASKED YOU NATE GOD!

You're not going to learn anything useful about the election outcome on here until 7pm, i.e. when they start counting votes.

Finally (for now), I leave you with this from Elizabeth M., a spectacular reader of the site, who sent this along to soothe our souls. It’s “a classical-style 30-minute cantata, using the transcript from the Alberto Gonzales hearing” from way back when. This is a three-minute excerpt, and it really is soothing.

← Andy Daly On #CONAN Is The Exact Distraction I Need Today | Twitter Reacts to Shell, Yes, That Shell, Asking Them to Help Fight Climate Change →