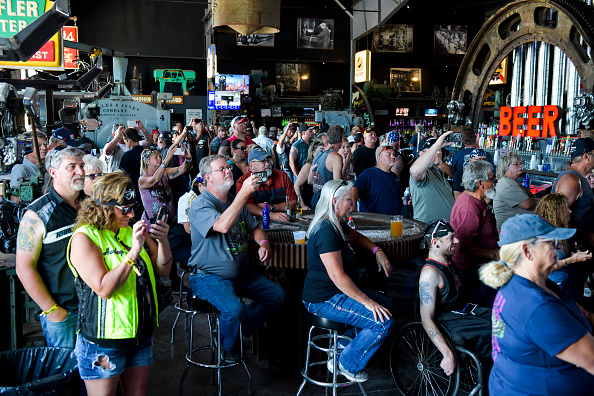 South Dakota is one of the very few states that has put in absolutely zero Covid-19 shutdowns this year, which is a big reason why Trump decided to give his big 4th of July speech at Mt. Rushmore, because it’s one of the few places in the country where there are no crowd-size restrictions. The numbers there aren’t bad in S.D. — they fall between Minnesota and Oklahoma on a cases per capita basis — but given it’s low population density (46th in the nation), those numbers should be better.

Still, Governor Krista Noem may or may not be vying for a slot on Donald Trump’s presidential ticket, so she has a vested interest in keeping things as wide open as possible. You know, for “freedom.” That apparently includes allowing tens of thousands of motorcyclist to converge in the South Dakota town of Sturgis with their MAGA hats and their “Screw Covid I went to Sturgis” t-shirts over the weekend.

T he numbers in South Dakota have been growing in the past couple of weeks, and yet, masks are not worn, and social distancing is not respected. “We are allowed to make our own choices,” one attendee said. “If we get it, we chose to be here.” True! Fair enough, except for all of those people who are potentially endangered when the tens of thousands of motorcyclists return back to their home states. But, you know: American individualism! Hoo-rah!

But, like: Whatever! You ride a Harley, you vote Trump. You must be a tough guy or gal who ain’t afraid of any old virus, which is why these thousands of true bad asses got together to watch a … Smash Mouth concert. Really?. They are risking their lives for … Smash Mouth? They really aren’t the sharpest tools in the shed, are they?

these people risked it all to see Smash Mouth last night pic.twitter.com/6yDbVXXEGN

falling into a coma at the thought of smash mouth singing "it doesn't make sense not to live for fun~" "my world's on fire, how bout yours, that's the way I like it" to a bunch of old people who are going to die in a pandemic b/c they can't spend 5 mins not being catered to pic.twitter.com/J1UXot776x

the entirety of twitter when smash mouth risk the lives of thousands for a fucking concert pic.twitter.com/AwYLyHUvKu

i have seen Smash Mouth live and under no circumstances should anybody EVER risk their life, well-being, or even 30 minutes of their time for that experience https://t.co/fqVpPsBINX

Smash Mouth frontman Steve Harwell is said to have told the crowd: “We’re all here together tonight! Fuck that COVID shit!” The thing I’ve noticed so far about the virus is that, while it doesn’t really care who you are, it seems to have a very strong preference toward irony.

I should note here, also, that Smash Mouth wasn’t the only band at the Sturgis music festival. There were others, too, who I’m sure were worth risking their lives to see, like … Buckcherry, and .38 special, Lit, Quiet Riot, and Reverend Horton Heat.

Oh, Reverend! How could you?!