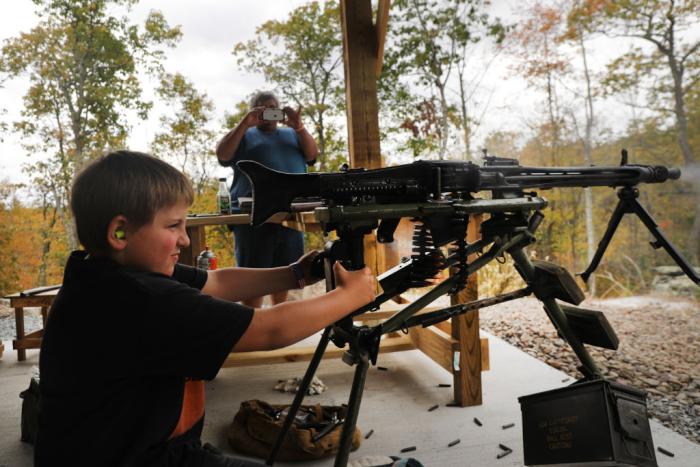 Several articles came across the Pajiba Slack that grabbed my attention. First, a number of media creators including Shonda Rhimes, Judd Apatow, and Eli Roth signed a pledge helmed by the Brady Center to Prevent Gun violence to voluntarily change the ways guns and firearm safety are shown in their productions. For example:

• Use our creativity to model responsible gun ownership and show consequences for reckless gun use. We will make a conscious effort to show characters locking their guns safely and making them inaccessible to children.
• Have at least one conversation during pre-production regarding the way guns will be portrayed on screen and consider alternatives that could be employed without sacrificing narrative integrity.
• Limit scenes including children and guns, bearing in mind that guns are now the leading cause of death for children and adolescents.

I feel like Eli Roth has given a bad enough name to hacksaws and bear traps that maybe his feelings on guns in movies aren’t relevant.

Second, Bill Maher emerged from his own butthole long enough to berate Hollywood for leaving their guns unlocked and loaded within easy access of teenagers oh wait no it was because Pretend Violence Is Bad.

Guns are presented “over and over again” as the best solution to life’s problems. “They call them action movies,” said Maher. “They should call them revenge movies.”

“Getting revenge on them that wronged ya” is the theme of most action movies, which are “made for and loved by young men.” The trope of a nice guy who is pushed too far just doesn’t create a culture of violence, Maher contended. It creates “a culture of justified violence, Maher said.

Hollywood largely condemned the actions of Wisconsin vigilante Kyle Rittenhouse, “But then they endlessly produce movies with that exact plot,” Maher said.

While allowing that he’s not in favor of censorship or organizing society around “what crazy people might do,” Maher noted, “Every bad thought in all of these movies is how to get revenge.”

The fact that Maher gave Kellyanne Conway a platform that same night to spread and popularize her endless stream of falsehoods somehow failed to cause a terminal case of irony poisoning.

I can at least understand where Rhimes, Kimmel, Apatow, et al are coming from. They looked at a massive problem overwhelming society and tried to offer not a solution but a moment of camaraderie, of hope for a better tomorrow with a shared message or small step. Bill Maher’s only excuse is that he’s an arrogant twit who thinks Dave Chappelle should use all the transphobic material he wants, but that writers and directors should censor their projects when it comes to guns.

Like Maher, Apatow, and Rhimes, I’m old enough to remember when Eric Harris and Dylan Klebold shot up Columbine High School. I remember their actions being blamed on bullies, video games, Marilyn Manson, and trench coats. It was the same moral panic that in the 1980s led to Tipper Gore’s crusade against explicit lyrics and outraged parents burning Dungeons & Dragons manuals. Their parents led the same crusade against the Beatles, Elvis, James Dean, and Marlon Brando. Go back further and there were protests against the dirty blues and sock hops and probably Irish jigs. The one real difference is that evangelicals and other religious fundamentalists aside, no one really believes any longer that “Hound Dog” or DOOM led to the collapse of western society. But the urge for scapegoats remains.

The impulse behind the #ShowYourSafety pledge is a good one. To their credit, several times the letter clearly states “The responsibility lies with lax gun laws supported by those politicians more afraid of losing power than saving lives.” Unfortunately, they prove unable to resist the bait so carefully placed before them by decades of conservative, religious talking points by advocating for change that already exists. I can honestly say that every recent movie or television show I’ve watched that featured guns have been mostly free of bad firearm etiquette. From John Wick to Peacemaker, Stranger Things, and even The Happytime Murders, protagonists practice trigger disciple and muzzle control. Those that don’t - like Ready or Not’s delightful, maid-killing Emilie de Lomas (Melanie Scrofano) - almost invariably murder someone they don’t intend to.

Likewise, I can’t remember the last time children and firearms were put together in a positive light on camera. Cassie hunting with her drunk father in The Flight Attendant couldn’t be more obviously a terrible combination. Homelander’s son Ryan and Eleven on Stranger Things, both of whom carry around a metaphorical loaded gun at all times, clearly demonstrate the dangers of armed children.

It’s not television. It’s not movies. It’s not music and it isn’t video games. It’s the guns and, in the case of school shooters, it’s usually the parents. Try as they might to do good, the creative minds who signed the open letter give cover to gun dealers, bad parents, and mass shooters in search of obfuscation. Maher, a staunch supporter of gun control, still manages to stand side-by-side with Tipper Gore while ignoring that violent stories have existed since before the written word and have never killed a single soul. Governments, religious organizations, and violent citizens do that on their own at a pace accelerated by modern weaponry. Movies aren’t the problem. This is.

Awww so cute and not batshit insane at all pic.twitter.com/LmIik9064j

This kid is the problem. His parents are the problem, and not just for naming the boy “Maverick.” No movie told them to teach a kid in preschool how to lock and load. I grew up with guns in an era where children were taught gun safety first and often for years before we were allowed to touch a firearm. That bright, empty smile of a 4-year-old racking the slide and pulling the trigger over and over shows his parents taught practical competency but no concept of that weapon’s lethality. I can’t even imagine how my father would’ve reacted had he caught me, in kindergarten, pulling the trigger on his shotgun. I was never hit by my parents, but that might have been the straw that broke the camel’s back.

Ironically enough, gun nuts are entirely right that firearms themselves aren’t the problem. It’s their own irresponsible behavior that’s led to our epidemic of violence. We need to understand that while there are millions of gun owners who believe in keeping guns from children and common-sense gun laws, what you see above is no longer the exception to the rule when it comes to die-hard gun advocates. It’s been happening for more than a decade; in 2008 an 8-year-old boy was killed at a gun expo operated by the Pelham, MA police chief. The boy’s father insisted the boy be allowed to try a fully-automatic Uzi submachine gun, and the expo staff did not object. The gun’s recoil forced the barrel up and the boy shot himself in the head. Former police chief Edward Fleury was cleared of involuntary manslaughter charges. The father was not charged. The gun lobby’s insistence on instant firearm access to impulse buyers and children, and their obsession with ever more powerful and faster-firing weapons have led to this. Guns are no longer dangerous tools to the average owner but instead thrilling toys. The fact that a mass shooter can legally walk into a gun store and 15 minutes later murder a restaurant full of people is not a bug to John Smith, card-carrying NRA member. It is a feature. Because John Smith’s desire to instantly purchase a gun — and maybe kill his wife with it — matters more than public safety.

The gun industry and their political allies have abundant reasons to celebrate even a minor focus on movie violence. Even sweeping changes to guns’ representation in the media wouldn’t amount to a band-aid on a bullet wound, but it justifies the financial and political drive to sell as many guns as quickly as possible. The gun lobby says we need guns to protect ourselves from guns. We need guns to protect ourselves from the most well-armed police and military in the world should they ever “come for our guns,” which they never have and, should they choose to do so, would roll over civilian resistance like a tractor-trailer over a chipmunk.

Despite creators’ best intentions and probably internalized guilt, measures like this only divert attention to the real causes of our national tragedies. Fictional entertainment doesn’t kill people. Treating weapons like toys and putting them in the hands of irresponsible and dangerous people does.


← James Patterson: White Male Writers Are Victims of Racism | 'Joker' Sequel Reported to be a Musical; Lady Gaga in Talks to Star Alongside Joaquin Phoenix →