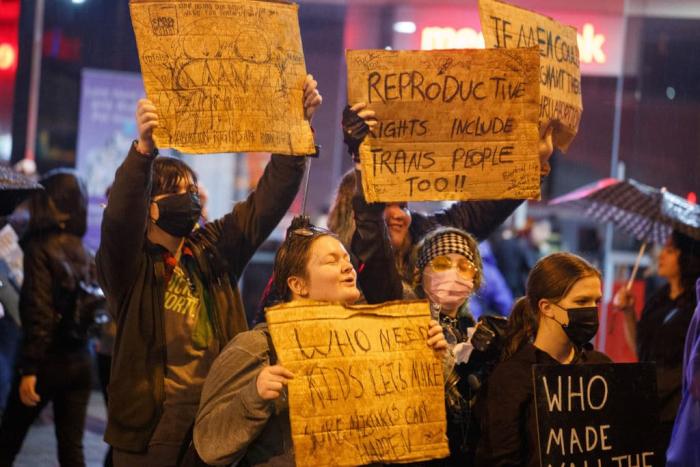 If you’ve paid any attention to British politics and social issues over the past five years or so, you’ll probably have noticed that things have gotten really f**king transphobic on my side of the pond. J.K. Rowling, seemingly eager to destroy her legacy with virulent anti-trans propaganda, recently claimed that trans women have a ‘luxury identity.’ Think-pieces getting angry about preferred pronouns, gender-neutral spaces, and the existence of trans celebrities pollute the media sphere every day. Indeed, it seems like the easiest way to get a career in the notoriously cloistered and class-dominated field of U.K. newspapers is to just start hating trans people and claim you’re being discriminated against because of it. This ceaseless screed of propaganda has had an insidious real-life impact. In Scotland, hate crimes against trans people rose a staggering 87% in the past year, all as transphobes try to stop the government from making the Gender Recognition Act more progressive. According to the European Region of the International Lesbian, Gay, Bisexual, Trans and Intersex Association — also known as ILGA-Europe — a rise in transphobia has damaged the U.K.’s progress toward LGBTQ+ equality. The U.K. Government has moved to ban conversion therapy but not for trans people.

Alas, none of this is exclusive to the U.K., as trans people, particularly children, have faced a barrage of exclusionary and discriminatory legislation across America and well beyond. I focus on the U.K. mostly because this is my home turf and because that has allowed me to see firsthand as a cis woman how truly widespread the propaganda has gotten. I live in a pretty left-wing city and I’ve seen a lot of ‘adult human female’ posters and stickers around town. My mum even saw them in our hometown, which is hardly a beacon of political discourse.

Let us be clear here. These people are not ‘concerned’ about women’s rights or ‘critical’ of our gender binary. They don’t want to ‘protect’ us or have a debate on the issue. They want to legislate trans people out of existence. They’re overwhelming a marginalized community from all sides, powered by a bigoted media and politicians who will do anything to hold onto the dregs of clout they possess. Trans and non-binary people are a canary in the coalmine, particularly in this hyper-conservative era where LGBTQ+ rights as a whole are at risk of disappearing.

So, it should surprise literally nobody that, in the wake of the Supreme Court striking down Roe v. Wade and opening the doors for an era of staggering loss for bodily autonomy, the usual suspects are blaming trans people and their rights for the decision. For the right-wing magazine The Spectator, noted transphobe Sarah Ditum tried to blame trans-inclusive rhetoric and a totally made-up fear of saying ‘woman’ for the problem. On The Guardian, Sonia Sodha, another noted transphobe, said that women ‘must be allowed to defend abortion as a sex-based right’, which was a dog-whistle way to yet again blame trans-focused ideas for a conservative attack on bodily autonomy. Kathleen Stock, a former professor now known mostly as a transphobe who runs to national newspapers to claim she’s being silenced, tweeted out on the day of the SCOTUS decision that she knows ‘full-on pro lifers’ with ‘fine qualities’. While studiously avoiding actually talking about Roe v. Wade on Twitter, Rowling retweeted a letter from the transphobic anti-choice Baroness Emma Nicholson (with whom she co-runs a charity) citing support for various transphobes. By the way, Nicholson is also hugely homophobic and voted against repealing Section 28. That open letter also claimed that humans have existed for over 500 million years. Huh. With friends like these, eh, Joanne…

Has *any* GC commented on the fall of Roe v Wade without exploiting it to attack trans people? Even one? pic.twitter.com/dac1SAwtOt

JK Rowling has retweeted a letter which claims that humans have existed for 500 million years.

The letter, by the anti-gay, anti-trans, anti-abortion Baroness Nicholson, is attacking a Library for cancelling a talk by infamous transphobe Julie Bindel during Pride.#JKRvsLGBTQ pic.twitter.com/keAb7kDH5m

Definitely-a-real-feminist Kathleen Stock reacts to the fall of Roe-v-Wade by coming out swinging… …in defence of pro-lifers. https://t.co/5UgO0Hr7Ug

So Allison Bailey has tweeted that trans people shouldn't have the right to have children. This is not 'legitimate concerns' this is eugenics/genocide rhetoric. Many trans people are parents or plan to be. There is no evidence that trans parents are any different to cis parents.

The "LGB Alliance" was founded purely to fight against trans rights.

It is abhorred by the vast majority of LGBTQ people who know anything about it.

That @TNLComFund has given them a grant to set up a "helpline" - in Pride month! - is trolling LGBTQ people on a grotesque scale. https://t.co/vwqekH3hoW

I unfortunately could go on and on with this nonsense. It’s a veritable sh*tshow of bad-faith smarm from a group of people who have zero true concern for the loss of women’s rights. Who’s all that surprised that they’re super in favor of people being stripped of the right to do what they want with their own body? But this rhetoric and the inescapable nature of it in the media should be called out at every opportunity.

It does not diminish cis women to note that not all women have periods and not all who have periods are women. It’s not ‘giving the bad guys what they want’ to fight for trans men to have safe access to cervical screenings. No fight for reproductive justice can happen without our trans and non-binary community. If you don’t see a direct line between the extinction of abortion rights and the denial of gender-affirmative healthcare to trans kids then you need to take your head out of the sand.

The media is widely dictated by the idea that, rather than truth being prioritized, the correct approach to every topic is to present the worst misreadings of reality as a stance of equal merit. The New York Times just published a piece claiming that the Supreme Court’s hyper-conservative ruling is of the same level of tangible threat to our rights as a fight for pronouns and inclusive vocabulary. This smarmy ‘but all sides suck’ stance is never right, I promise you. It’s a sign of moral weakness, a cowardly move by people who have nothing to risk. To reinforce this false dichotomy is simply to further fuel the fires against those who are already stuck inside burning houses. We already have the hard-right talking-heads calling drag queens child predators and gay teachers pedophiles. What, you think that comparing trans people trying to get healthcare to fascistic politics won’t further empower these creeps?

Shame on the New York Times for waging a hateful campaign against transpeople, and for jumping on the fall of Roe as an opportunity to escalate it.

If your fight for bodily autonomy does not include the support and protection of transpeople it is not an ethical fight. pic.twitter.com/uLwDaKfWmt


Evangelical American groups are already turning their focus, and considerable financial assets, to Britain, where abortion access is nowhere near as progressive or destigmatized as some would have us believe. The fight for liberation from oppressive anti-choice forces will feed on this increasingly queerphobic discourse, make no mistake about it. We spent too long positioning abortion as this topic we could have some sort of middle ground on with our opponents when all that did was give them further ground to dominate the conversation. We can’t do that to our trans and non-binary friends. They’re not a bargaining chip or an ephemeral concept that exists only for think-piece fodder. They didn’t destroy our rights: they’re fighting harder for abortion access and reproductive healthcare than any columnist trying to push the blame onto their shoulders.


← Fantasia 2022 Preview: Five Films We Cannot Wait to See at This Year's Festival | 'For All Mankind' Tackles the Myth of the Great Man →