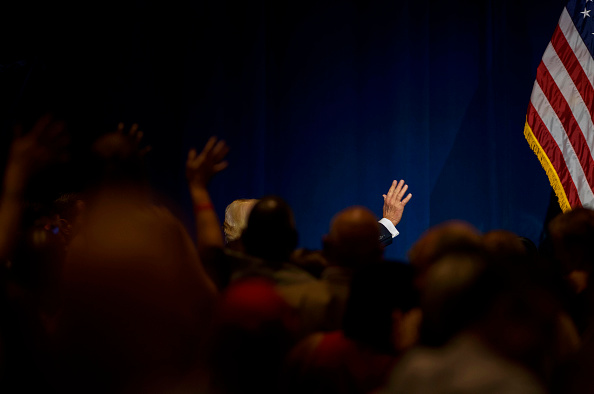 Politically speaking, it’s a bit of a slow news day this morning, so much so that the Times is even dragging out the political corpse of Anthony Weiner for some reason (he sucked, but I do miss Huma). COVID numbers continue to decline (only 6,000 infections yesterday), and, well, it looks like the Biden Presidency is essentially being held hostage by Joe Manchin now. It was a good run, Joe.

So, what’s left? The former President returned to public life over the weekend. Did you know that? He attended a rally, just like old times! I’m sure it’s all anyone is talking about now, right? The substance of his speech? His plans for the future?
No? They’re talking about what? His pants? They were on backward? Or they were not on backward? Wait? Does NPR have an explainer on Trump’s pants this morning? OK, well that’s hilarious. Trump’s huge return to public life gets overshadowed by his pants. Why? What happened? Oh! This happened!

Those pants look like they’re on backward, because there’s no visible zipper, and also, Trump has serious front-butt.

Did Trump not have a single staffer with the guts to tell him that he put his pants on backwards last night? pic.twitter.com/92LPkg6lWz

Alas, it is not to be. Snopes fact-checked it, and cross-referenced the allegation with images from Getty and discovered that there was, indeed, a zipper in the front of those pants. The pants were not on backward, they were merely very wrinkled, which is to say: His staff hasn’t completely abandoned him. He’s still got Jason Miller, but Jason Miller doesn’t know his ass from a hole in the ground, and so no one apprised Trump of the wrinkled pants situation.

The important thing, however, is that the non-backward backward pants overshadowed anything that he might have said, although I understand he just continued to repeat the same things he’s been repeating since the election. It’s interesting, though: The Times did a piece on how his messages now travel across social media now that he’s been deplatformed. Turns out, he’s got a lot of sycophants who continue to spread his statements across mostly right-wing media (although, the left spreads some of his messages, too, mostly to make fun). What’s interesting, however, is that when he talks about the culture wars or Biden, his statement still receive a lot of engagement. However, because of the filters that Facebook and Twitter have installed since the election, when he talks about the Big Lie or other disinformation, his statements pretty much die on the vine.