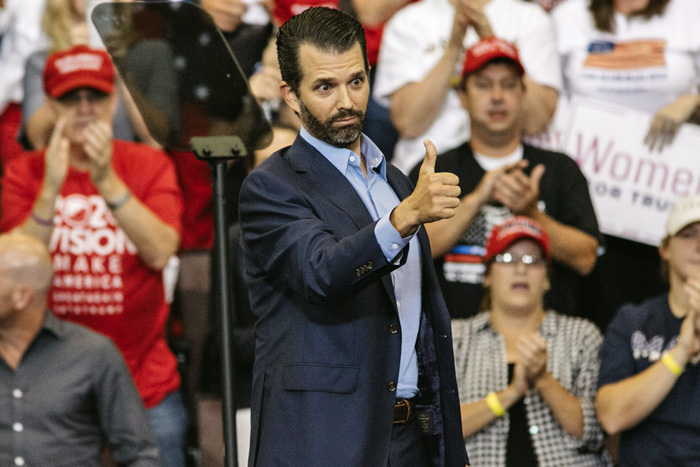 Last week, Donald Trump Jr. got slapped around by The View to the point where Whoopi Goldberg shut down the show a full 15 minutes early because she was so tired of seeing his face. Like his chin, it wasn’t a strong showing. So, the last thing the president’s son needed was to find himself literally running off a stage while promoting a book on how the Left are the real triggered snowflakes, so of course, that’s exactly what happened at UCLA over the weekend because this family of dunces can’t do a single thing right.

So it seems like Don Jr’s book tour is going well pic.twitter.com/m0mZQQMHSi

It also didn’t help that, once again, Kimberly Guilfoyle had to step in and defend her chinless lover, which doesn’t at all fly in the face of the shitburger patriarchy that defines the conservative right. That’s definitely not a group of over-compensating meatbags who hump their guns at the altar of masculinity. I don’t know why people keep saying that!

But while all of this is some delicious schadenfreude, once you take the very first step into the details it becomes a situation where there are no winners and everyone involved is the worst humanity has to offer. You see, the group who booed Junior so hard that he fled a book-signing event were not radical leftists that the right (and Bill Maher) constantly piss themselves in fear over. The Anti-Chin was booed by extremely hardcore conservatives who don’t think the Republican Party is racist enough. Yup. They also really hate Charlie Kirk, but do not give them any points for that even though it’s tempting. So, so tempting… Via The Bulwark:

Nick Fuentes, the 21-year-old host of a YouTube show called “America First” who was the mastermind behind the disruption campaign, gloried in the collapse of the younger Trump’s event.

Sunday’s insurrection against Trump was the latest in a series of conservative events that have seen their proceedings disrupted by white nationalist activists who believe that the president has failed to deliver on his election promises. Among other complaints, activists have cited the failure to build a wall on the Mexican border and the administration’s refusal to decrease the number of legal immigrants. Kirk has seen his own events crashed repeatedly as has Rep. Dan Crenshaw although none of the disturbances have received national media attention.

Just so we’re clear, and this really cannot be repeated enough, while promoting a book criticizing the left for being constantly “triggered” and shutting down debate, Donald Trump Jr. became so triggered by that he, let’s see, shut down debate. Huh, weird. Now, again, I’m not praising the protestors because they made a complete ass out of my ideological enemy. At the end of the day, their beliefs are actually worse than Junior’s. You don’t have to look at a situation and pick a winner and loser. Sometimes everyone involved sucks out loud.

However, is it wrong to find it oddly comforting that the right has a growing purity politics of its own? Because if there’s one thing I’ve learned in recent years, it’s that unyielding zealotry can be super handy at f**king up elections. And from the sound of this Matthew Sheffield thread, which I highly recommend scoping out, it sure seems like the GOP is going to have a problem with the racist and homophobic can of worms it let a Mushroom Dicked Yam smash open instead of carefully pulling from with dog-whistles, bathroom bans, etc., etc.

Is it bad that I will probably laugh for a thousand years if the GOP gets kneecapped in a presidential election after an obnoxious subset of voters dedicate themselves to #RacismOrBust? Because I’m going to. Although, I don’t know why I’m acting like a similar situation won’t be playing out on the left and… optimism gone. That was a fun five minutes.

← Wake Me Up Before You No No: Pete Buttigieg Leads in Iowa | I Just Watched 'Daniel Sloss: X' and Now I Want to Bang Him Maybe? →