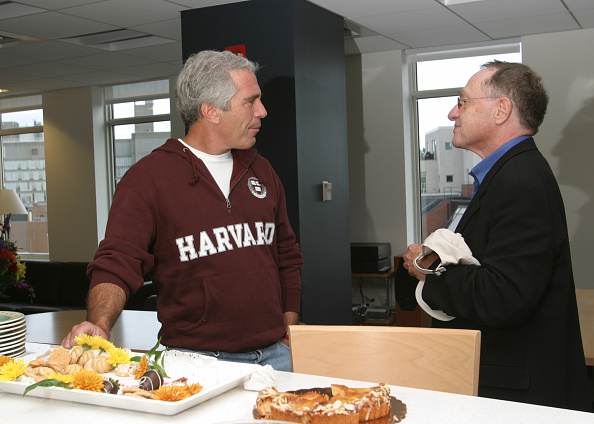 This Country is Run by Pure, Undiluted Evil

Donald Trump is being impeached, and while he is not happy about the stain it will leave on his legacy, he is also not worried that he’ll be convicted. In fact, he is so not worried about being convicted that he is trolling the entire goddamn country. There can be no other explanation for this:

OF COURSE, he’s hiring Dershowitz and Starr. OF COURSE, HE IS. Was there any other possible outcome? Just imagine to yourself who the worst possible people Trump could hire on his legal team; Dershowitz and Starr are at the very top of that list. Dershowitz defended O.J., and Jeffrey Epstein, and he’s working on consulting on Weinstein’s case. He defended Mike Tyson and Jim Bakker. If he’s rich and guilty, Dershowitz has defended him.

Obviously, Trump was going to hire him, regardless of the credible allegations of rape against a minor that have been leveled against Dershowitz. That’s icing on the goddamn cake for Trump. Because he wants to make a complete mockery of this impeachment, because he knows he can, and he will still win.

That’s why he also hired Ken Starr, who pushed for impeachment against Bill Clinton because of a lie Clinton told in a deposition about an affair he’d had with Monica Lewinsky.

this is definitely an “are you fucking kidding me?” kinda day.

It was a thin case, and now Starr is going to come in and argue that Trump doesn’t deserve to be impeached? Will he literally argue that what Clinton did was worse than Trump, or will that just be the idiotic implication? Starr, by the way, also defended Jeffrey Epstein, and he also was fired as President of Baylor University because the school repeatedly failed to respond to multiple reports of rape and sexual assault.

And really, honestly, if you’re wondering what kind of man Ken Star is, this from Wikipedia says it all:

In 2013, Starr was among many high-profile figures to express support for Christopher Kloman, a 74-year-old retired teacher at the Potomac School who pleaded guilty to molesting five female students over a period from 1966 to 1985. Starr signed a letter, written by his wife Alice, to the Fairfax County, Virginia judge presiding over the case. The letter asked for leniency for Kloman, who is a friend of the Starr family and who “took the time to chat” with Starr’s daughter, a student at the school until 1998. “Community service would be a far better punishment than having him languish in jail,” they wrote. Kloman was convicted in October, 2013 and sentenced to 43 years in prison.

Oh sure, he molested multiple minors, but he was nice to my daughter!

← Eminem Criticized for Lyric About Ariana Grande and Manchester Bombing in New Album | 'Law and Order' is Coming to Streaming via Peacock, Baby! →