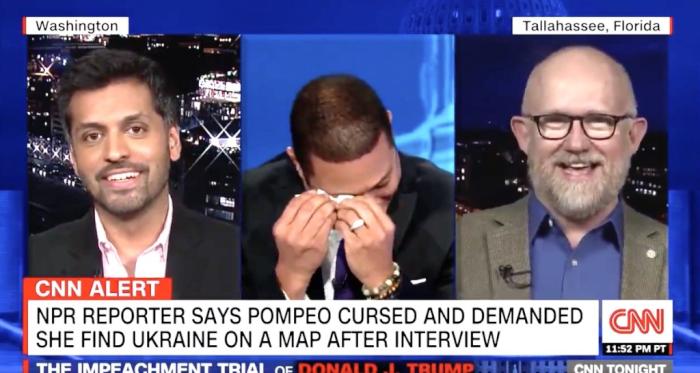 On Saturday night, after reports surfaced that Secretary of State Mike Pompeo berated NPR reporter Mary Louise Kelly for daring to ask him questions about Ukraine she told him ahead of time that she would ask (Mary Louise Kelly has since been removed from Pompeo’s plane on his upcoming trip to Europe and Central Asia), Don Lemon had Wajahat Ali and Rick Wilson on CNN to discuss the matter. Rick Wilson, a Republican political strategist, appeared to be loopy, and he ended up making fun of Donald Trump’s inability to read a map while also parroting Trump and his supporters’ mockery of “elitists,” like ‘em Yankee intellectshchuals who go around reading books and asking for tall drinks instead of small ones, goddamn libruls.

It shouldn't be this easy to distract the President of the United States pic.twitter.com/Y9Vi7GRqsp

Donald Trump didn’t care for that. And even though it was Rick Wilson who made fun of him, Trump went after Don Lemon, because why attack the white guy when there’s someone Black in the vicinity?

As to The Daily Caller headline — “America, this is what CNN thinks of you…” — I think more specifically, it’s what Rick Wilson, Don Lemon, and Wajahat Ali think of Donald Trump. Basically, in laughing at Donald Trump and his “anti-elitist supporters,” they are mockingly owning the stereotypes about anti-Trumpers in the same way that Trump voters own “deplorables.” And that gets under Trump’s skin, because that’s his trick, damnit!

But it also gets under the skin of Trump social media, where — again — they’re all outraged victims. The pizzagate conspiracy theorists and white supremacists are darling little snowflakes trying to rally aggrieved white men behind the notion that a gay black man should not be able to make fun of their own.

They hate you. They hate your families. I would rather it not be the case but there is no other way to accurately describe this pic.twitter.com/1PfE12VOUu

(Aside: I don’t know who Wajahat Ali is, but I adore how awkwardly bad he is at this joke).

← Terry Crews Fritters Away Years of Goodwill In a Series of Tweets | Prince Andrew Not Co-operating With FBI on Jeffrey Epstein Case; Accusers Outraged →