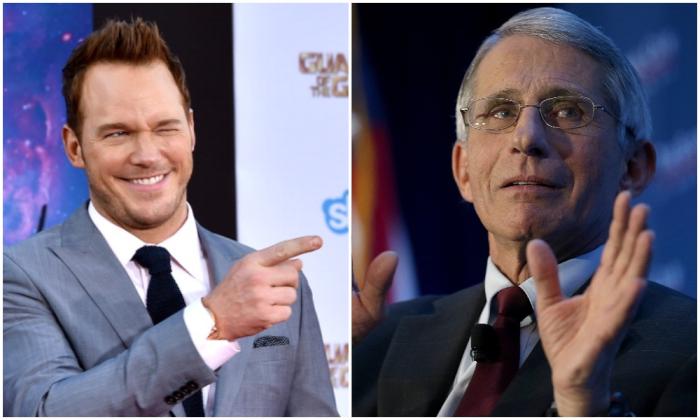 16:30 — At a rally in Arizona today, Trump keeps trying out his new line about how Joe Biden will “listen to scientists” and “listen to Fauci.” It feels like an insane, self-defeating thing to say, but I am guessing that it must be effective with his base, which is the most depressing thing ever.

3:10 — HE IS SUCH A HORRIBLE, HORRIBLE MAN. He’s making fun of how an 80-year-old threw out the first pitch. WHAT IS WRONG WITH THIS PERSON? He really is a sociopath, and he’s sh*tting on a public health expert the same way he sh*ts on political opponents and former cabinet members. Jesus Jesus 15 more days Jesus.

…P.S. Tony should stop wearing the Washington Nationals’ Mask for two reasons. Number one, it is not up to the high standards that he should be exposing. Number two, it keeps reminding me that Tony threw out perhaps the worst first pitch in the history of Baseball!

12:30 p.m. — I was going to take a break from election politics here and talk about whether Chris Pratt was MAGA — a conversation trending on Twitter right now — but Trump is attacking Dr. Fauci again, calling him a “disaster,” so we need to talk about this, instead.

.@realDonaldTrump disparages Dr. Fauci on campaign call, says people are tired of hearing from him and “all these idiots.” “He’s been here for 500 years,” Trump says and muses about firing him if it weren’t for negative press If he did. “Fauci’s a disaster.”

I don’t think that message is going to win over a lot of new voters, but it will continue to put the life of Dr. Fauci and his family in danger.

Meanwhile, instead of taking the sound advice of Dr. Fauci, a neuroradiologist by the name of Scott Atlas now coordinates the coronavirus response inside the White House, having sidelined Fauci, Birx, and everyone else. Atlas has some interesting theories:

Atlas shot down attempts to expand testing. He openly feuded with other doctors on the coronavirus task force and succeeded in largely sidelining them. He advanced fringe theories, such as that social distancing and mask-wearing were meaningless and would not have changed the course of the virus in several hard-hit areas. And he advocated allowing infections to spread naturally among most of the population while protecting the most vulnerable and those in nursing homes until the United States reaches herd immunity, which experts say would cause excess deaths, according to three current and former senior administration officials.

Atlas also cultivated Trump’s affection with his public assertions that the pandemic is nearly over, despite death and infection counts showing otherwise, and his willingness to tell the public that a vaccine could be developed before the Nov. 3 election, despite clear indications of a slower timetable.

People are now calling upon Dr. Fauci to resign in protest, but I disagree. Fauci is not enabling Trump. He’s actually speaking out against him from within the Administration while still providing the nation with sound guidance concerning the virus. I don’t want him replaced by another quack like Scott Atlas. I want someone we trust telling us when it’s safe to take a vaccine. Moreover, Fauci has been in this job for over 35 years, and he is best positioned to help the American public from within the National Institute of Allergy and Infectious Diseases (NIAID). Don’t let Trump take that away from him, or from us. Fauci was here long before Trump, and he’ll be here after Trump is (hopefully) voted out to help guide us through the vaccines.

Also: If I am being honest, I don’t think that Pratt is MAGA. I don’t think that Chris Pratt actually thinks about politics that much, which is part of the problem. He’s not a curious or particularly bright person. But also, he’s married to a Shriver/Kennedy/Schwarzennegar, so he is definitely a Republican, but I think something more along the lines of Mitt Romney or John Kasich. The thing about MAGAs — and in fact, one of their defining features — is that they are very outspoken in their support of Trump. Pratt is deeply Christian, but as far as I know, he has never actually mentioned Trump’s name, although I suspect if pressed on his political opinion, Pratt would go full Caity Lotz and tell us that he loves everyone, regardless of their politics. GFY, Pratt.

I don’t, however, advocate for removing him from the Chrisses, because it’s nice to know that — no matter how great the other three are — there’s never any question about who the Worst Chris is. It’s not even close.


← 'Helstrom' Review: Marvel's Latest Series Fails to Deliver Despite Potential | What We Talk About When We Talk About Madonna's Face →