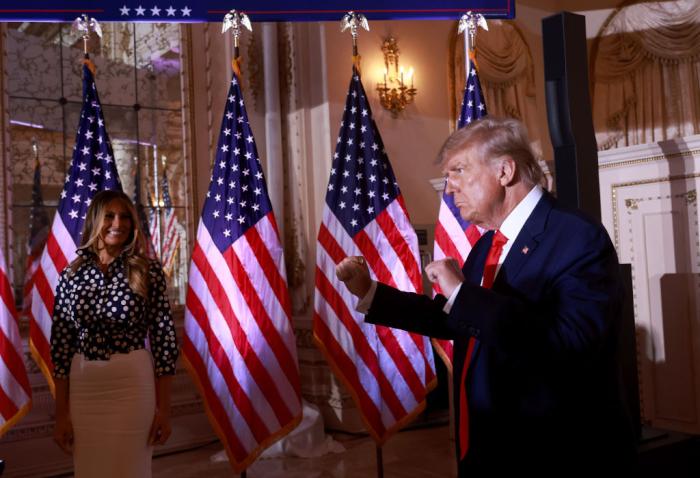 Donald Trump Announces His Presidential Run, and the World Shrugs

Last night at a packed event in Mar-a-Lago, Donald Trump announced he’s taking another run at the Presidency, to the shock of absolutely no one. His hour+ speech promised to “make America great and glorious again” leading to the delightful #MAGAGA hashtag trending on Twitter. His speech was so long that both Fox News and CNN cut away, while MSNBC didn’t bother broadcasting it in the first place.

Responses to the announcement have been markedly more subdued than Trump’s last campaign(s). After the GOP’s dismal showing in last week’s midterms compared to their expectations, establishment Republicans are lukewarm at best when it comes to another Trump candidacy. His current main draw with low info voters, namely that the 2020 election was stolen by those dastardly Democrats, only plays well with a certain audience and most likely contributed to the losses of 28 out of 29 candidates who repeated the lies. NPR is one of the few outlets that covered the announcement properly (and as a result, #DefundNPR is trending again this morning).

BREAKING: Donald Trump, who tried to overthrow the results of the 2020 presidential election and inspired a deadly riot at the Capitol in a desperate attempt to keep himself in power, has filed to run for president again in 2024. https://t.co/iqIcaN3SZA

Trump limited his personal attacks and claims of election fraud for this opening salvo, choosing instead to attack Biden’s record. He claimed the withdrawal from Afghanistan — following the Trump administration’s timeline for doing so set in the treaty he signed with the Taliban — made the US a “laughingstock.” He repeated Republican claims about escalating crime, complained about the inflation rates when they’re driven by corporate greed — and generally tried to focus on the future.

Meanwhile, Fox News has limited their coverage of Trump’s announcement, placing just one story low on their main page. The enthusiasm gap seems equally predicated on Trump’s unsuitability for a 2024 run, particularly since our only President to serve 2 non-consecutive terms was Grover Cleveland, and the fact that Trump never really stopped running for President since his last loss. The Republican establishment is shifting focus to Mike Pence and Ron DeSantis, hoping a return to “normalcy” will improve their odds. It seems unlikely to work.

MAGA are gathering outside Trump Tower in Manhattan chanting “USA!” while stomping on a DeSantis campaign poster, saying “Trump or death!” and telling Nancy Pelosi “There’s no ice cream in hell” before accusing her husband of being a “cruiser.” Not a cult, though. Absolutely not. pic.twitter.com/f4Hzx4andf

As Dustin pointed out, the man’s been an albatross tied around the GOP’s neck for 3 elections, and we all know his self-control never lasts. He’ll be back to airing his grievances soon enough. The primary path to nomination is far from a clear one. He’s facing a dozen investigations, including his theft of federal documents hidden at Mar-a-Lago; the January 6 investigations from both the House and DOJ; and a number of criminal cases against the Trump Organization in New York. That’s just a small sampling of his current legal troubles. America still remembers watching an armed mob break into the halls of Congress. He lost the popular election in 2016 by 3 million votes, and in 2020 lost by more than 7 million. Trumpian candidates are not finding it nearly as easy to win these days, and all their culture war wins — the Dodds decision and their pushback against LGBTQ rights, for example — have only served to make them less popular with all but diehard conservatives. It led to increased participation by young voters, who broke for Democratic nominees by 28 points.

I’m far from a political expert and 2016 made me leery of underestimating the gullibility of American voters. But we experienced 4 years under Trump’s incompetent thumb already. It led to chaos, including one of the world’s worst federal responses to the COVID crisis. Every day was nuts. Voter memories are short, but are they that short? The Republican establishment would much prefer a Mike Pence or Ron DeSantis candidacy, but personally, I don’t see either working out for them. Pence, despite his time working under Trump, in no way commands Republican respect, particularly from low income\low education voters, who see him as little more than an empty suit without the strength of his (i.e. Trump’s) convictions. And running a campaign that will by necessity set him up against his old boss is more likely to hurt his chances than Trump’s.

DeSantis seems like a better bet. He’s had good luck with his inane battle against the scourge of drag shows and transgender acceptance, he served in the military, and has demonstrated the same willingness to exploit personal grievances for political advancement. But as the video above shows, he doesn’t command the same kind of loyalty outside Florida that Trump does and I personally doubt he can get it. They like Trump because they see themselves in his belligerence and lack of social grace. His insults are crude and uninspired, but that’s what voters like. Like Ted Cruz, who never faced a presidential primary he can’t lose, DeSantis comes across as smarm in a suit. Both men favor a nationwide abortion ban and their animosity against LGBTQ Americans won’t go unnoticed. Both men are culture warriors, but without the mindless aggression that makes Trump so appealing. No one’s putting Mike Pence or Ron DeSantis for President banners up in 2022, yet the Trump flags were never taken down. That says something. Personally, I think Trump gets the nomination again. If it’s not him it’ll be DeSantis, and Trump will run as a spoiler third party candidate, the Right’s Jill Stein or Ross Perot. That may be the best outcome we can hope for. Let them fight.