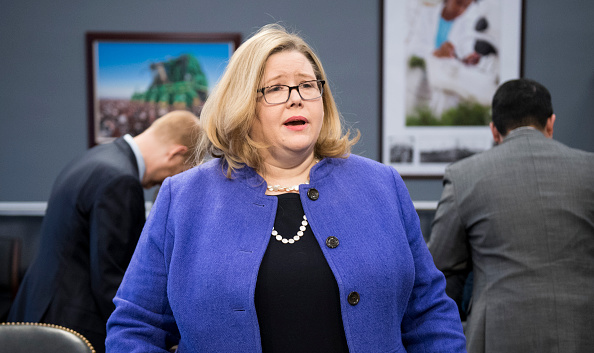 This morning, CNN has a sympathetic profile of Emily Murphy, the head of the GSA who is single-handedly responsible for officially starting the transition process at the White House. If Emily Murphy signs a piece of paper, $6 million and office space will be released to Joe Biden, he’ll receive national security briefings, and he’ll be able to start coordinating with the existing White House on the COVID response and the vaccine rollout.

The profile, clearly based on interviews and friends and friendly colleagues of Murphy, suggests that she’s been put in a very tough position, that she’s not a Trump loyalist, and that she’s earnestly trying to do the right thing, thoughtfully and meticulously, and that’s she’s feeling an immense amount of pressure from both sides.

General Services Administrator Emily Murphy is struggling with the weight of the presidential election being dropped on her shoulders, feeling like she’s been put in a no-win situation, according to people who have spoken to her recently …

… “She absolutely feels like she’s in a hard place. She’s afraid on multiple levels. It’s a terrible situation,” one friend and former colleague of Murphy’s told CNN. “Emily is a consummate professional, a deeply moral person, but also a very scrupulous attorney who is in a very difficult position with an unclear law and precedence that is behind her stance.”

Counterpoint: This is an easy call. The outcome is not in question. There is no chance for Donald Trump to overturn the election results. He’s lost virtually every major legal challenge, and the only minor challenge he won — which would not have come close to affecting the overall results — was overturned by an appeals court in Pennsylvania. . The election is over. The legal challenges are beyond incoherent — Rudy Giuliani sounds so much like Charlie Kelly right now that Giuliani’s actual quotes are being meme’d with Charlie Kelly, and if you didn’t know it was a meme, you’d have no idea this wasn’t from It’s Always Sunny.

It is over. It is more than over. Pennsylvania is a lost cause. Michigan is cooked. Georgia will affirm Biden’s win there today. Recounts aren’t possible in Arizona, and legal challenges have been dropped there. In Nevada, Trump is asking the results of the state be tossed because of voter fraud of which he has no actual evidence.

There’s nothing left. Biden has won the popular vote and the Electoral College by a landslide. Murphy herself is actually looking for another job, so she knows what’s coming! Do your damn job, Emily. The fact that she went to Smith College, and the Virginia School of Law, and that she is a “technocrat,” who is “really thoughtful about both the letter of the law, any guidelines, explicit guidance, any precedence, as well as the overall intent” is all the more reason for Murphy to do her damn job. The only thoughtful thing to do at this point is to acknowledge reality and set the transition in motion, and the only reason she hasn’t is because Murphy is scared of the backlash from Trump and the Republican National Committee, for which she used to work.


← Harvey Weinstein May Have Coronavirus Again | Kyle MacLachlan Is Just Like Us In 'How To With John Wilson', 'Supernatural', 'The Mandalorian', And More! →