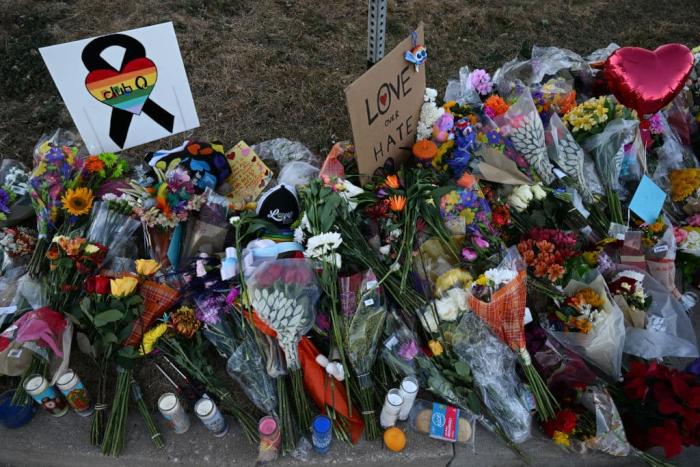 Over the weekend, Elon Musk reinstated the Twitter accounts of Donald Trump, Kanye West, Jordan Peterson, and the conservative parody outlet The Babylon Bee. Trump’s account was reinstated based on the narrow results of a Twitter user poll that Musk tweeted out. 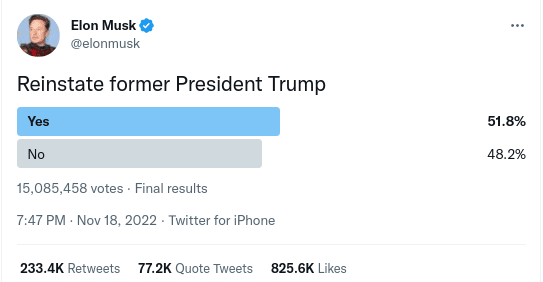 The other accounts were reinstated as part of Musk’s promise to allow more “free speech” on the ol’ Bird App. Jordan Peterson’s idea of free speech is to misgender and dead name Elliot Page. Similarly, The Babylon Bee lost their Twitter account when they continually misgendered the US assistant secretary of health, Rachel Levine. Kanye West lost his account privileges for being an unrepentant antisemite. This was his first Tweet upon returning to the platform:

While there is no hard evidence, it’s difficult not to link these events on social media to the spike in anti-LGBTQ/anti-trans and antisemitic violence that happened over the weekend.

Club Q, a popular LGBTQ nightclub in Colorado Springs, was the site of America’s most recent “mass casualty event” when a shooter opened fire on a crowd of dancers just before midnight on Saturday night. At least five people were killed and 18 injured before unarmed patrons of the club were able to stop him. In the aftermath of that shooting, Sunday’s observance of Trans Day Of Remembrance was even more somber across the country as the victims of this suspected hate crime were added to the list of all those we have lost.


While shocking and horrifying, the Club Q shooting is the almost inevitable conclusion to rising levels of hate speech and anti-trans organizing that has been going on across social media (but mostly on Twitter.) Chaya Raichik and the Libs of TikTok account are the most well organized — identifying community Pride and Drag events and then encouraging their deranged Twitter followers to shut down those events. The ceaseless posts demonizing members of the LGBTQ community as “groomers” and pedophiles fuel attacks like those in Colorado Springs while Elon Musk has put out a virtual welcome mat on Twitter’s doorstep for them. Pairing this with our inability to pass any sort of common sense gun laws on the federal level continues to leave our most vulnerable communities at risk.

.@laurenboebert you have played a major role in elevating anti-LGBT+ hate rhetoric and anti-trans lies while spending your time in Congress blocking even the most common sense gun safety laws.

You don’t get to “thoughts and prayers” your way out of this. Look inward and change. https://t.co/mxt6wFMVEv


I’m with AOC and feel comfortable laying a lot of blame here at the feet of the GOP.

On the other side of the country, in New York City, a gay bar in Hell’s Kitchen has been the site of repeated vandalism over the past week. According to the bar’s owner, the police have been reluctant to investigate at all, let alone as a hate crime.

Last night, a man threw a brick through the window at VERS while patrons were inside. This is the third time this has happened THIS WEEK! If anyone recognizes him or has any information, please let me know. pic.twitter.com/N1c8nQxiTO

Also in New York, two men were arrested at Penn Station on Saturday night as they attempted to enter the city with plans to “shoot up a synagogue” that they posted to social media on Friday. One man is from Long Island, and the other reportedly lives on the Upper West Side. When they were stopped, they had a large hunting knife and an illegal firearm with a 30-round magazine on them. The rise of antisemitic sentiment on social media continues to fuel actions of real-world hate. For better or worse, Kanye and Kyrie Irving have been influential across multiple platforms in amplifying and giving cover to hate groups. It doesn’t seem like that sort of thing bothers our new Twitter overlord in the least.

Without anyone currently at the controls for Twitter moderation, we can laugh about people posting entire movies, two-minutes at a time, in threads, but we also need to be aware that hate speech will continue to proliferate. While many of us make plans to ditch the cesspool, it has been an effective tool for activists and educators who do GOOD WORK, as well as acted as a meeting place for many marginalized communities. I’m not comfortable with abandoning Twitter to hatemongers, where they will be able to fling their shit at any person, or group, they deem “offensive.” People spreading hate, like Jordan Peterson, Chaya Raichik, The Proud Boys and their ilk should not be given the gift of an entire social media platform all to themselves. They already HAVE Truth Social and Parler. Why are we ceding ground to them on Twitter too? The more places we allow them to spread their hate - against the Jewish community, the LGBTQ and trans communities, the Black community, or anyone else - the more shootings we’ll see like the one that happened, and the one that was barely prevented, this weekend.

I don’t know how many acts of violence that can be traced back to social media it will take to make Musk understand the extent and gravity of Twitter’s reach. Maybe it’s another one of those situations where ramifications are meaningless unless/until something happens to him personally, or someone he loves, which is the only thing apparently keeping Alex Jones from being allowed back on Twitter.

This tweet explaining why he won't allow Alex Jones back is simultaneously the most human thing Elon Musk has posted here and also the biggest indictment of his view of what is 'free speech', given the others he's let back on Twitter (ie: it's what he allows to be free speech). pic.twitter.com/A0PZ3led99


← Conan O'Brien Only Misses Two Things About Boston | 'What's a Common Element From '90s or 2000s Sitcoms That Has Aged Poorly?' →