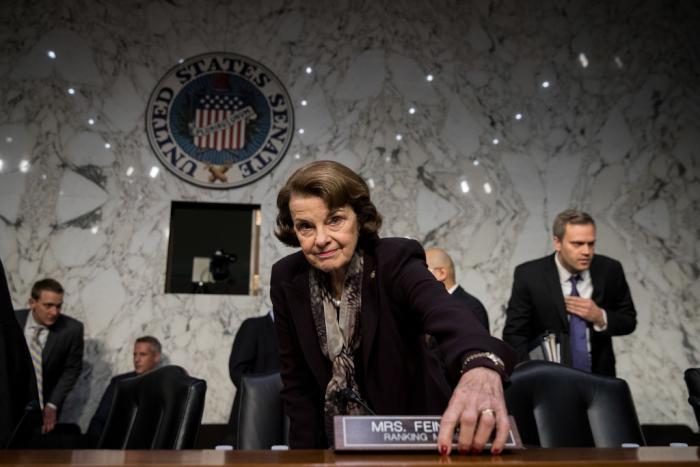 Multiple Democratic lawmakers and former staffers of Dianne Feinstein, the 88-year-old long-term Senator from California, spoke to the San Francisco Chronicle about their concerns regarding her apparent memory lapses. The conversations, which took place in February, began after one lawmaker had to reintroduce himself multiple times to Sen. Feinstein in the same conversation. They’ve known one another for 15 years.

“I have worked with her for a long time and long enough to know what she was like just a few years ago: always in command, always in charge, on top of the details, basically couldn’t resist a conversation where she was driving some bill or some idea. All of that is gone,” the lawmaker said. “She was an intellectual and political force not that long ago, and that’s why my encounter with her was so jarring. Because there was just no trace of that.”

Sen. Feinstein, who has served in the US Senate since 1992 and has sponsored numerous legislative accomplishments from environmental protections to support for veterans, firefighters, and sexual assault survivors, apparently has both good and bad days, but sources say the bad days are increasing. It’s a familiar pattern to anyone who has watched a loved one experience memory loss. Discussions begin and it seems everyone is on the same page until a sudden tangent or innocuous question reveals the inconsistencies. Sen. Feinstein’s husband Richard Blum died in February, and in a brief statement to the Chronicle declining to be interviewed, indicated the slips were due to her busy schedule and grief.

“The last year has been extremely painful and distracting for me, flying back and forth to visit my dying husband who passed just a few weeks ago,” she said. “But there’s no question I’m still serving and delivering for the people of California, and I’ll put my record up against anyone’s.”

There’s no question that Sen. Feinstein’s record speaks for itself. She is as influential a Senatorial voice as one might find and, after Vermont’s Patrick Leahy retires, will find herself third in line for the presidency should the Democrats retain a Senate majority. The problem lies not in her history but in her present and future. This is not the first time Sen. Feinstein’s alleged memory issues were raised; similar slips spurred a 2020 story from The New Yorker, after she asked Jack Dorsey the same question twice in a row, with the same wording and inflection.

It can be argued that sexism plays a role in this story, though Sen. Feinstein is not the first legislator to face memory issues in office and she won’t be the last. About 30 percent of the Senate is over the age of 70, including Chuck Grassley, Mitch McConnell, and Bernie Sanders. Nor is the Senate the only issue; Joe Biden will be 80 by the next election, and Donald Trump, who has already shown numerous signs of memory and processing issues, is in his late 70s. The Presidency at least comes with term limits, meaning Ronald Reagan’s Alzheimer’s had only a certain period of time to affect the nation; the Senate and House — with 15 members over the age of 80 — do not. Advanced age isn’t the only issue that can detrimentally affect a person’s suitability to office. JFK probably shouldn’t have worked on issues of national importance while high on meth. Sen. Feinstein losing her faculties while in a position of national authority is concerning, and I don’t think it’s disrespectful to say so when multiple Senators raise the issue. She has served California and the United States to great effect. But she’s given no indication that she intends to retire before her next election in 2024 when she will be 92. It seems entirely appropriate to ensure she — and every other Senator — are capable of doing the job.


← 'The Daily Show' Celebrates Zack Tahhan, the Syrian Immigrant Who Stopped The Subway Shooter | Reddit Asks the Question: 'What Is a Declassified Document That Is So Unbelievable It Sounds Fake? →