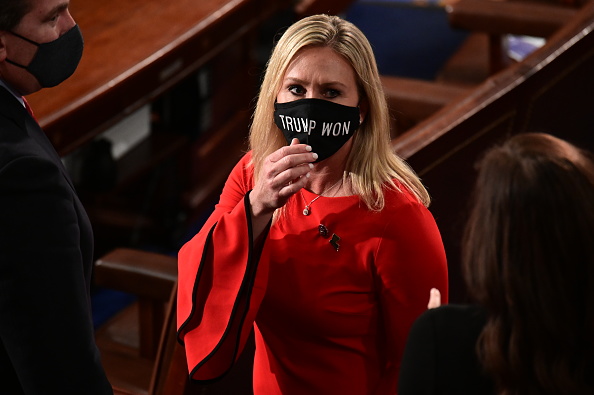 On the Education Committee?! What the Hell?!

There’s a difficult line when it comes to people like Rep. Marjorie Taylor Greene. I think it’d be easy to turn her into a daily post for hate clicks, but at what point does that just help to create the monster? Negative attention is what she wants. I mean, she’s a freshman Congressional Representative who has been in her position for less than a month, but she’s also already one of the most visible, outspoken, and omnipresent Reps in Congress. Can those of you who do not live in Georgia name another Congressional representative in the state?

There’s obviously a lot of power in that attention, but on the other hand, how can you not bring up the fact that her social media history shows that she believes that Parkland and Sandy Hook mass shootings were false flag operations that used crisis actors and that she has literally advocated executing members of Congress.

She’s a violent, dangerous extremist, and people should know that, but in covering her, we also run the risk of turning her into a bigger hero of the right, which increasingly embraces her dangerous extremism?

On the other hand: She’s a better representative of the Republican party now than Liz Cheney, who the GOP is trying to oust from her leadership position, Meanwhile, they are installing Marjorie Taylor Greene into a leadership position by placing her on the Labor and Education Committees. The Education committee? What the hell was the GOP thinking? Pelosi is 100 percent right about this.

Pelosi on Marjorie Taylor Greene: "What I'm concerned about the Republican leadership in the House who is willing to overlook and ignore those statements, assigning her to the Education Committee when she has mocked the killing of little children … it's absolutely appalling." pic.twitter.com/3ytOP4F2Qy

Pelosi on Republican leadership assigning MTG to the Education Cmte.: "You're just going to have to ask them why they thought that that raised itself to the level of something appropriate to do in the Congress of the United States."

Literally, tens of thousands of Republicans have shed their party designations since the January 6th insurrection. Seating and then rewarding people like Marjorie Taylor Greene only hastens the party’s de-evolution into a smaller but ever-increasingly dangerous political party, one that condones white supremacy and terrorism.

“House Republicans have appointed someone to this Cmte. who claimed that the killing of 20 children and six educators at Sandy Hook Elementary School was a hoax." - @haleytalbotnbc pic.twitter.com/3PrKEgNaPa

← When Will Netflix's 'Lupin' Return? | Reddit Asks the Question: 'Visitors To America, What Was Your Favourite Food Experience There?' →