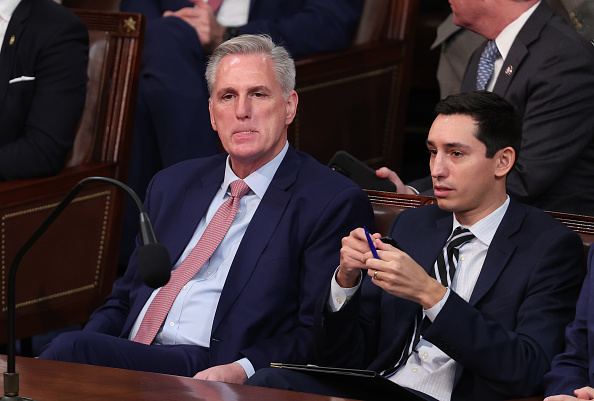 One of the more interesting aspects about the vote for Speaker of the House is who now wields the power on the Republican side: It’s the nutcases. Matt Gaetz — who has been investigated for sex trafficking and had a mysterious relationship with his “son,” Nestor — is basically running point for the rebels, who are primarily members of the Freedom Caucus, essentially created by Jim Jordan, who is actually supporting Kevin McCarthy, even though his Freedom Caucus colleagues support Jordan. Jim Jordan, recall, is nicknamed “Gym” for a reason, and if he’s elected Speaker, I can’t wait for the George Clooney doc to come out.

It’s interesting because there are 222 Republicans in Congress, and only 15 percent are election deniers. But most people wouldn’t know that because the election deniers — many of whom are in the Freedom Caucus rebelling against McCarthy — are the most outspoken members of the party. People perceived to be the lunatic fringe after their fluke elections during the Trump era — Margorie Taylor Greene, Lauren Boebert, Matt Gaetz — are now running the asylum, with Greene making a run at not only joining the establishment but becoming the establishment. It’s like if Alexandria Ocasio-Cortez became Nancy Pelosi’s biggest cheerleader while attacking Ayanna Pressley for supporting Cori Bush as Speaker.

Democrats are loving the humiliation that McCarthy is enduring, humiliation that may eventually lead to the selection of another Republican as Speaker. But is that what Democrats want? McCarthy is a California Republican, a soulless politician who was actually in line for Speaker before Paul Ryan but was skipped over in 2015 because he’s seen as a spineless, backstabbing weasel. McCarthy even once held his finger up to the wind and contemplated asking Trump to resign after January 6th, but he has since given up what’s left of his soul in his latest attempt to be elected Speaker.

However, even if the GOP ultimately selects him, he’d be — at best — a weak, feckless Speaker who I suspect wouldn’t survive his first term. The Freedom Caucus would boot him in a vote of no confidence (a procedure that the Freedom Caucus has already extracted from McCarthy), and isn’t that the kind of chaos the Democrats want? The closer to the 2024 election, the better? Because these people controlling the party — the minority of the GOP — are the very same Trump hardliners that cost the Republicans in the midterms.

I think the best thing for the Democrats is for McCarthy to go through the humiliation of six or seven ballots but ultimately be selected as Speaker, because a weak, ineffective GOP Speaker is a boon for the Democrats. The only other realistic option is Steve Scalise, currently the number two Republican, whom the Freedom Caucus has suggested they’d vote for. I suspect that he’d be a more effective GOP Speaker, which is all the more reason McCarthy should win.

Voting will begin again shortly. May Kevin McCarthy suffer another day’s worth of ritual humiliation.


← Is Anyone More Charming Than Michelle Obama? | The 'Evil Dead Rise' Trailer Will Mess You Up in All the Best Ways →