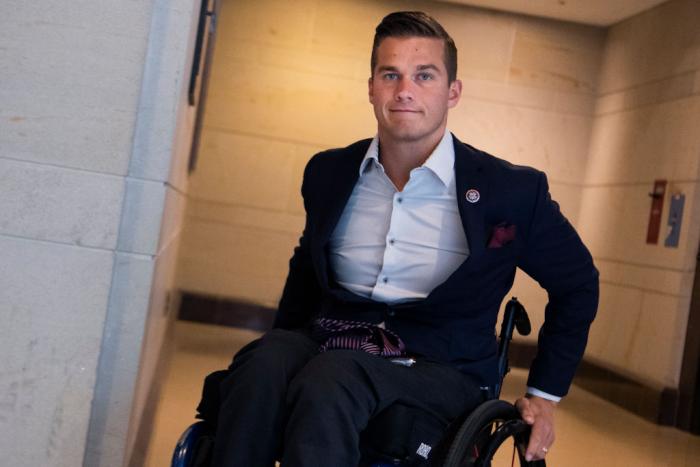 I appreciate Madison Cawthorn. I really do. The man is amazing. Not as a Congressman; I’m as qualified a brain surgeon as he is a legislator. But Cawthorn is second to none when it comes to tripping over his own feet. There are the sexual assault allegations. The fascination with Hitler. The constant lies. The swift divorce after harping on the sanctity of marriage. The last time we checked in, Cawthorn was running his mouth about Congressional cocaine-fueled orgies, an admission that no doubt removed him from the invite list. It led to House Minority Leader Kevin McCarthy telling reporters that Cawthorn had “lost his trust” — imagine trusting Madison Cawthorn in the first place — and that the junior Congressman needed to earn it back. How’s that going?

Not great. As you can see, last weekend Politico obtained photos of a cross-dressing Cawthorn partying it up in an ironic callback to his own statements about “the sexual perversion” of Washington and the Left in general. Cawthorn ran on and frequently rants about the deplorable state of modern masculinity and how soft today’s men are in comparison to previous generations. He hasn’t commented on how soft those lady’s undergarments are, but he did tweet a lame excuse.

I guess the left thinks goofy vacation photos during a game on a cruise (taken waaay before I ran for Congress) is going to somehow hurt me?

They're running out of things to throw at me…

Share your most embarrassing vacay pics in the replies🤦‍♂️https://t.co/YicRk0Albu

To be clear, Madison’s sartorial choices aren’t a concern, though his constant demonization of the LGBTQ community for similar behavior is. They probably didn’t earn back McCarthy’s trust, though. GOP leaders from his state are backing a primary challenger to the Seat, due to his behavior and, worse, bad publicity. It’s entirely possible someone on the Right orchestrated the photos’ release.

Then, yesterday, Cawthorn was cited for bringing a loaded 9mm handgun into Charlotte Douglas International Airport. The gun was confiscated and Cawthorn released, which CMPD stated is their standard operating procedure. I have my doubts about that. Regardless, it’s not his first time pulling this same stupid stunt. In July of last year, he was cited for attempting to board a plane with a different 9mm handgun at Asheville Regional Airport. That was after he claimed that he was armed in the Capitol during the Jan. 6 insurrection. He’s also due in court next month to face charges of driving with a revoked license stemming from a March 3, 2022 traffic stop after Highway Patrol spotted him veering into the oncoming lane. That’s on top of two pending citations for driving approximately 20mph over the speed limit and is the second time Cawthorn’s been charged with driving with a revoked license. Oh, and he’s also been implicated in a possible insider trading scheme involving cryptocurrency, because of course he has. NFTs have yet to make an appearance but it’s only a matter of time.

So I appreciate Madison Cawthorn, and you should too. However bad you’ve messed up in the recent past, odds are good he’s done worse, and in public at that. Whether he’ll face consequences for his actions remains to be seen, although his Congressional days seem numbered if only because Kevin McCarthy is tired of all the bad press and Cawthorn makes a handy scapegoat for the party’s larger issues. There’s little to no chance whoever replaces him will be better at the job, but if nothing else they’ll be more circumspect about it.


← Elon Musk Is Not Very Bright | Alex + Jack = The Greatest, Most Awkward Looking Bromance In History →