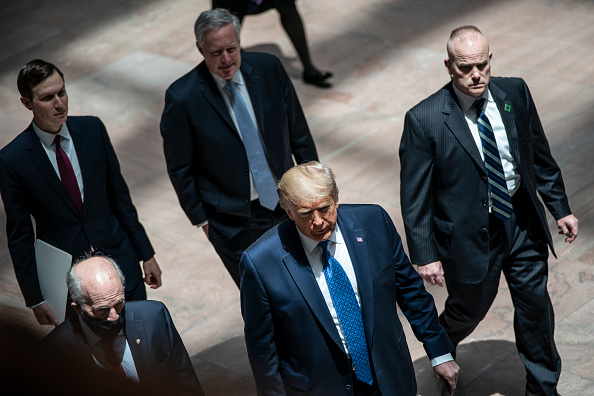 It’s been nearly a year now since the January 6th insurrection, and while a number of people involved in the Capitol riot have been convicted and imprisoned, charges have not yet been brought against Donald Trump or anyone within the Administration or the Trump campaign. For Democrats, time is running out. If the Democrats lose the midterms, as they are expected to do, they will lose subpoena power.

There are a number of criminal cases mounting against Donald Trump. In New York, AG Letitia James has opened a criminal inquiry into Trump and his business practices; the Manhattan district attorney’s office is also circling Trump and his inner circle over tax-related crimes; SCOTUS allowed a New York City prosecutor access to his taxes; and in Atlanta, Georgia, there’s supposedly a grand jury being convened to look into Trump’s attempts to compel the Secretary of State to “find” the additional votes he needed to win the state. As part of its January 6th inquiry, Congress is also amassing more evidence of Trump’s attempt to overthrow the government.

Despite all of this, Donald Trump is … planning a 2024 campaign to take back the White House. He also still has complete control over the Republican party, and I have to believe that at least a few of those Republicans are secretly hoping that Trump is indicted, convicted, and imprisoned for something.

More recently, former Trump White House chief of staff Mark Meadows — who continues to defy a subpoena to testify in front of the January 6th committee — nevertheless turned over documents containing an actual PowerPoint presentation in his possession that outlined the Administration’s plan to stage a coup and reinstall Trump into the White House. This is a 38-page document that literally outlines plans to overthrow the government, and yet, Trump continues to hold events (in half-empty arenas) to prime himself for another run at the Presidency.

This PowerPoint presentation was not screwing around, either. The plan, according to The Guardian, was to “declare a national emergency, declare all electronic voting invalid, and ask Congress to agree on a constitutionally acceptable remedy.” At that point — and this is why Trump is so furious with Pence — the plan was to execute one of three options: Seat Trump’s electors in states like George, Pennsylvania, and Arizona over the objection of Democrats; delay the certification to allow for “vetting” of the votes; and/or count only the “legal paper ballots.”

The document, titled "Election Fraud, Foreign Interference & Options for JAN 6," opens with a crazy conspiracy theory aimed at basically disenfranchising anyone who voted by mail.

Recall that Trump spent much of 2020 preemptively conspiracy-mongering about mail voting. pic.twitter.com/5KKNXJ2zFH

They were going to argue that the Chinese had hacked into our voting machines, and therefore all electronic votes were void. Meadows also told those planning the January 6th riot that the National Guard would protect pro-Trump forces (and as we know, the National Guard was slow to respond to calls for help from the Capitol police).

I’m not a far-left conspiracy theorist. I am not a “lock him up” kind of person. I am not Judd Legum or even Rachel Maddow. But, y’all: Donald Trump should be in prison. They tried to put Hillary Clinton in prison over emails. Meanwhile, Donald Trump tried to overthrow the government, got several people killed, and nearly had his own Vice President hung in the halls of Congress, and he’s hanging out in what he still calls the Winter White House and is poised to run for re-election in three years.

If you don’t put these people in prison, they’re gonna win the midterms, and then steal the 2024 election, whether Trump wins or not. Then they will imprison Joe Biden and Kamala Harris, and anyone who threatens their power. Trump will become our Putin, and a substantial minority of our country will say, “Yes, and thank you.” I am not an alarmist person, but a Congressman accused of sex trafficking is basically threatening to seize power and install wackos. There’s a decent chance that, a year from now, that person is going to have more subpoena power in the House than Nancy Pelosi.

The Democrats are clinging to power right now, and they are running out of time to save what’s left of our country’s democracy.

Well, fuck these treasonous assholes! This sounds like THEY RAN A WHOLE VIOLENT COUP D'ETAT OUT OF THE WHITE HOUSE WITH A NATIONAL NETWORK OF TRAITORS so it sounds like a galactic fuckton of prison is the only remedy.
</> pic.twitter.com/6D9ZNlHHgc