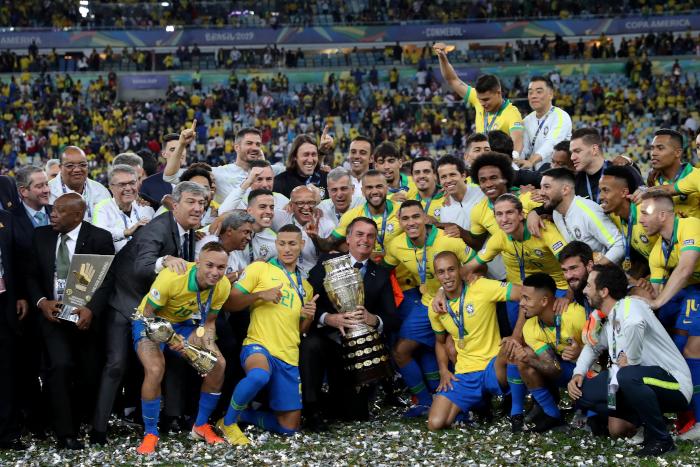 So, you are the authoritarian president of a major global power beset by troubles. Not just your country’s problems, but the problems that directly affect you, because of course that’s where your concern horizon begins and ends. Let’s say you were already known for being a rabidly racist, sexist, homophobic, fascist who has other countries’ dictators on his vision board. Let’s say you aped your presidential campaign and policies on Trump’s just to see his presidency collapse. As a matter of fact, you were elected right around the time his administration’s power began being culled . Let’s fast-forward to 2020 and let’s say your handling of the pandemic was so catastrophic, so deliberately callous that it is deliberately genocidal. Let’s say that you’ve been implicated in one corruption scandal after another, including VERY close links to the murderers of a renowned left-wing social activist, ALLEGEDLY. Let’s say, to top it all off, that there were massive protests against you during the weekend and that your main political rival has been cleared of some trumped up corruption charges, being now free to challenge you in next year’s general election. Things are not looking great for you; how could you possibly get out of this?

Now let’s imagine you are the president of a Continental Football Confederation, and say you’re the president of South America’s Football Confederation (or CONMEBOL), and in your position, you oversee the international tournaments on the continent that made football what it is today. Of course, that responsibility entails you to benefit from corruption so blatant it’s almost transparent. Imagine you were chosen five years ago because literally everyone else who could vie for that position was either being indicted or had the FBI requesting them for extradition. In the South American context, that means he’s a crook but much smarter at it. Now let’s say you are in charge of organizing this year’s Copa America, the continental men’s football championship, which was supposed to be held last year in both Colombia and Argentina, and was postponed, obviously, to 2021. Now let’s say those plans had to be scrapped too because of the ongoing social uprising in Colombia and a horrible new wave of Covid-19 in Argentina, because incompetence and corruption in the handling of the pandemic is not exclusive to far-right governments, it’s just that the latter all have the “incompetence” part as plausible deniability. So let’s say you are about to miss again that cash cow that is the Copa América and you’ll be damned if you just cancel everything and wait for 2024. Literally, there are so many shady figures at CONMEBOL counting on those cheques that failing to deliver might put you at risk of a whooping.

Well, it seems that both these presidents just matched on crook Tinder, because CONMEBOL decided to host Copa America in Brazil. Brazil, which is still suffering through the worst of whatever wave this is, averaging over 2,000 deaths a day last week alone. Did I mention this is supposed to kick off in two weeks’ time?

Of course, the president of CONMEBOL wasted no time trying to push this catastrophic idea while kissing Bolsonaro’s ass Lindsey Graham style:

He also makes a point of reminding us that Copa America is the oldest international football championship in the world, because I guess he’s trying to coax us into thinking he is saving the legacy or something. In the following tweet, he says “A championship that will rock the Continent is afoot!”, with all the energy of a divorced dad trying to take his teenaged children camping:

This news cycle is far from over. Not unlike the comical rise and fiasco of the European Super League, the backlash has been swift and now the Brazilian Football Federation has begun to backpedal on the entire thing. Probably by Tuesday today we will know if this goes anywhere. Some Brazilian states have outright refused to participate:

So far the Copa America breakdown in Brazil is like this:
- Rio Grande do Sul, Rio Grande do Norte & Pernambuco won't allow it.
- Sao Paulo, Amazonas & Bahía: 'meh, come here if you have to'
- Mato Grosso has actually asked for games, presumably to remind people it's a state.

By the time I was correcting this piece, the Brazilian Government started distancing itself from Bolsonaro:

Just to catch up on what’s happened:

-Conmebol spoke with Jair Bolsonaro for Brazil to host #CopaAmérica, they agreed
-Brazilian government doesn’t agree
-Many states do not want to host matches
-CBF doesn’t have an official proposal
-No approved sanitary protocol

Of course, all of this is can be explained because Bolsonaro wants a distraction from the avalanche of sh*t towering over him. If you think I’m jumping to conclusions when I say that Bolsonaro’s government offered the country and put down some bribes to bring the championship home (having won at home in 2019), the answer is no; corruption is always the answer when it comes to South American football. CONMEBOL was exactly the kind of morally bankrupt organization that would gleefully jump onto that chance. Just as we recently discovered yet another proof that the NFL is founded on being racist and callous towards its own players, CONMEBOL yelled “amateurs” and gave a fascist proto-dictator clout in exchange for cash. Who cares if only 6 of the 10 national teams have been vaccinated, not to mention most South American fans, who I really hope are much too broke right now to travel to Brazil.

But perhaps, unfortunately for Mr. Bolsonaro, he might have just chosen the one time in South American history when we are putting a pause on our devotion to football.