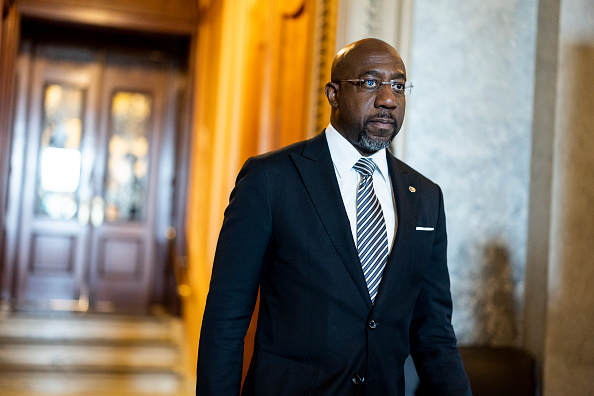 Biden Supports Abolishing the Filibuster to Codify Roe; Is That Even Possible This November?

Over forty years ago, a bunch of white men got together and decided that they didn’t like the direction our country was heading in after a brief decade where the Supreme Court actually advanced racial and gender equality (God bless the Brennan Court). They formed The Federalist Society, and they made it their single-minded mission to overturn Roe v. Wade so that they could reassert control over women’s bodies and ensure that white babies weren’t outnumbered by newly arrived immigrants.

It took them four decades, but they succeeded in doing an end-run around the Constitution and overturning Roe, thereby forcing women in large swaths of the country into having unwanted births. The good news is: We can undo 40 years of their work in six months. The bad news is: It will be very difficult.

That’s going to be a hell of a challenge. The good news is, the post-Roe climate in America is shifting back toward Democrats (and if Biden can tame inflation and if gas prices drop, the climate would tilt further in the Democrats’ favor). For what it’s worth, the first post-Roe generic ballot puts the Democrats up by 7 points.

Democrats lead Republicans on the congressional generic ballot by 7 points among registered voters, 48%-41%

The generic ballot doesn’t mean that much because it doesn’t account for gerrymandering and voter suppression, but it at least suggests that the electorate is moving in the right direction. The House will be very difficult to hang on to simply because sitting Presidents always lose badly in their first midterms. Overturning Roe might reverse that trend.

Assuming it does — and that’s a big assumption — we need 52 Democratic Senators. Right now, polls suggest that the Democrats will cruise to 47 seats and the Republicans will cruise on to 48, roughly. There are 5 toss-ups. The Democrats will need to win all five not just to hang on to the Senate, but to gain enough votes to end the filibuster. Where are those five toss-ups?

Arizona: Incumbent Mark Kelly is the presumptive Democratic nominee. The primary is not until August. The Trump-backed candidate, Blake Masters, has pulled ahead in the polls, which is good for Democrats because Mark Kelly is favored to clobber Blake Masters in the general. It’s less promising if one of the more moderate Republicans wins the nomination, so let’s weirdly hope that the Trump-backed candidate wins the GOP primary.

Georgia: Here, Raphael Warnock is the Democratic incumbent taking on the Trump-backed Hershel Walker. A poll out today puts Warnock up by 10 points (and Stacy Abrams in a dead heat with Governor Kemp).

Nevada: It’s a toss-up, but even before Roe was overturned, the incumbent Democrat Catherine Cortez Mast had a 4.3 percent polling lead over Adam Laxalt, according to FiveThirtyEight, for whatever that is worth.

Pennsylvania — In the Senate race to replace retiring Pat Toomey, Pennsylvania Lt. Gov. John Fetterman is leading Republican Mehmet Oz by 6 points. Again, this was before Roe was overturned. Assuming that Fetterman stays healthy, I think he can win this.

Wisconsin — This is the toughest of the toss-ups for Democrats to win, especially going against Biden’s unfavorables. The primary hasn’t happened yet, but Mandela Barnes is leading in the polls for the Democrats. If he wins, he’ll take on Ron Johnson, where polls have given him a very slight edge. However, Ron Johnson is currently embroiled in another scandal in which he is implicated in attempting to fraudulently replace a Democratic slate of electors with a Republican slate in order to overturn the 2020 Presidential election. That might help Barnes even more.

So, in the five toss-ups, the Democrats currently have a slight edge, and that is according to polling before Roe was overturned, and before Cassidy Hutchinson’s Jan. 6th hearing testimony. If the economic climate shifts back toward Democrats ahead of the midterms, there’s a real chance to not only hang on to the Senate but grab enough seats to overturn the filibuster.

The House, however, is another question. So, please vote in November. Democracy is not dead yet! And if voting doesn’t work, then maybe we burn it all down!


← Are You Ready For 'The Stranger Things' Finale? | Stephen Colbert Flips The SCOTUS Football Decision On Its Head →