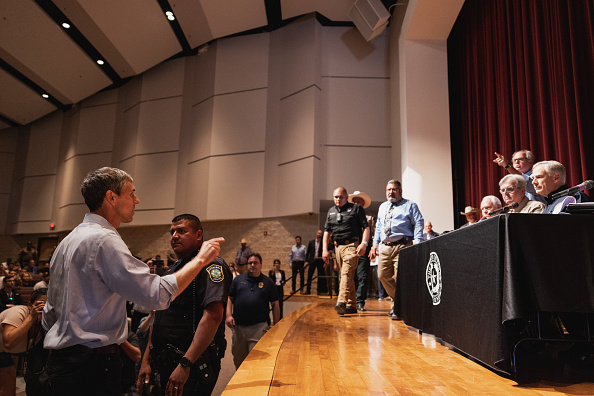 I don’t know if this will work, but at least you can honestly say that Beto O’Rourke is trying. O’Rourke — who is running for Governor in Texas — is attempting to stand up to a group of good old boys, powerful old white Texas men in literal cowboy hats who try to shout down O’Rourke for daring to question the Texas establishment while Redneck Yosemite Sam screams, “You’re out of line.”

“You are doing nothing!” O’Rourke tells them, and he is not wrong.

I can’t imagine what it’s like being a Texan today, looking up at that wall of men in power who will band together and patronize, shame, and remove anyone who doesn’t agree with the policies they have implemented that have allowed all of this violence to flourish. I can’t help but think of the victims of abuse we wrote about earlier who tried reporting their assaults to the church authorities but were shamed, dismissed, and told they were doing the devil’s work. These are the same kinds of men playing from the exact same playbook. Whether it’s violence, sexual abuse, or a woman’s rights over her own body, you simply aren’t allowed to question the “wisdom” of old white yokels straight out of a Footloose church scene who think they know better than the rest of America.

This is incredible to watch. Just everything.

We could use a few (thousand) more like Beto right now.

Beto making my point about Medicaid expansion after being ejected from the press conference: pic.twitter.com/wOqGMqtmbw


← 'This Is Us' Delivers a Remarkable, Low-Key Series Finale | 'A Chiara' Isn't Your Typical Mafia Film →