What Is This? Bari Weiss Starts a 'University'

Hello, parents and prospective college students! Are you sick and tired of Big Government shoving actual science and education down your throats? Are you fed up with reality having a liberal bias? Do you wish higher education was more about discussing truly challenging ideas free of the fear that you might get roasted on social media by a socialist with a big tiddy anime pic? Do you long for the day when someone would stop laughing at you for signing that embarrassing Harper’s letter?

From Bari Weiss, former New York Times opinion writer and right-wing apologist, known in these parts for generally lowering our view of the NYT, being that kind of white woman, and being Kate McKinnon’s ex-girlfriend, comes the answer to these problems.

Introducing The University of Austin! 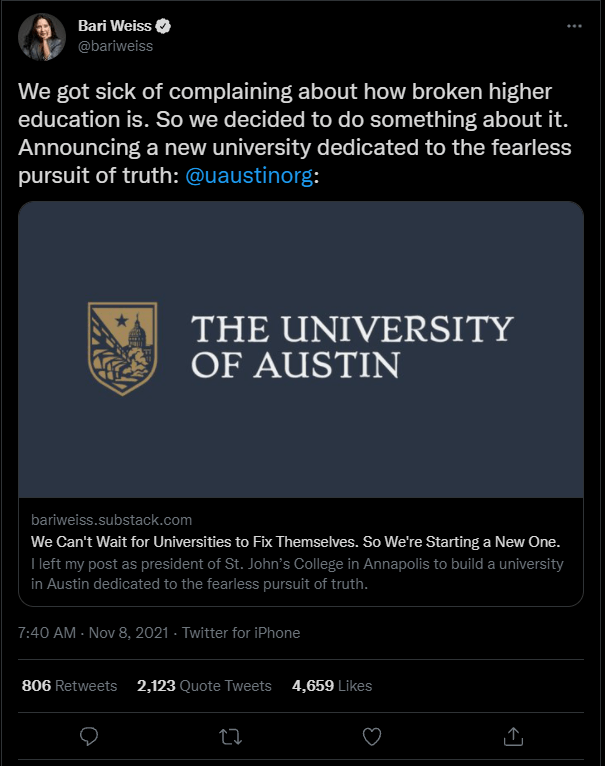 What’s that? There is already a University of Texas AT Austin? Home of the Texas Longhorns? And that naming another school in the same city like that feels ironic considering how the whole “Meta” thing is going? Well, um…

That’s totally different! This school doesn’t truck in the leftist indoctrination others school do! They will teach the TRUTH, no matter how RADICAL or CENSORED it may be. Not actual censored like anti-racism and LGBTQIA books targeted by Texas House Bill 3979, but the kind of “censored” where any criticism or contradictory evidence counts as “censorship”! They just want to create a “space” where they can be “safe” to discuss the subjects they can’t anywhere else (because they probably got fired or quit due to repeated protests). Look, there’s a quote from Frederick Douglass to convey how IMPORTANT they are!

They even (promise to) offer what they call “Forbidden Courses” which, much like “dark academia”, sounds like the curriculum the Ghostbusters were trying to teach before getting kicked out of their school.

But you know how it is. You think you’re going to have courses like “Bio 305: Human Sacrifice and You” or “Religious Studies 450: Chthonic Summoning, and Why You Shouldn’t”, only to end up with courses more like:

-Computer Science 305: The ‘Intellectual Dark Web’ Is Totally Cool And YOU’RE The Dork, Mom
-Poli Sci 101: No, YOU’RE Being Antisemitic: How to win online ‘debates’ with the SJWs
-Bio 100: The Kid From Kindergarten Cop Is All The Sex Education You Need

Now, you might hear some naysayers going and on about how “this seems sketchy as hell” and how “it looks like one of the many, many schools that preyed on the constant trumpeting of college degrees solving all of life’s problems and later got sued by current and former students for not actually providing the education they paid for.”

To that I say, does THIS look like a scam to you?

I admit that I am not familiar with the ins and outs of starting and running a university. So I had my doubts. It just seemed like it was pretty difficult to start and run a four-year school like this. At least until I saw their timeline that totally does NOT look like it was cribbed from the paid Season Pass roadmap for a AAA video game that exists to convince people that it totally wasn’t rushed out of the door incomplete and won’t go under barely a year out.

But in order to fulfill those goals, they need support from fellow freethinkers, like maybe even YOU! Yes, you can become a “founder” if you are so inclined (and also have thousands of dollars to spend)! 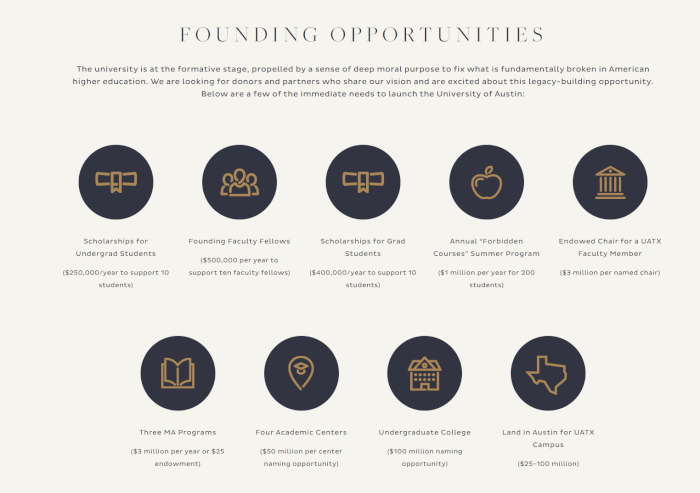 Along with Weiss, you have the opportunity to join a murderer’s row of educators and thought leaders, including… David Mamet?

I mean, when you think about it, it isn’t really that shocking.

But don’t worry, you don’t have to relocate to Texas (God forbid!) to do this! Take it from Dr. Kathleen Stock, UoA founder, trustee, world-renowned TERF academic TERD*: 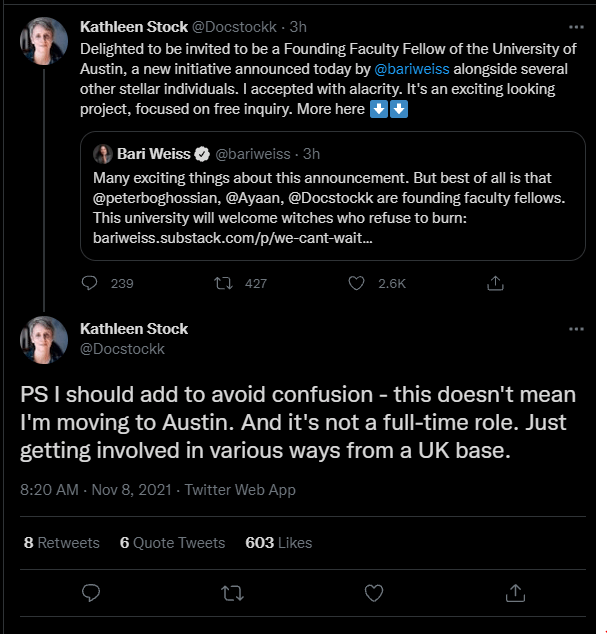 Unfortunately, the SJW cesspool that is Twitter has discovered this and “cancel culture” (aka ruthless mocking) is trying to take down this soon-to-be august institution:

lol this is an actual screenshot of an actual FAQ on the new Bari Weiss university website pic.twitter.com/lD3CoilrZ9

Very excited to have been asked to join the University of Austin as supervising head of its fledgling Film Studies department. Currently preparing modules including "Was the 80s the best decade for film? Yes", "Woody Allen: 1990 to present" and "Blacking Up: Did It Even Happen?"

The first two stories I see when I log into Twitter is that Covid death in Trump counties is getting even worse and Bari Weiss is starting a university so people who are wrong have a safe space.

I am proud to announce that I, along with Bari Weiss, Conceptual James, and Bret Weinstein am joining the board of a new school: Thiel University. It's on a floating city in international waters, far from the watchful eye of woke American law enforcement.

ME[ashamed]: p-p-professor Weiss..
BARI WEISS: yes? You can tell me anything. This is Free Speech University
ME: well, my last school .. never taught us math
WEISS: no problem!
*begins putting on headdress*
WEISS: lesson 1, sine, cosine, and tangent
*opens tin of shoe polish*


But you don’t have to take their word for it! I think The Bard put it best:

*While writing this, I did check to see if I should use “a university ” or “an university.” I actually had it right! The “u” is pronounced with a consonant sound (“yew”), which means it doesn’t count as a vowel for the “a/an” rule. Maybe I should start my own university!