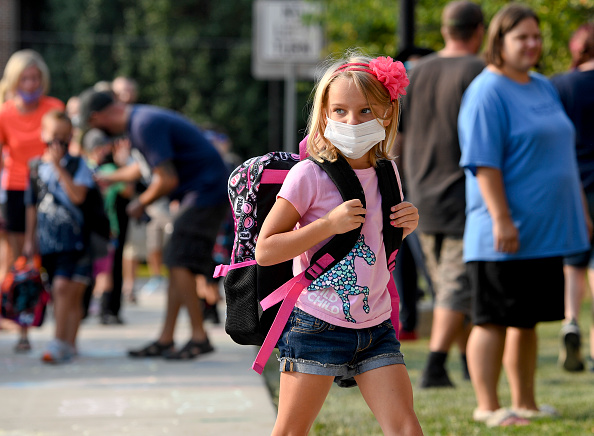 As Infection Rates Rise Again, Parents May Have to Choose Between Showers and Disease-Free Kids

Things are not going well in the world of the pandemic again. The former director of the CDC is suggesting that we could see an average of 200,000 a day again within six weeks if we follow the same trajectory as the UK, which is both good and bad. In the UK, thanks to the Delta variant, cases spiked back up nearly to January levels two weeks ago, but because the older and most vulnerable had been vaccinated, deaths never spiked, and the case numbers are quickly heading back down again now (they are roughly half of what they were two weeks ago). I guess that means that the Delta variant comes in hot and burns out quicker?

Things are different in the U.S., of course, because vaccination levels vary around the country, so the Delta variant is taking hold in some states far more than others. Check out, for instance, Louisianna, which leads the nation in new infections (and has only a 37 percent vaccination rate). Things are basically back where they were in January:

We’re seeing similar peaks all over the South, while in states where there’s a higher vaccination rate, we’re seeing much smaller rises. Here’s California, which has an infection rate that falls somewhere around the middle for the United States.

Of course, it’s in states where vaccination rates are the highest that mask mandates are being put back into effect (or being considered) and vaccinations are started to be mandated in some areas like health care and federal employees, which is great for us, but no help at all in the freedom-and-disease-loving South.

Meanwhile, as the Times reports this morning, there is a growing resentment among the vaccinated for the unvaccinated, who selfishly continue to endanger the rest of the country. Those who are expressing resentment are also coming up with novel ways in which to encourage vaccinations, like one health care worker — who is tired of patients endangering the life of her and her family — thought that insurance companies should compel vaccinations, which seems like a win-win, right, because insurance companies would have to pay for fewer illnesses. I suppose if insurance doesn’t pay, however, someone (taxpayers) ultimately will, and such a regulation would obviously end up hurting the marginalized the most. Others suggest withholding federal funding from states that do not meet vaccination targets, but that would ultimately hurt all those who did get vaccinated as much as the unvaccinated and generate even more resentment and animosity. Goddamnit.

What we don’t want is to force everyone back inside, because as the Times also reports, that is not good for mostly parents, who have to provide more childcare, do more housework (because our goddamn kids are at home and refuse to clean up after themselves. How hard is it to put your goddamn dishes in the dishwasher?), and also somehow work even more. You know what that means? Less time for showering! Look at this: All age groups spent less time on grooming during the pandemic than the year before, except for 15-24 year-olds, and we know what you’re doing in the shower, buddy (and it’s fine and perfectly natural, but also, just put your dishes away. COME ON!) 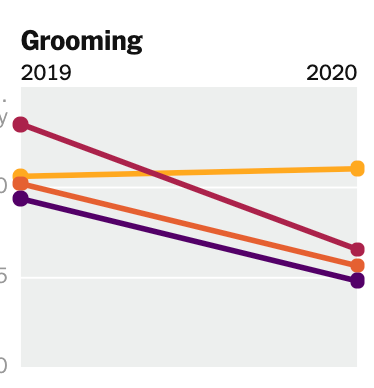 School starts again in a month. Have fun, parents of elementary school kids, deciding whether you want to home-school your kids while beating your head against the wall repeatedly because they leave socks lying around the house or send them into schools with higher infection rates where social distancing will no longer be required and asshole kids refuse to wear their masks over their noses because their dad keeps telling them to exercise their First Amendment rights to spread their germs all over the goddamn classroom.