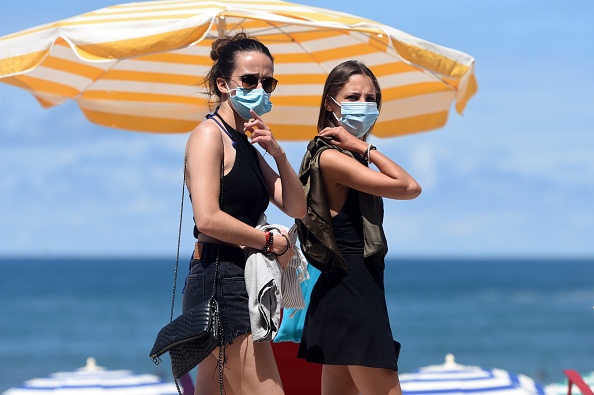 Are We Being Too Cautious?

For those who aren’t clear about the CDC guidelines these days, here’s a reminder: Masks are not required for fully vaccinated people outdoors except when attending crowded outdoor activities like concerts, parades, and sports events.

I mention this because here in Portland, Maine, a very progressive city, I went to our Eastern Promenade — a giant park overlooking the ocean with food trucks and a playground — over the weekend with the kids, and everyone was wearing a mask. Everyone. It’s not a particularly crowded area; there’s plenty of space to spread out, and everyone kept their distance. Moreover, most friend groups sat in circles together with masks around their chins while they ate.

I will also guess that the majority of the people on the prom had at least one vaccination shot, if not their second. Maine has the second-highest rate of vaccination in the country, and in Portland, it’s even higher (probably 60 percent among adults by now).

A lot of people didn’t have to wear masks, according to the CDC, but at least when they were walking around the prom, they all did. I won’t lie: I appreciated it. It was comforting, and I felt relaxed, even though those masks were probably unnecessary for most of them. But, you know: Infection rates are still relatively high, and it’s largely among those under the age of 30, many of whom are school-aged children, like my own, who could take it back to their school and shut down classrooms. Is there a high probability of that in an outdoor setting where many/most of the adults have had at least one vaccination shot? Probably not. On the other hand, is it really all that inconvenient to wear a piece of fabric around our nose and mouth if not to prevent the spread of infection then to provide peace of mind to everyone else at the prom?

I mention all of this because there was a piece yesterday on The Atlantic about “liberals who can’t quit lockdown,” and it’s about how a lot of progressives are being hypervigilant to the point of ignoring science ourselves.

Vigilance can have unintended consequences when it imposes on other people’s lives. Even as scientific knowledge of COVID-19 has increased, some progressives have continued to embrace policies and behaviors that aren’t supported by evidence, such as banning access to playgrounds, closing beaches, and refusing to reopen schools for in-person learning.

“Those who are vaccinated on the left seem to think overcaution now is the way to go, which is making people on the right question the effectiveness of the vaccines,” Gandhi told me. Public figures and policy makers who try to dictate others’ behavior without any scientific justification for doing so erode trust in public health and make people less willing to take useful precautions. The marginal gains of staying shut down might not justify the potential backlash.

Moving ahead, as more and more people are vaccinated — as we are vaccinated — we’re going to have to grapple with how to behave in public. The reality is, a lot of people are wearing masks outside out of an abundance of caution, to provide peace of mind to others, and also because, particularly in progressive areas, they don’t want to get eye daggers from others in the public. Those eye daggers are real, y’all. In progressive urban areas, there’s definitely some collective peer pressure to continue to wear masks outside, even as those requirements have been lifted by the CDC because they’re no longer scientifically necessary.

Again, I’m OK with it, and until kids are fully vaccinated, I expect most people in my city will continue to wear masks. It’s just kind of a habit now. Often when I’m at home, I won’t even realize for hours that I’ve got one under my chin. It’s not because we’re deranged, mentally ill child abusers, as Tucker Carlson suggests. And it’s not because we’re still terrified of being infected, although some definitely still are. I think the motivation to wear masks for a lot of us at the outset was to protect those around us, and that instinct has not necessarily left us, and it may not leave for weeks or months or longer. Are we being overly cautious? Maybe! Is it better than the alternative, which is basically, “F**k it. If my time has come, my time has come, and I ain’t gonna wear no masks and I ain’t gonna get no shot, and there ain’t nothing no one can do about it!” Yes, yes it is.

But we really should cool it on the eye daggers.


← Andrew Garfield 'Denies' He Has Cameo in 'Spider-Man: Far From Home' | 'The Daily Show' Dunks On Ted Cruz For 9 Straight Minutes →