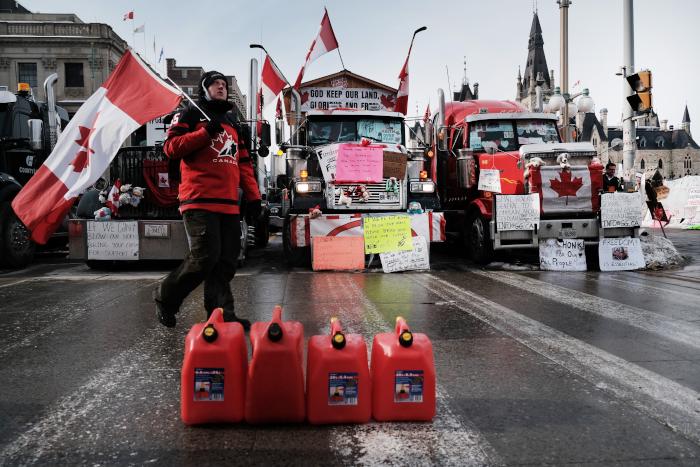 Anti-Vaxx Truckers Blocking Canada and The GOP Euphemizing Away a Coup: We've Seen This Playbook Before

My favorite song right now is “Santé,” by Belgian master Stromae, a celebration of essential workers in the times of the pandemic. However, there are two words in its lyrics that I sing between gritted teeth: While listing a number of professions, he includes truck drivers. Of course, 80% of them are kind, hardworking people. Unless you live in Chile, but I’ll get to that in a moment because a loud and asshoholic minority of truckers up north have been causing a ruckus.

How much space a truck takes

Newsflash: Trucks are big. 18-wheelers are huge, noisy, cumbersome and, if possible, should drive within a city only on a designated timetable or on specific routes. Can imagine the amount of chaos a few thousand trucks could bring if they were to all cram a mid-size city like Ottawa?

The short: Trudeau’s government implemented federal vaccine mandates for the transportation sector. For unvaccinated truckers, this means a two-week quarantine and negative covid tests after driving across the border. An annoyance that could easily be worked through by getting the damn vaccine. But as with so many industries dominated by men, a fringe group of entitled truckers started a caravan going from British Columbia to Ottawa to protest the mandates.

The caravan of deathmongers managed to make its way into downtown Ottawa two weeks ago, against… zero police presence, and they remain there, blaring their horns and blocking avenues in a way that is well coordinated. Suspiciously well-coordinated. “Helped-by-former-Canadian-police-and-military” well-coordinated. It’s almost like the vaccine mandates were an (invalid) excuse to attack all health mandates and destabilize Justin Trudeau’s government in the midst of winter with supply lines everywhere strained. Unsurprisingly, Canada’s right-wingers are jumping on these assholes’clout with mixed results.

As you might imagine, all these truckers are far-right. The caravan was decked to the halls with hateful imagery, such as Confederate flags, nazi flags being used in earnest and nazi symbols being used to label the Liberal government. PressProgress has done an amazing job checking the backgrounds of the protesters and organizers and showing how dangerous their intentions are, including people with a track-record of harassing climate protesters and union-busting.

This movement has all the markings of far-right astroturfing: Lots of funding coming from the USA, support and hyped from the former guy’s children, Elon Musk and the alt-right’s Twitter propaganda (just search “Ottawa” and you’ll be flooded with anti-vaxxers’ posts), bringing their kids along as human shields, a spike in hate crimes and harassment of people of color, not to mention anyone wearing a mask. They have been disowned by the largest trucker’s union in Canada, Ottawan’s and Canadians do not support them and many of their employers have denounced them (most of these trucks are owner-operated, but carry the logos of the companies they provide to whom they provide service). Did I mention they defaced a monument to Terry Fox, an iconic Cancer awareness activist? Or that nearly a majority of truckers are immigrants, usually of South Asian origin and yet you can’t barely find a single non-white person among the protesters.

There is an art to the euphemist. A scummy, lowlife art, but it requires some skill. It’s all about distancing the signifier as much as possible from the brutal truth of the signified with just enough plausible deniability to claim you’re not denying that reality. Coming up with a euphemism is all about imprisoning truth within the non-spaces of language without the possibility of parole. The problem with euphemisms is that imprisonment can only help you hide the bodies for so long, and at some point, some system of truth will eventually reveal what you’re hiding, and the euphemism itself will become as forceful as the straight language. Think “enhanced interrogation techniques.”

Or you can be one of the low-effort, zero effort f**kwads in the GOP and claim that the failed coup of January 6th, 2021 was “legitimate political discourse”. That’s not trying, that’s just saying the silent part out lout. That’s officializing authoritarianism in your platform. Saying a coup is “legitimate political discourse” is exactly the kind of concept that bridges the small gap separating denialism and endorsement, which is why it doesn’t work as a euphemism.

But this and trucker’s blocking Canada is something we’ve seen before. If it wasn’t because both straddle the line between organized conspiracy and chaotic evil, you could almost call it a playbook.

Many things brought about the downfall of Salvador Allende’s presidency, but most of them can be traced to the white elite being classist and racist as hell and the USA’s government choosing fascists to oppose Communism in the name of democracy, even when the Socialist president was democratically elected and was planning for a confirmation referendum by the end of 1973. One thing that accelerated economic scarcity and chaos in the last months of his presidency was a generalized trucker’s strike (in 1972), funded by the CIA. The Chilean trucker’s guild received protection from the dictatorship and has been the one union the far-right can count on. They were also striking and cutting roads in 2020, as the pandemic raged on, while having parties with sex workers and blackjack in the middle of the road. We Chileans loathe trucker’s unions, mostly because they have undermined the resurrection of our railroads (which were the one thing keeping the country supplied back in 1972). Cutting roads using the same heavy transport that transports goods is an extremely effective and low-cost way to keep a country on the ropes. This is why I’m scared of what will happen when US truckers start copying that Canadian minority. This entire situation reeks of Bannon f**kery, so remain vigilant. They will try to destabilize Biden, and you may not like him or his policies, but you also know the alternative.

It’s no surprise that the alternative is creating its very own vocabulary to soften and justify its track record. In Chile, you can tell a lot about a person from the words they use to refer to the dictatorship; if they use the words “dictatorship,” “military coup,” and “dictator” to refer to Pinochet, that means they’re of reasonable minds regardless of their political leanings. When they say “military government” or “president” when referring to Pinochet and any word other than “coup,” we’re entering dangerous territory. If you’re wondering if there’s can be any term to not say “coup,” there isn’t. They refer to it as the “pronunciamiento military,” which could be translated as “the military statement.” The GOP is doing something similar to that; the masters are learning from their pupils. It doesn’t work; it’s just more of the “owning the libs” trolling, but it doesn’t mean you shouldn’t call it out if you hear it. More so considering their coup was a tragedy and a turning point, even though it was a total shitshow.


← During These Trying Times, Why Not Watch People Belly Flop On 'Jimmy Kimmel: Live'? | Review: Paul Thomas Anderson's Messy And Chaotic 'Licorice Pizza' Is The Stuff Of Life Itself →