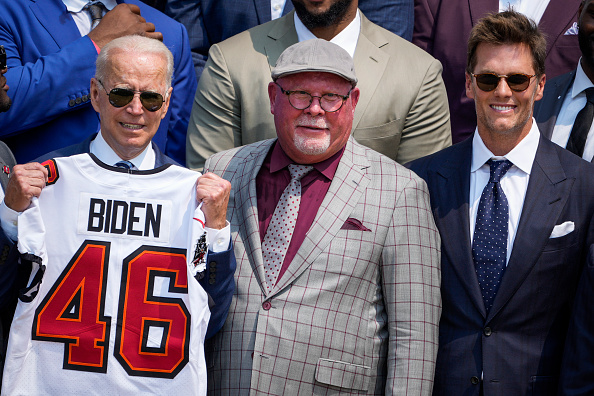 Honestly, I wouldn’t have even known that the Tampa Bay Bucs had visited the White House yesterday had a friend and fan of Tom Brady (Mat, of SNL recap fame) not apprised me of it. I do not like Tom Brady. I didn’t like Tom Brady before I knew of his association with Donald Trump. I haven’t liked Tom Brady since the day he replaced Drew Bledsoe, and the only time I have ever rooted for him was when he was playing the Phillip Rivers-led Chargers because Philip Rivers is the worst person in the NFL (watching him lead my team, the Colts, last year was pure misery).

That said, Brady delivered a couple of decent zingers at the expense of Donald Trump during the White House ceremony yesterday, which I appreciated, even if Brady almost certainly delivered them with his signature wooden, reading-off-of-cue cards cadence because he’s a robot. An evil robot who steals medicine from old people. From the NYTimes:

Mr. Brady first needled Mr. Trump’s baseless claims that he actually won the 2020 presidential election, which many Trump supporters still believe. The quarterback said many people did not believe the Buccaneers could win the championship last year.

“I think about 40 percent of the people still don’t think we won,” Mr. Brady said.
“I understand that,” Mr. Biden said.
Mr. Brady turned to Mr. Biden. “You understand that, Mr. President?” he said.
Mr. Biden smiled. “I understand that,” he said again.
“Yeah,” Mr. Brady continued. “And personally, you know, it’s nice for me to be back here. We had a game in Chicago where I forgot what down it was. I lost track of one down in 21 years of playing, and they started calling me ‘Sleepy Tom.’ Why would they do that to me?”
Mr. Biden — whom Mr. Trump frequently called “Sleepy Joe” during the campaign — played along. “I don’t know,” he said.

Not bad for a Redmayne. Still, Brady is the ultimate proof that good guys don’t always win, although at least he made Bill Belichick look bad by virtue of winning without him while the Pats went a woeful 7-9. Remember that, Mat?

Joe took a moment to make jokes, too. “A lot has been made about the fact that we have the oldest coach ever to win a Super Bowl and the oldest quarterback to win the Super Bowl. Well, I’ll tell you right now: You won’t hear any jokes about that from me. As far as I’m concerned, there’s nothing wrong with being the oldest guy to make it to the mountaintop.”

In the meantime, I also look forward to Giannis Antetokounmpo and the Milwaukee Bucs visiting the White House after winning the NBA finals last night. Assuming they do, they’ll be the first NBA team to visit the White House since the Obama Administration.