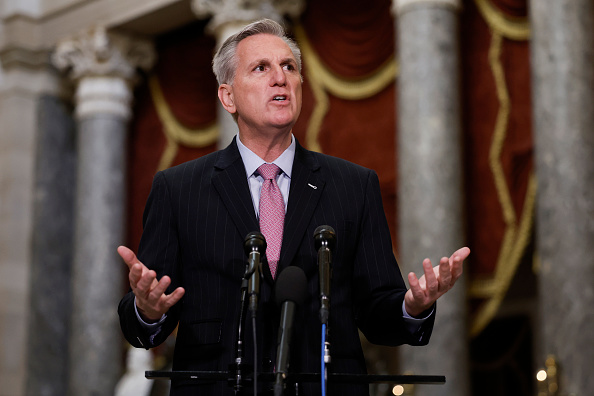 I don’t know how this is going to go over with you, but I’m going to write it anyway: America’s security classification system is bullshit. Complete mishegas. Is there a difference between Trump and Biden (and now Pence) as it pertains to classified documents? Absolutely, but less in the possession of documents and more in the refusal to give them back.

The media has had us believe that finding top secret documents in the garage of a President, next to his Corvette, is a huge scandal, but that’s because Americans do not have even a basic understanding of the security classification system. We don’t understand just how much the government classified (everything), or how many people have security clearance (millions), or even what sorts of things are classified as top secret (all the things). Instead of examining the system, the media has turned it into partisan warfare: They’re counting the number of documents and keeping score. Cable news is allowing both sides to weaponize the issue against each other, but no one in the media has bothered to investigate what it is, exactly, that is being weaponized.

This morning, Jon Stewart had on his podcast Matthew Connelly, professor of history at Columbia and the author of the forthcoming book The Declassification Engine: What History Reveals about America’s Top Secrets. Honestly, I could not have imagined a duller subject when I started listening, but it was fascinating to gain insights from an academic, someone who actually knows what the hell they are talking about instead of someone talking about it purely in terms of Democrats and Republicans.

After an hour with Connelly, anyone who listens would probably agree: What Biden, Hillary, and Pence are being accused of is bullshit, and even some of what Trump was being accused of is bullshit (the fact that he had classified docs at Mar a Lago wasn’t nearly as big a deal as his initial refusal to hand the documents over, which was a big deal).

Here are the bullet points of what I learned from Connelly:

— The United States classifies something every 3 seconds — 90 million things were classified as Top Secret in 2012. That was over 10 years ago. Now, the State Department produces over 2 billion emails per day. The country spends $18 billion on classification a year, which is more than is spent on the Treasury Department. People within the bureaucracy often can’t decide amongst each other what should be classified so they classify everything. The system can no longer cope with the amount of information that is classified. Overclassification is a serious problem within our government.

— Much of what is classified is publicly known, but overclassification is so bad that many of the bureaucrats within the national security regime don’t even know that much of the public already knows about what they think is secret because they live in a weird bubble of classified secrets.

— One of the things, for instance, that Hillary Clinton got in trouble over was sharing media reports — newspaper articles — amongst her aides because those media reports were discussing programs that were still classified (like the drone program in Pakistan). So, even though we all knew about the drone program because of public reporting, people within the national security department weren’t allowed to acknowledge it without revealing classified information. Newspaper clippings are the sorts of things that can fall under Top Secret classification.

— In fact, almost all of the information revealed in the Wikileaks dump was already public information, but Wikileaks reported it from documents that were stamped Top Secret, which made it illegal.

— Redactions in classified information, by and large, have nothing to do with protecting security interests and everything to do with creating a narrative, or a certain version of what happened that bureaucrats think is safe to save with the rest of us. It’s basically censorship.

— The classification process began under the Manhattan Project. Ironically, in 1954, after J. Robert Oppenheimer began to express misgivings about the use of the hydrogen bomb, the United States stripped his security clearance to drive him out. One of the men they put on the three-panel jury to determine whether Oppenheimer should have his security clearance revoked believed that Jews were an inherent security risk. THIS IS THE BASIS OF THE CLASSIFICATION REGIME.

— Systematically, despite the fact that 1.3 million people have top secret security clearance, it’s been difficult for decades for anyone who is not a straight white man to get security clearance. In other words, the entire classification regime is designed to protect white dudes.

— The vast majority of Americans who make FOIA requests from the government are not journalists or academics. They are commercial firms that seek information they can store in databases and sell. More than 90 percent of FOIA requests are from information brokers.

Source: The Problem with Jon Stewart