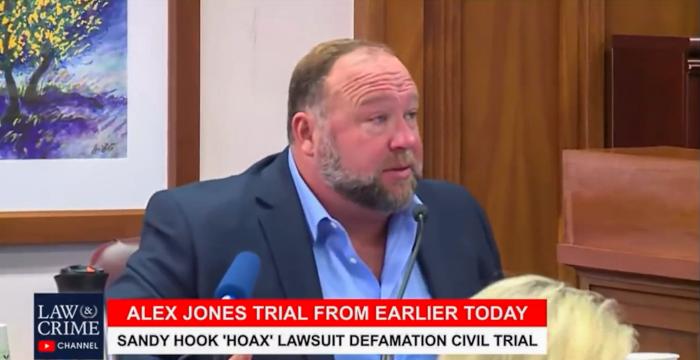 I hate true crime. I like pretend true crime - shout out to all my fellow Only Murders In the Building fans! — but I can never forget that true crime is about real victims and, even at its best, still feels exploitative. That’s a subjective view, and I don’t judge fans of the genre. But I’ve found a place where true crime fans and fiction lovers can come together as one. That place, strangely, is Twitter. Normally a morass of terrible people, bad intentions, and misconstrued comedy, Twitter users have discovered common ground thanks to the live debacle that is the Alex Jones civil trial.

I won’t get too much into who Alex Jones is. We all know by now that he’s the boisterous, red-faced, strangely hamlike man who runs InfoWars, the “news and entertainment” front for Jones’s many pyramid schemes and snake oil sales. We know that Jones, whose voice could charitably be described as that of a bulldog making passionate love to a sink garbage disposal, has been lying for years about every mass shooting, calling them false flag operations, and accusing the parents of dead children of making up their grief. Jones isn’t unique in his awfulness, and InfoWars is extremely popular among the chemtrails and insurrectionist crowd. It’s that popularity that makes Jones such a threat, and as a result, the parents of children tragically cut down in the Sandy Hook massacre have been forced to sue Alex Jones for defamation. They won their trial earlier this year, and the question before the jury now is how much Jones should be forced to pay in exchange for years of abuse, accusations, and death threats heaped upon these bereaved parents. Jones has spent his free time calling the trial a farce on InfoWars, accusing the judge of being involved with pedophiles, and even skipped multiple court sessions to broadcast lies instead. He and his lawyer refused to participate during discovery and so much of this phase has involved Jones faking a cough and lying on the stand about his financials, on-air statements, and lack of records. His lawyer, F. Andino Reyna, is a real piece of work. He’s repeatedly called for a mistrial, flaked on several important legal matters, and at one point flipped the bird at the plaintiff’s lawyer, Mark Bankston. Long story short, he’s bad at his job. But we didn’t know how bad until today.

Wow. Sandy Hook parents' lawyer is revealing that Alex Jones' lawyers sent him the contents of Jones' phone BY MISTAKE.

"12 days ago, your attorneys messed up and sent me a digital copy of every text" Jones has sent for years.

"You know what perjury is?" the lawyer asks.

Note: I’m so far from a legal eagle that I’m not even an in-the-know crow. My understanding of the legal system is so small even the Large Hadron Collider can’t find it. But Bankston informed Reyna of the error. Reyna did nothing. I’m pretty sure that means it’s all admissible. And it’s got everything, including multiple examples of perjury and InfoWars’ financial information.

These texts and emails are FINALLY revealing financials behind Infowars.

There are a number of really great threads on Twitter right now that can keep you updated on the trial better than I can. The important thing to remember is that Alex Jones is not only a rancid beef haunch, he’s also a terrible, terrible person. He’s certainly one of the worst and most influential in American media. He peddles scare tactics, racism, anti-vaccine propaganda, and a virulent strain of American nationalism that starkly contrasts to what the nation could be. He deserves every bit of punishment headed his way, and no doubt much more. This phone dump has made him vulnerable in ways his detractors were previously unable to do. It cut right through the bullshit and starkly laid out every instance of manipulation, dishonesty, and perjury. And who knows; it may have opened him up to a whole lot more, if the January 6 committee or other organizations take an interest.

Sandy Hook parents' lawyer on a hot mic during a recess: "You know what nobody's thought about yet? What happens when that phone goes to law enforcement."

If his lawyer weren’t such an unpleasant person I’d think he was tanking the case on purpose. I don’t think his error is enough to get it thrown out, and I don’t imagine he’s willing to fall on the professional sword for a man like Alex Jones. That leaves simple incompetence as the only excuse, showing Jones is vulnerable to the same problems that plagued the Trump administration. If you’re an awful, incompetent person, pretty soon only awful, incompetent people will work for you. It couldn’t happen to a more deserving guy.

Because on Law & Order. we wouldn’t have let a lawyer do something that dumb.


← 'She Said' in a Post Depp-Heard World | 5 Shows After Dark: 'Reservation Dogs' Season 2 on FX on Hulu, 'The Green Planet' First Season Finale →