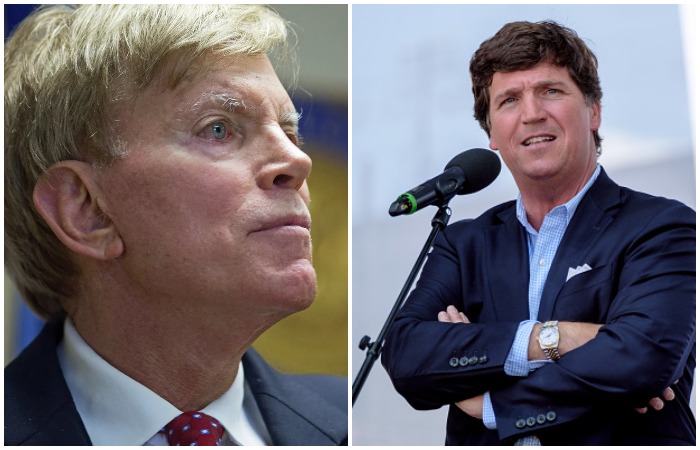 After a Racist Massacre in Buffalo, Tucker Carlson Will Invariably Paint Himself as Victim

An 18-year-old man who had expressed an interest in a murder-suicide after graduation last year followed through on that threat on Saturday, driving an hour to Buffalo to target a grocery store in a Black neighborhood. He killed 10 people, most of whom were Black. The shooter cited the Great White Replacement Theory as the motive, the same conspiracy theory that motivated the mass shootings inside a Pittsburgh synagogue in 2018 and another the following year inside of a Walmart in El Paso. (It’s also worth noting that the Buffalo shooting was one of several fatal mass shootings in America over the weekend).

No mass shooting can be attributed to one factor. You can blame easy access to guns (how does an 18-year-old get access to tactical helmets and armor?) and you can blame it on mental health or the spread of dangerously racist hate speech on social media, but this shooting in particular — like the shootings in Pittsburgh and El Paso — you can blame not just on the white supremacist fringes of 4Chan but on a Republican party that has pushed the idea that Jews are conspiring to replace white people with non-white minorities into the mainstream. Liz Cheney herself directs the blame onto the House GOP:

The House GOP leadership has enabled white nationalism, white supremacy, and anti-semitism. History has taught us that what begins with words ends in far worse. @GOP leaders must renounce and reject these views and those who hold them.

This is on Marjorie Taylor Greene and Matt Gaetz, and on Jim Jordan and Kevin McCarthy for enabling them. But this is also on Tucker Carlson, who has been promoting the replacement theory on his show for years, echoing the words of David Duke on the most popular primetime news program in America:

This is the consequence of an extreme radical, a right-wing cult leader who is actively trying to start an insurrection under the guise of patriotic nationalism from his isolated home in backwoods Maine, where he tapes his show every night. From the NYTimes:

No public figure has promoted replacement theory more loudly or relentlessly than the Fox host Tucker Carlson, who has made elite-led demographic change a central theme of his show since joining Fox’s prime-time lineup in 2016. A Times investigation published this month showed that in more than 400 episodes of his show, Mr. Carlson has amplified the notion that Democratic politicians and other assorted elites want to force demographic change through immigration, and his producers sometimes scoured his show’s raw material from the same dark corners of the internet that the Buffalo suspect did.

“It’s not a pipeline. It’s an open sewer,” said Chris Stirewalt, a former Fox News political editor who was fired in 2020.

The one thing, unfortunately, that Tucker Carlson has figured out how to do with his millions of viewers that David Duke did not is this: He knows how to deflect this criticism, and he does so by positioning his own viewers as victims. Tonight he will go on his show, and he will say something like this:

“There was a shooting in Buffalo this weekend perpetrated by a man motivated by racism. Of course, it is awful! But how dare the mainstream media [a category of which the most popular news program in America apparently does not fit] blame Republicans for this, and specifically my show. Of course, we don’t condone violence of any type! It is appalling that this unhinged 18-year-old would target Black people, and we condemn this type of violence with our full hearts.

But how dare the media blame us for this. How dare they! Millions of patriotic Americans watch my show every night, and you don’t see them flooding into grocery stores to kill Black Americans. This was the act of one mentally unwell young man, and the real conspiracy here is how the liberal media blames the God-fearing law-abiding viewers of this television program every time there is a mass shooting in America. That’s the real conspiracy. That’s what we should be angry about! We should be mad as hell that the radical left tries to pin these mass murderings on me, to paint innocent viewers as racists that America can dispose of because of the actions of one man who was radicalized by Big Tech. They want to scapegoat us. They want to turn us into the enemy. And that’s how they win. That’s how the establishment stays in power. They blame us, and then they discount us as racists, and they cancel us, and then they take our jobs. That’s the cycle in America now. We are the victims of a system that seeks to cast us as racist wrongdoers every time an evil person commits an atrocious act in America. How dare they.”

After Tucker Carlson’s program ends, after he has stirred up the anger in millions of white viewers who now see themselves as victims, Lachlan Murdoch will call Carlson in Maine and congratulate him for another successful program, another show where Carlson manages to steer the conversation away from himself, the Republicans, and the “news” network that enables them and toward everyone else, because the real victim — as always — is Tucker Carlson.


← Box Office Report: 'Multiverse of Madness' Stays on Top as 'Firestarter' Burns Out | John Oliver Is Dying To Tell You Why Electric Companies Have A Monopoly On Their Business →