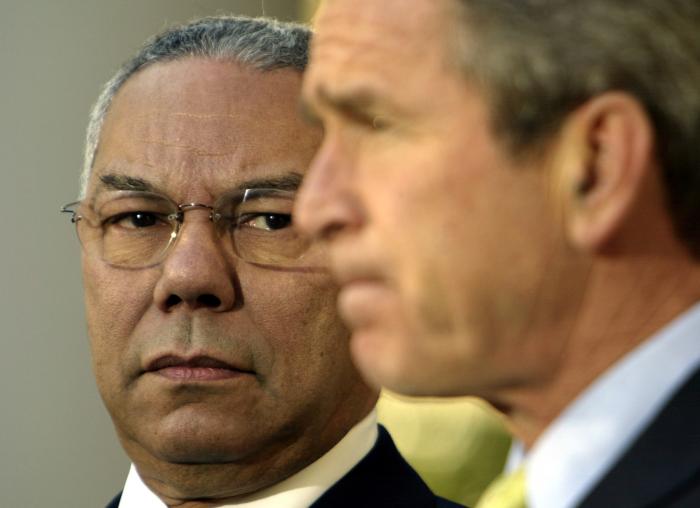 A Tepid Acknowledgment of Something Good Colin Powell Said

Leftist US readers will have me tarred and feathered for this one, but first, I am a Chilean Leftist, literally registered as a party member of a Leftist Coalition … my churchgoing has been lacking since my Uni days, but guys, I’ve lived a third of my life dealing with people that think the Communist Party is too right-leaning. I mean, that’s mostly because they are authoritarian and sneak their way into everything like James Corden. But still, our Centrists are your … Elizabeth Warrens.

Because I have to give Colin Powell a slight tip of the hat. Recognize something that he said once that was, for somebody in his position, bold and a pretty big deal. But I can’t acknowledge that while ignoring the things Colin Powell said and did in the exact same set of sentences.

I can’t deny the fact that Colin Powell meant a lot for millions of Black Americans, and in his latter years, he was mostly on the right side of history by ditching the GOP. He seemed like an overall decent, interesting character. An archetypal tragical hero, tainting his entire legacy of historical Firsts, Only Different by supporting the exact kind of war his own doctrine warned against. I don’t buy his claim that he was working on faulty intelligence, integrity is no match for selective blinders, but at least he showed regrets.

So … back in February 2003, two weeks after his speech to the U.N. (which, by the way and if you ever had any doubts, none of us outside the US bought), he attended a Youth Town Hall hosted by BET. It was another pit stop in his tour of “Iraq totally has WMDs and it’s a risk to its neighbors and the USA even though they don’t have anything that can hit is but let’s invade anyway just to be on the safe side, also they’re financing Al-Qaeda, remember those guys?” The questions were pointed and addressed the concerns most of us outside the US knew were going to be realities. Nevertheless, Powell’s carefully constructed talking points blitzed over them like the first phase of any US military operation. But one question, by a high schooler, had him admitting something no one else of his seniority in the US Government had ever said. I’ll just quote it:

QUESTION: My name is James Dubek (ph). My question is that undoubtedly the United States considers itself the moral superior in this Iraq confrontation. My question is, despite past events such as in 1973 when the United States staged a coup in Chile on September 11th, despite the wishes of the Chilean populace against the coup, and in support — and the populace in support of the democratically elected President Salvador Allende, the CIA, regardless, supported the coup of Augusto Pinochet and that resulted in mass deaths.

And my question is: Why does the United States now consider itself the moral superior enough to have nuclear weapons while Iraq — while demanding that Iraq disarm, yet we still maintain our weapons?

SECRETARY POWELL: It’s not a matter of us believing that we are morally superior. (PRO-INVASION TALKING POINTS, SKIPPING THEM).

With respect to your earlier comment about Chile in the 1970s and what happened with Mr. Allende, it is not a part of American history that we’re proud of. We now have a more accountable way of handling such matters and we have worked with Chile to help it put in place a responsible democracy.

One of the proudest moments of my life was going to Chile in the late ’80s and speaking to all of the military officers in the Chilean armed forces, all the senior officers, and talking to them about democracy and elected representative government and how generals such as them and me — I was a general at the time — are accountable to civilian authority so that incidents of that kind or situations of that kind no longer arose.

There you have it, that one good thing Colin Powell said. Admitting that the US intervened in Chile’s politics, how they sided and trained fascists against not just a democratically elected president, but one who valued democracy enough to call a referendum on the future of his government, to address the very crisis effected by the CIA, Nixon’s administration and Chile’s elites. And not just that, singling it out as a shameful episode in the history of the United States. Thank you.

It got him into hot water, as it hurt the precious feelings of one William D. Rogers, who was the Assistant Secretary of State for Inter-American Affairs under Nixon and Kissinger. He lost his shit and got the State Department to distance itself from its own boss. While in the path to war. It was all promptly buried, more so in Chile’s mainstream press at the time, as both major newspaper groups are owned by rightwingers and/or were financed by the CIA at the time. It did make the front page of the slightly less right-wing one, La Tercera, on one of the corners.

It meant something, back in the day, to have someone in Bush’s administration acknowledging how they broke our country. It helped me humanize someone from a group of people I had nothing but hate for, that there was something different about this one guy.

(Yes, back then, Chile was part of the UN’s Security Council, while negotiating an FTA with the US, so they wanted to get into our good graces. Didn’t work, but still, mad props.)

However, he still said all that after two verbal paragraphs defending the invasion of Iraq, insisting on the likelihood that Saddam had WMDs and that he was a risk to the region and the US. It was right there, in front of him! Hyping poorly thought out foreign policy while mentioning one of the best examples of poorly thought out foreign policy. Of course, the intervention in Chile didn’t blow up in D.C.’s face, EXCEPT IT DID.

That’s the banality of the US’ bipartisan self-image. It is also its tragic error, a fixation with moving forward and extolling its own virtues without pausing: Sure we did awful things to Indigenous people and slavery was a horrible blot in our past, but hey, we did elect Obama and Dances With Wolves won all the Oscars!

Colin Powell almost got it. He said something that could’ve translated into something valuable, but it remained as words, despite the powers of his investiture.

I do have to laugh at his perception of his visit to Chile in the 80s: That he thought those military officers would care about what a Black man had to say it’s adorable. Pinochet literally raged against the West German Army for losing their 1940s philosophies.

I have no beef with Mr. Powell, that’s up for the Iraquis to judge. Let’s hope in 2033 they get an actual apology.

← Mark Wahlberg Stars Alongside Tom Holland in the Role Wahlberg Aged Out Of in the 'Uncharted' Trailer | Watch the Trailer for 'Ambulance,' the New Movie from Michael Bay ... Wait, Come Back! Don't Go! →