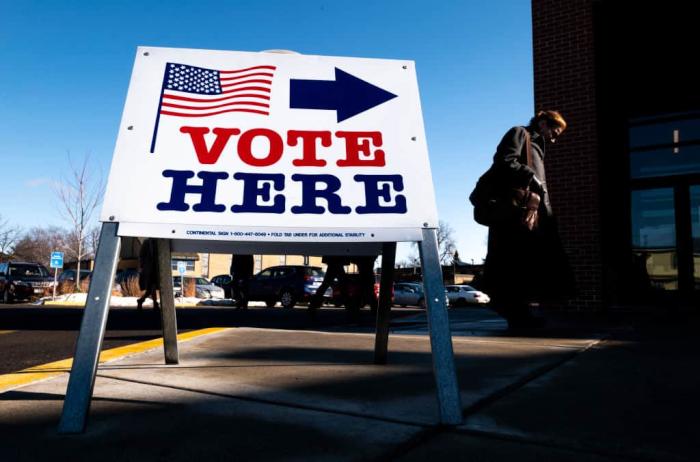 A Peek at Several Crucial Races Ahead of the Midterms

We’re about a month out from the mid-term elections here in the United States. Nominally, we have a 50-50 political split between Republicans and Democrats in Washington right now. But we all know that’s not really the case; thank you, Kyrsten Sinema and Joe Manchin. Every race is important this year. Every race is important EVERY year but this year it feels like democracy is actually on the line in the mid-terms. White supremacists and Christian Nationalists are taking over the Republican party, and the more power they gain at the state and local levels, the harder it becomes to prevent backward, bigoted policies from being put in place. Here’s a look at some of the races around the country and what’s at stake up and down the ballots.

A is for Arkansas, where Sarah Huckabee Sanders is running for Governor. She is a dangerous idiot whom you may remember as one of TFG’s Press Secretaries. The Republican candidate for Lieutenant Governor is current Arkansas Attorney General Leslie Rutledge. You may remember Rutledge from the shellacking Jon Stewart gave her last week.

Together these two would be an absolute disaster for civil and voting rights. But we all know that. Let’s look at who the Democrats are running in that race. According to Ballotpedia Chris Jones has an M.S. in nuclear engineering/technology and policy, and a Ph.D. in urban planning, both from M.I.T. He supports high-quality early education, he wants to devote funds to getting more kids up to the appropriate reading level and wants to give older students access to technical schools and workforce training scholarships. He also wants to provide access to low-to-no-cost community college degrees for everyone in the state. His platform also includes criminal justice reform, boosting small businesses, and developing “a just and equitable cannabis industry that encourages economic growth, funds education programs, and will protect police officers and citizens alike.” He promises to defend women’s reproductive rights, supports common sense gun control laws, and will do more to build resources for mental healthcare in Arkansas. On paper, Chris Jones looks like the kind of politician we would all benefit from having in government. You should elect him, Arkansas.

F is for Florida where things look worse and worse every day if I’m going to be brutally honest with y’all. According to Ballotpedia, the Democratic Party of Florida needs to gain five or more seats to take control of the chamber in 2022. The Republican Party needs to lose three or fewer seats to maintain control. Historically Florida is pretty very red. But I constantly think “this will be the step too far taken by Republicans that swings the state the other way.” So far, no joy on that. But I cannot believe that the majority of Floridians will take Desantis’ sh*t in perpetuity. Charlie Crist, a former REPUBLICAN governor of Florida, is running against DeSantis next month as a Democrat. If anyone’s got a shot at shutting down DeSantis, I guess it’s Crist.

Also in Florida, Val Demmings is running against Marco Rubio for Senate this year. If it feels like Rubio has been quiet lately it’s only because DeSantis has been sucking all of the air out of the room by being a complete assh*le. Demmings currently represents Florida’s 10th Congressional District in the U.S. House of Representatives where she’s on the House Judiciary, Homeland Security, and Intelligence Committees. As a former cop, Orlando’s first female Chief of Police, she should appeal to the law-and-order types. And she rides a Harley! Not only is she cooler than Rubio but she’s also more likely to help usher Florida into the 21st century instead of continuing to let it slide backward with regressive policy decisions.

G is for Georgia. Sigh. Oh, Georgia. I know you don’t REALLY want a brain-damaged liar to represent you in Washington. Everyone knows he’s a brain-damaged liar. I am not sure how many times, and in different ways, we can warn you about this guy. If you’re backing him for religious reasons, you can stop doing that. Raphael Warnock, who is running against Walker, is an actual for-real Reverend in the Baptist church. And he’s already doing the job. He won a special election runoff in January of 2021 and there’s really no reason to replace him with … a brain-damaged liar. Even the current Lieutenant Governor knows what’s up.

Georgia Lt. Gov. Geoff Duncan, a Republican, to NBC on Herschel Walker: "I think this is part of the Donald Trump hangover. We can never get to this place again. As Republicans, this is a horrible place for us to be — not just here in Georgia, but in other parts of the country."

I would also be remiss if I failed to remind you that Stacey Abrams is running against Brian Kemp for Governor of Georgia and we should all do whatever we can to get her into office. I can’t think of any other woman in politics today who I’d rather see on a path to the White House than Stacey. She helped pull our butts out of the fire in 2020! Let’s pay her back by supporting her race in Georgia.

P is for Pennsylvania. Not only do we have Doug Mastriano running on the Republican ticket for Governor, we’ve also got celebrity doctor (eye roll) Mehmet Oz running for Senate. Mastriano is an election denier who supports TFG’s claim that he won the 2020 election (he did not.) He’s also a member of this Christian Nationalism movement that continues on a troubling upward trajectory in the races this year. Mehmet Oz, who probably still lives in New Jersey, gave a speech in front of Hitler’s car over the weekend.

I don't know who needs to hear this, but if you're asking donors for money in front of Hitler’s literal car, then you shouldn't be running for U.S. Senate https://t.co/68X6ulCPQa

Pennsylvania, as one of your near neighbors, I beg of you not to unleash these two on the rest of us. Josh Shapiro is running against Mastriano. Shapiro has served as Pennsylvania’s Attorney General since 2017. He supports abortion rights and will defend access to reproductive health care. He will work toward Black economic equity. He’s tough on crime but supports criminal justice and bail reforms. Shapiro stands with the LGBTQ+ community and will ban discrimination against LGBTQ+ individuals. He says he will expand hate crime laws to cover Pa’s LGBTQ+ communities, invest in mental health resources to support LGBTQ+ youth, and ban conversion therapy for minors, according to his website. He sounds like a good guy, as far as politicians go. Better than the alternative for sure.

John Fetterman, on the other hand, seems like a real ballbuster. That’s not necessarily a bad thing. A lifelong Pennsylvanian, Fetterman has been a small-town mayor and the state’s Lieutenant Governor. He has a Master’s from Harvard in Public Policy and has been a vocal advocate for criminal justice reform. He has fought to free wrongfully convicted prisoners and promises to support the Equality Act in Senate for LGBTQ+ civil rights. He wants to expand voting rights, abolish the filibuster, and ban members of congress from trading stock. His wife, Gisele, is a “Dreamer” who came to America from Brasil, so he supports humane immigration policies. Fetterman also has some interesting ideas on maintaining the US’s position of “global leadership” that aren’t as toxic sounding as the right’s America First/MAGA catchphrases.

T is for Texas where Beto O’Rourke has a snowball’s chance in hell of winning the race for governor. But, I’m holding onto hope just a little bit longer. He’s shown Texas that he can be a firebrand and speak plainly - which Texas voters always say is important to them - so maybe? O’Rourke supports funding for public schools, whereas current Governor Abbott has underfunded them by about $4,000 per student. Beto also has ideas on how to improve Texas’ disastrous power grid situation. He’s also a proponent of common-sense solutions to gun control and immigration issues, which are perennially hot topics in Texas. He stands against Governor Abbot’s attacks on women’s reproductive freedoms and will fight for Texas’ first comprehensive nondiscrimination law for LGBTQ+ community members.

Imagine if Texas got rid of Abbott this year and Ted Cruz in the next election? Picture that in your mind for a moment. If we all imagine it together maybe we can will it into being. Can you imagine the state of Texas if it weren’t run by dangerous people who believe guns are the answer to everything?

There are races in every state that we should be aware of (but that article would be too long) because people like New Hampshire’s Republican Senate candidate Don Bolduc says things like this:

This will blow your mind. New Hampshire’s Republican Senate candidate Don Bolduc says abortion decisions “belong” to Republican “gentlemen” state representatives, and that “as a man”, women “get the best voice” when men decide how to regulate their rights. pic.twitter.com/zv4twOWdoU

Hopefully, the Democratic incumbent in that race, Maggie Hassan, can win a second term.

Even if they’re not top-of-the-ballot races, they’re important.

Marchant: If get all our Secretaries of State elected around the country like this, we take our country back pic.twitter.com/w7hFyD4Kkq

Secretaries of State are generally the chief election officials for their states. Remember that when you’re filling in your ballots, folks.


← Would You Watch Melissa Fumero and Randall Park in a 'Blockbuster' Netflix Series? | Bill Murray's Latest Defense Rings Hollow In Light of his Extensive History of Abuse →