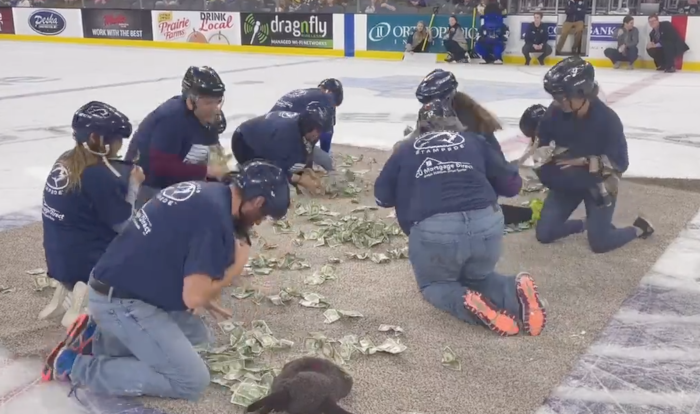 This Is Not OK, South Dakota

I’m sure the initial idea for this stunt was well-intentioned. I also suspect that the local hockey team behind this promotion, the Sioux Falls Stampede, as well as the company sponsoring it, CU Mortgage Direct, had no idea that it would go viral. But it did, and it is not a good look.

Below, you will see 10 South Dakota teachers. They are competing with one another to see who can scoop up the most money, which they will use to pay for additional classroom supplies for their students. Each of the teachers had to apply for this “honor” by explaining what they would do with the money.

“I hope … the absurdity of that image of teachers on their hands and knees in the middle of a hockey rink, trying to grab money, brings attention to the education funding needs that exist here in Sioux Falls, across South Dakota and across the U.S.,” a South Dakota state senator told The Washington Post. It’s a good reminder to parents ahead of the holiday break to give your kids’ teachers gift cards. Lots and lots of gift cards. Chances are, they’ll end up using them to buy classroom supplies for your kids, anyway.